We carry authentic Nauru Flags in both indoor and outdoor varieties. Our flags are proudly made in the United States from durable nylon and are printed with vibrant long-lasting inks. The Nauru national flag is often displayed at embassies, outside of businesses associated with Nauru, and at the homes of people who take great pride in their Nauru heritage.

Our indoor flags are finished with a pole hem and your choice of with or without golden fringe. Gold fringe is the traditional way to display an indoor flag, however, some people choose without fringe for a simple and clean look that is also less expensive. If you are looking for a complete indoor presentation set, our Build Your Own Indoor International Flag Set program allows you to select a durable nylon indoor Nauru Flag and choose between premium quality poles, bases, and ornaments, and tassel. For indoor applications, most buyers choose a 3ft. x 5ft. flag with an 8ft. pole, however, if you have a low ceiling, you may opt for a 7ft. pole, which is designed to work with drop ceilings. If you are looking for a very substantial international flag display, our 4ft. x 6ft. indoor flags can be paired with a 9ft. pole for our largest indoor display option.

Our outdoor international flags are finished with a canvas header and brass grommets and are offered in four sizes: 2ft. x 3ft., 3ft. x 5ft., 4ft. x 6ft., and 5ft. x 8ft., to fit any sized flagpole. Typically, outdoor flags are flown outside of government organizations, businesses, and institutions on in-ground and wall-mount flagpoles, however, some people also buy these flags to display their international pride at home. If you are looking for a wall-mount Nauru flag set to display outside of your home, our Build Your Own Outdoor International Flag Set program will allow you to choose between premium quality 6ft. poles and brackets to display the Nauru Flag on your front porch. Outdoor flags can also be displayed indoors on interior walls of your home with screws anchored in the wall to attach to the grommets.

In addition to the flags we offer for purchase, we maintain an archive of historical information about the Nauru flag, demographic data about Nauru, and free high resolution images of the Nauru flag for use in projects and on websites. 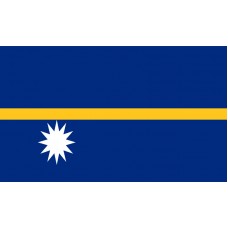 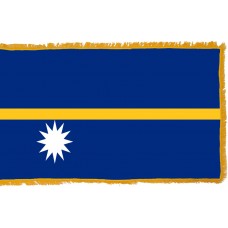 History of the Nauru Flag

The Nauru Flag consists of a blue field with a gold horizontal strip across the middle of it. In the bottom left hand corner of the flag is a 12-pointed white star. The blue color of the flag represents the Pacific Ocean and the gold stripe represents the equator. The position of the white 12-pointed star represents Nauru’s position below the equator and the white color represents the country’s phosphate which is the only major natural resource that the country has. The 12 points of the star represent the 12 original tribes of the island, which are, Eamwit, Eamwitmwit, Ranibok, Irutsi, Iruwa, Eamwidara, Eaoru, Emangum, Deiboe, Eano, Emea, and Iwi. The Nauru flag was adopted on January 31st, 1968 as a result of a competition that was held.

Nauru is the world's smallest island country (as well as the world's smallest independent republic) in the South Pacific Ocean. It does not share borders with any other countries, but its neighboring countries include, Kiribati, Marshall Islands, Tuvali, Vanuatu, and Papa New Guinea. It is one of the only countries that does not have an official capital city but the largest settlement where the majority of the administration occurs is in Yaren. Nauru is the least populated country in the world, following Vatican City. The island was first discovered in 1798 by a whale hunter named John Fearn. He referred to the country as the "pleasant island."

It is thought that Nauru was first occupied over 3,000 years ago by Micronesians and Polynesians. In 1888, Nauru became Germany's Marshall Islands Protectorate. In 1914, during WWI, the island was captured by the Australian army and in 1919, the administration of the island was controlled by the United Kingdom, Australia, and New Zealand governments. On August 26th, 1942, during WWII, the island was occupied by Japan until it was set free on September 13th, 1945 when it was given to the Australian Navy and army. In 1947, the island once again came under the protection of the United Kingdom, Australia, and New Zealand. In January 1966, Nauru became self-governing and achieved independence in 1968.

We offer free images of the Nauru Flag in four sizes (small, medium, large, and high resolution). These images are distributed royalty free for both personal and educational use and are ideal for use in projects and on websites. If you choose to use one of our images, attribution is appreciated, but not required.

The following html code snippets can be copied and pasted to add an image of the Nauru Flag to your website: