We carry authentic Belize Flags in both indoor and outdoor varieties. Our flags are proudly made in the United States from durable nylon and are printed with vibrant long-lasting inks. The Belize national flag is often displayed at embassies, outside of businesses associated with Belize, and at the homes of people who take great pride in their Belize heritage.

Our indoor flags are finished with a pole hem and your choice of with or without golden fringe. Gold fringe is the traditional way to display an indoor flag, however, some people choose without fringe for a simple and clean look that is also less expensive. If you are looking for a complete indoor presentation set, our Build Your Own Indoor International Flag Set program allows you to select a durable nylon indoor Belize Flag and choose between premium quality poles, bases, and ornaments, and tassel. For indoor applications, most buyers choose a 3ft. x 5ft. flag with an 8ft. pole, however, if you have a low ceiling, you may opt for a 7ft. pole, which is designed to work with drop ceilings. If you are looking for a very substantial international flag display, our 4ft. x 6ft. indoor flags can be paired with a 9ft. pole for our largest indoor display option.

Our outdoor international flags are finished with a canvas header and brass grommets and are offered in four sizes: 2ft. x 3ft., 3ft. x 5ft., 4ft. x 6ft., and 5ft. x 8ft., to fit any sized flagpole. Typically, outdoor flags are flown outside of government organizations, businesses, and institutions on in-ground and wall-mount flagpoles, however, some people also buy these flags to display their international pride at home. If you are looking for a wall-mount Belize flag set to display outside of your home, our Build Your Own Outdoor International Flag Set program will allow you to choose between premium quality 6ft. poles and brackets to display the Belize Flag on your front porch. Outdoor flags can also be displayed indoors on interior walls of your home with screws anchored in the wall to attach to the grommets.

In addition to the flags we offer for purchase, we maintain an archive of the audio and lyrics of the Belize National Anthem, historical information about the Belize flag, demographic data about Belize, and free high resolution images of the Belize flag for use in projects and on websites. 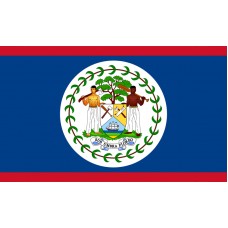 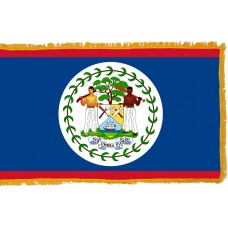 History of the Belize Flag

The Belize flag features a blue background with two horizontal red stripes: one across the top edge and one across the bottom edge. The center of the flag includes a white crest with two male figures standing barefoot on the grass on either side of the coat of arms, with a Mahogany tree sprouting up behind the coat of arms. The coat of arms shield is split into three sections; The upper left section depicts a paddle and maul upon a white background, the upper right section includes a saw and axe upon a yellow background. The bottom section shows a sailing ship on the blue ocean. Surrounding the crest is a circular formation of 50 mahogany leaves. A banner bearing the words, "Sub Umbra Floreo" sits at the base of the flag just below the feet of the two figures.

Of the two figures depicted on the flag, one is a mixed race (indigenous) male and the other is a Caucasian European male. The former is shouldering an axe and the latter an oar which symbolizes the county's association with boat building and logging. The tree emphasizes the historical importance of mahogany to Belize and the 50 mahogany leaves surrounding the scene are indicative of the year 1950 when opposition to British rule first began.

The words on the banner, "Sub Umbra Floreo" translate to "under the shade, I flourish" referring again to the mahogany tree. The main background color of blue on the Belize flag represents the The Peoples United Party (PUP) which was responsible for leading the country to independence. The red bands represent The United Democratic Party which is a national political party in Belize.

The earliest known peoples of Belize were the Mayan Indians who are reputed as being one of the most advanced civilizations of their time. Their achievements included the development of their own calendar and a form of writing called glyphs. Belize was was later used as a pirate hideout; The pirates used slave labor to harvest logs for use as lumber for ship building. What was at the time "British Honduras" became part of the British Commonwealth after the Second World War. The country became the independent nation of Belize following its exit from the British Commonwealth in 1981. After the British left, the country continued with a democratic government system based on the UK style parliament and has continued as a peaceful nation. Belize has trading agreements in place with the rest of the world including the USA and it is self-supportive because of its plentiful natural resources.

Land of the Free

O. Land of the Free by the Carib Sea,
Our manhood we pledge to thy liberty!
No tyrants here linger, despots must flee
This tranquil haven of democracy
The blood of our sires which hallows the sod,
Brought freedom from slavery oppression's rod,
By the might of truth and the grace of God,
No longer shall we be hewers of wood.

Arise! ye sons of the Baymen's clan,
Put on your armour, clear the land!
Drive back the tyrants, let despots flee -
Land of the Free by the Carib Sea!

Nature has blessed thee with wealth untold,
O'er mountains and valleys where prairies roll;
Our fathers, the Baymen, valiant and bold
Drove back the invader; this heritage hold
From proud Rio Hondo to old Sarstoon,
Through coral isle, over blue lagoon;
Keep watch with the angels, the stars and moon;
For freedom comes tomorrow's noon.

Arise! ye sons of the Baymen's clan,
Put on your armour, clear the land!
Drive back the tyrants, let despots flee -
Land of the Free by the Carib Sea!

We offer free images of the Belize Flag in four sizes (small, medium, large, and high resolution). These images are distributed royalty free for both personal and educational use and are ideal for use in projects and on websites. If you choose to use one of our images, attribution is appreciated, but not required.

The following html code snippets can be copied and pasted to add an image of the Belize Flag to your website: