We carry authentic Oman Flags in both indoor and outdoor varieties. Our flags are proudly made in the United States from durable nylon and are printed with vibrant long-lasting inks. The Oman national flag is often displayed at embassies, outside of businesses associated with Oman, and at the homes of people who take great pride in their Oman heritage.

Our indoor flags are finished with a pole hem and your choice of with or without golden fringe. Gold fringe is the traditional way to display an indoor flag, however, some people choose without fringe for a simple and clean look that is also less expensive. If you are looking for a complete indoor presentation set, our Build Your Own Indoor International Flag Set program allows you to select a durable nylon indoor Oman Flag and choose between premium quality poles, bases, and ornaments, and tassel. For indoor applications, most buyers choose a 3ft. x 5ft. flag with an 8ft. pole, however, if you have a low ceiling, you may opt for a 7ft. pole, which is designed to work with drop ceilings. If you are looking for a very substantial international flag display, our 4ft. x 6ft. indoor flags can be paired with a 9ft. pole for our largest indoor display option.

Our outdoor international flags are finished with a canvas header and brass grommets and are offered in four sizes: 2ft. x 3ft., 3ft. x 5ft., 4ft. x 6ft., and 5ft. x 8ft., to fit any sized flagpole. Typically, outdoor flags are flown outside of government organizations, businesses, and institutions on in-ground and wall-mount flagpoles, however, some people also buy these flags to display their international pride at home. If you are looking for a wall-mount Oman flag set to display outside of your home, our Build Your Own Outdoor International Flag Set program will allow you to choose between premium quality 6ft. poles and brackets to display the Oman Flag on your front porch. Outdoor flags can also be displayed indoors on interior walls of your home with screws anchored in the wall to attach to the grommets.

In addition to the flags we offer for purchase, we maintain an archive of the audio and lyrics of the Oman National Anthem, historical information about the Oman flag, demographic data about Oman, and free high resolution images of the Oman flag for use in projects and on websites. 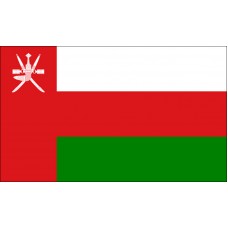 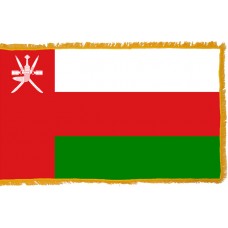 History of the Oman Flag

The Oman Flag features three horizontal bands in the colors of white, red, and green. On the left hand side of the flag is a vertical red band which has the national emblem of Oman in the top left-hand corner. The national emblem is a "khanjar" (which is a dagger) on top of two crossed over swords. The green color of the flag represents the agriculture and fertility of the country as well as the "Jebel Akhdar" which are the "Green Mountains." The white color represents peace and the red color represents the battles for their country and is also a color that is commonly used on the Arabic flag. The Oman Flag was adopted in 1970 and before the new flag was adopted, the former flag was just a plain red flag, known as the "Sultanat of Musca." The national emblem, which dates back to the 18th Century, represents manhood and bravery.

Oman is an Arab country (the oldest Arab state as well as the oldest, independent, Arab state) that shares borders with the Arabian Sea, Yemen, Saudi Arabia, and United Arab Emirates. The capital city of Oman is Muscat. The economy in Oman is very reliant on its oil and gas exports (Oman can produce 900,000 barrels a day of oil) and it relies on tourism. It is thought to be the fasting growing tourist destination in the middle East. It is home to some beautiful historical sights and monuments and the capital city, Muscat, was recently voted as the second-best city in the world to visit.

Muscat is home to one of the grandest buildings, "The Sultan Qaboos Grand Mosque." The mosque was built using 300,000 tons of sandstone and it took over 6 years to complete. It is also home to the Muscat Clock Tower which is the largest building that Oman has. The "Mutrah Souq," also in Muscat is one of the largest and very famous markets, full of colorful shops and displays. In Northern Oman, 100 tombs that are shaped like beehives sit on the hilltop and date back from 3,000-2,000 BC. Another city in Oman that is popular with visitors is "Nizwa." The city is full of markets (animal and vegetable) as well as castles with Portuguese cannons. Oman is sometimes referred to as "the best kept secret in the world of birdwatching" as birds from 3 different continents can be seen here.

In 1497, the Portuguese arrived in Oman, and between 1507-1650, they occupied the city of Muscat, even building and fortifying the city. In 1581, Oman was captured by the Ottoman Empire and was under their ruling until they were pushed out in 1741 by the leader of the Omani tribe. In 1749, the Al Bu Said dynasty came into power and since then, the Sultans have remained and are currently still in power.

We offer free images of the Oman Flag in four sizes (small, medium, large, and high resolution). These images are distributed royalty free for both personal and educational use and are ideal for use in projects and on websites. If you choose to use one of our images, attribution is appreciated, but not required.

The following html code snippets can be copied and pasted to add an image of the Oman Flag to your website: