We carry authentic Kenya Flags in both indoor and outdoor varieties. Our flags are proudly made in the United States from durable nylon and are printed with vibrant long-lasting inks. The Kenya national flag is often displayed at embassies, outside of businesses associated with Kenya, and at the homes of people who take great pride in their Kenyan heritage.

Our indoor flags are finished with a pole hem and your choice of with or without golden fringe. Gold fringe is the traditional way to display an indoor flag, however, some people choose without fringe for a simple and clean look that is also less expensive. If you are looking for a complete indoor presentation set, our Build Your Own Indoor International Flag Set program allows you to select a durable nylon indoor Kenya Flag and choose between premium quality poles, bases, and ornaments, and tassel. For indoor applications, most buyers choose a 3ft. x 5ft. flag with an 8ft. pole, however, if you have a low ceiling, you may opt for a 7ft. pole, which is designed to work with drop ceilings. If you are looking for a very substantial international flag display, our 4ft. x 6ft. indoor flags can be paired with a 9ft. pole for our largest indoor display option.

Our outdoor international flags are finished with a canvas header and brass grommets and are offered in four sizes: 2ft. x 3ft., 3ft. x 5ft., 4ft. x 6ft., and 5ft. x 8ft., to fit any sized flagpole. Typically, outdoor flags are flown outside of government organizations, businesses, and institutions on in-ground and wall-mount flagpoles, however, some people also buy these flags to display their international pride at home. If you are looking for a wall-mount Kenya flag set to display outside of your home, our Build Your Own Outdoor International Flag Set program will allow you to choose between premium quality 6ft. poles and brackets to display the Kenya Flag on your front porch. Outdoor flags can also be displayed indoors on interior walls of your home with screws anchored in the wall to attach to the grommets.

In addition to the flags we offer for purchase, we maintain an archive of the audio and lyrics of the Kenya National Anthem, historical information about the Kenya flag, demographic data about Kenya, and free high resolution images of the Kenya flag for use in projects and on websites. 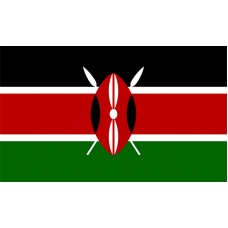 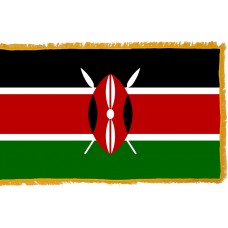 History of the Kenyan Flag

The Kenya flag features a horizontal tricolor design with a central emblem. The colors are black at the top, red in the center, and green at the bottom. In between these three bands are two white stripes. The central emblem of the flag is a Maasai shield in front of two spears. The black, red, and green colors are those of the Kenya African National Unity (KANU) party, which successfully saw Kenya achieve independence in 1963. Black symbolizes Kenya's African identity, red stands for the blood shed in the war for independence, and green represents the country's natural beauty. The Maasai shield and spears represent the importance of that tribe in Kenya.

The colors black, red, and green on the Kenya flag are also those of the Universal Negro Improvement Association and African Communities League (UNIA-ACL), which led many African nations to independence. The black, red, and green color scheme became a symbol of the Pan African independence movement against foreign occupation. Kenya had been a British colony from 1888, its position on the Indian Ocean was critical for the British empire's strategic objectives.

UNIA-ACL was founded by Marcus Garvey in Jamaica in 1914. It strove for self determination for African people on that continent and people of African ancestry across the world. It inspired independence and liberation movements across Africa, and Kenya was one of the countries which believed in its principles.

Throughout most of the 1950s, Kenya was the scene of the Mau Mau uprising. This long and brutal conflict was eventually quelled, but it changed the British approach to its former colonies forever. It also set in motion the processes by which Kenya eventually became independent.

The Mau Mau rebellion was mainly led by Kikuyu people. The Kikuyu are the largest ethnic group in Kenya, and one of several groupings who have striven for representation in the Kenyan government. The Maasai people are one of the few remaining nomadic tribes in the world. Kenya is proud to host this ancient nomadic culture, hence the shield and spear emblem at the center of the Kenya flag.

The Masai Mara and other parts of Kenya also support elephant, buffalo, leopard, lion, and rhinoceros populations. These are some of the most endangered species in the world, and the Kenyan government fights hard to protect them from poachers. As a developing country, Kenya needs to balance the needs of its people with its vast natural resources.

Kenya is in a pivotal position on the African continent, both physically and politically. As its flag shows, it has a history of modern independence linked deeply with African traditions.

O God of all creation
Bless this our land and nation
Justice be our shield and defender
May we dwell in unity
Peace and liberty
Plenty be found within our borders.

Let all with one accord
In common bond united
Build this our nation together
And the glory of Kenya
The fruit of our labour
Fill every heart with thanksgiving.

We offer free images of the Kenya Flag in four sizes (small, medium, large, and high resolution). These images are distributed royalty free for both personal and educational use and are ideal for use in projects and on websites. If you choose to use one of our images, attribution is appreciated, but not required.

The following html code snippets can be copied and pasted to add an image of the Kenya Flag to your website: