Our indoor flags are finished with a pole hem and your choice of with or without golden fringe. Gold fringe is the traditional way to display an indoor flag, however, some people choose without fringe for a simple and clean look that is also less expensive. If you are looking for a complete indoor presentation set, our Build Your Own Indoor International Flag Set program allows you to select a durable nylon indoor Sao Tome & Principe Flag and choose between premium quality poles, bases, and ornaments, and tassel. For indoor applications, most buyers choose a 3ft. x 5ft. flag with an 8ft. pole, however, if you have a low ceiling, you may opt for a 7ft. pole, which is designed to work with drop ceilings. If you are looking for a very substantial international flag display, our 4ft. x 6ft. indoor flags can be paired with a 9ft. pole for our largest indoor display option.

Our outdoor international flags are finished with a canvas header and brass grommets and are offered in four sizes: 2ft. x 3ft., 3ft. x 5ft., 4ft. x 6ft., and 5ft. x 8ft., to fit any sized flagpole. Typically, outdoor flags are flown outside of government organizations, businesses, and institutions on in-ground and wall-mount flagpoles, however, some people also buy these flags to display their international pride at home. If you are looking for a wall-mount Sao Tome & Principe flag set to display outside of your home, our Build Your Own Outdoor International Flag Set program will allow you to choose between premium quality 6ft. poles and brackets to display the Sao Tome & Principe Flag on your front porch. Outdoor flags can also be displayed indoors on interior walls of your home with screws anchored in the wall to attach to the grommets. 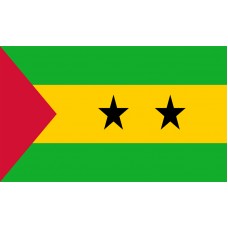 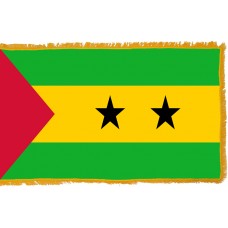 History of the Sao Tome and Principe Flag

Sao Tome and Principe is an island country located in the Gulf of Guinea in Africa. It is the second smallest country in Africa. Sao Tome is the largest as well as the capital city. Sao Tome was named after Saint Thomas by the Portuguese explorers, as they arrived on the island on Saint Feast Day, and Principe was originally name Santo Antao (Saint Anthony) but its name was changed in 1502 to "Ilha do Principe" which translates as "Prince's Island" and was named after the Prince of Portugal. The island was discovered in 1470 by two Portuguese explorers called, Joao de Santarem and Pero Escobar.

The island was uninhabited prior to its discovery. Following its discovery, the Portuguese began to use it as a base for mainland trading and eventually made settlements (mainly sugar plantations) and colonized it during the 16th century, from 1522. Many plantations had been built by the Portuguese and slaves were brought from Africa to work on the sugar plantations. From 1515, Sao Tome and Principe had become the base for slaves, which resulted in it being Africa's biggest sugar exporter. At the beginning of the 19th century, two new crops had been introduced – coffee and cocoa and by 1908, Sao Tome and Principe became the world's largest cocoa producer and exporter and still remains a major exporter today.

By 1876, slavery had been abolished in Sao Tome and Principe by the Portuguese, however, forced labor continued. Forced labor continued for a numerous amount of years, until the native Creoles, who are also known as "Forros" began revolting and rioting against this. This led to the blood bath that is known as the "Batepa Massacre," and still remains a very important event in history for the natives and is a day that is remembered and respected by the country every year. The Batepa Massacre began on February 3rd, 1953 and hundreds of African laborers were killed by the Portuguese.

Working, struggling, struggling and conquering,
We go ahead with giant steps
In the crusade of the African peoples,
Raising the national flag.
Voice of the people, present, present and united,
Strong beat in the heart of hope
To be a hero in the hour of peril,
A hero of the Nation's resurgence.

Dynamism
In the national struggle,
Eternal oath
To the sovereign country of Sao Tome and Principe.

We offer free images of the Sao Tome & Principe Flag in four sizes (small, medium, large, and high resolution). These images are distributed royalty free for both personal and educational use and are ideal for use in projects and on websites. If you choose to use one of our images, attribution is appreciated, but not required.

Add the Sao Tome & Principe Flag to your Website:

The following html code snippets can be copied and pasted to add an image of the Sao Tome & Principe Flag to your website: