We carry authentic Comoros Flags in both indoor and outdoor varieties. Our flags are proudly made in the United States from durable nylon and are printed with vibrant long-lasting inks. The Comoros national flag is often displayed at embassies, outside of businesses associated with Comoros, and at the homes of people who take great pride in their Comoros heritage.

Our indoor flags are finished with a pole hem and your choice of with or without golden fringe. Gold fringe is the traditional way to display an indoor flag, however, some people choose without fringe for a simple and clean look that is also less expensive. If you are looking for a complete indoor presentation set, our Build Your Own Indoor International Flag Set program allows you to select a durable nylon indoor Comoros Flag and choose between premium quality poles, bases, and ornaments, and tassel. For indoor applications, most buyers choose a 3ft. x 5ft. flag with an 8ft. pole, however, if you have a low ceiling, you may opt for a 7ft. pole, which is designed to work with drop ceilings. If you are looking for a very substantial international flag display, our 4ft. x 6ft. indoor flags can be paired with a 9ft. pole for our largest indoor display option.

Our outdoor international flags are finished with a canvas header and brass grommets and are offered in four sizes: 2ft. x 3ft., 3ft. x 5ft., 4ft. x 6ft., and 5ft. x 8ft., to fit any sized flagpole. Typically, outdoor flags are flown outside of government organizations, businesses, and institutions on in-ground and wall-mount flagpoles, however, some people also buy these flags to display their international pride at home. If you are looking for a wall-mount Comoros flag set to display outside of your home, our Build Your Own Outdoor International Flag Set program will allow you to choose between premium quality 6ft. poles and brackets to display the Comoros Flag on your front porch. Outdoor flags can also be displayed indoors on interior walls of your home with screws anchored in the wall to attach to the grommets.

In addition to the flags we offer for purchase, we maintain an archive of the audio and lyrics of the Comoros National Anthem, historical information about the Comoros flag, demographic data about Comoros, and free high resolution images of the Comoros flag for use in projects and on websites. 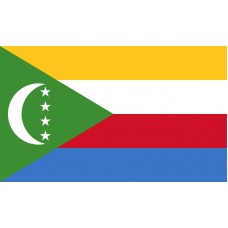 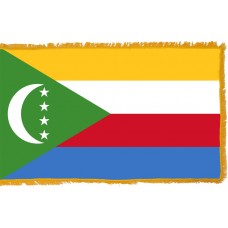 History of The Comoros Flag

The Comoros Flag features a design split into four equal-sized horizontal stripes. The top stripe is yellow, followed by white, then red, and blue is the bottom stripe. On the hoist-side side of the flag is a green triangle with a white crescent and four white 5-pointed stars running vertically between the points of the crescent. The four stripes signify the four islands that make up the country; The yellow band represents Moheli, the white band represents Mayotte, the red band represents Anjouan, and the blue band represents Grand Comore. The stars and crescent in the center of the flag are symbolic of Islam. The crescent and stars motif were first used on the Comoros Flag in 1975, during the country's independence movement. Since 1975, the flag has changed many times. The first Comoros Flag was adopted in 1963, before the country gained independence. It was then changed in 1975, when the country gained independence and was ruled by Ali Soilih. In 1978, Ahmed Abdallah became President and the flag was changes again. The current flag was designed in 2001 and adopted on January 7th, 2002.

Comoros is an island country located in East Africa, in the Indian Ocean between Mozambique and Madagascar. Neighboring countries include Tanzania and the Seychelles. Its largest city and the capital city is Moroni, which is also referred to as, "in the heart of the fire" due to the fact that the city is located at the bottom of Mount Karthala which is an active volcano, that has erupted over 20 times since the 19th century. Comoros is nicknamed, the "Perfume Islands" as many flowers and spices are grown here that are used to make perfume.

In 1841, the French established a colony in Mayotte following a treaty that the King signed, placing Comoros under French rule. In 1961, the islands gained political independence and during a treaty in 1973, it was agreed that the islands could have full independence in 1978. On July 6th, 1975, three of the islands finally managed to gain independence but the island of Mayotte voted against it and chose to remain under the French rule meaning that the Comoros government only had control over Anjouan, Grand Comore and Moheli. Since gaining independence, there have been many attempted invasions to the country.

Comoros is one of the poorest countries in the world, with an economy mainly supported by fishing, farming, and hunting with very high unemployment rates. Despite the economic struggles, Comoros is a very beautiful country and home to some stunning, historic landscapes and buildings. In the capital city, Moroni, some famous attractions include The Historic Medina and the Badjanani Mosque, which dates back to 1427. Another main attraction is "Mount Karthala" which is the tallest mountain in the country.

The Union of the Great Islands (Udzima wa ya Masiwa)

The flag is flying,
Announcing complete independence;
The nation rises up
Because of the faith we have
In this our Comoria.

On these Islands we were born,
These Islands brought us up.
May God always help us;
Let us always have the firm resolve
To love our fatherland,
Love our religion and the world.

The flag is flying.
From the Sixth of July
The Nation rises up;
Our Islands are lined up.
Maori and Anzuan, Moheli and Comore,
Let us always have devotion
To love our Great Islands.

We offer free images of the Comoros Flag in four sizes (small, medium, large, and high resolution). These images are distributed royalty free for both personal and educational use and are ideal for use in projects and on websites. If you choose to use one of our images, attribution is appreciated, but not required.

The following html code snippets can be copied and pasted to add an image of the Comoros Flag to your website: