We carry authentic Guinea Flags in both indoor and outdoor varieties. Our flags are proudly made in the United States from durable nylon and are printed with vibrant long-lasting inks. The Guinea national flag is often displayed at embassies, outside of businesses associated with Guinea, and at the homes of people who take great pride in their Guinea heritage.

Our indoor flags are finished with a pole hem and your choice of with or without golden fringe. Gold fringe is the traditional way to display an indoor flag, however, some people choose without fringe for a simple and clean look that is also less expensive. If you are looking for a complete indoor presentation set, our Build Your Own Indoor International Flag Set program allows you to select a durable nylon indoor Guinea Flag and choose between premium quality poles, bases, and ornaments, and tassel. For indoor applications, most buyers choose a 3ft. x 5ft. flag with an 8ft. pole, however, if you have a low ceiling, you may opt for a 7ft. pole, which is designed to work with drop ceilings. If you are looking for a very substantial international flag display, our 4ft. x 6ft. indoor flags can be paired with a 9ft. pole for our largest indoor display option.

Our outdoor international flags are finished with a canvas header and brass grommets and are offered in four sizes: 2ft. x 3ft., 3ft. x 5ft., 4ft. x 6ft., and 5ft. x 8ft., to fit any sized flagpole. Typically, outdoor flags are flown outside of government organizations, businesses, and institutions on in-ground and wall-mount flagpoles, however, some people also buy these flags to display their international pride at home. If you are looking for a wall-mount Guinea flag set to display outside of your home, our Build Your Own Outdoor International Flag Set program will allow you to choose between premium quality 6ft. poles and brackets to display the Guinea Flag on your front porch. Outdoor flags can also be displayed indoors on interior walls of your home with screws anchored in the wall to attach to the grommets.

In addition to the flags we offer for purchase, we maintain an archive of the audio and lyrics of the Guinea National Anthem, historical information about the Guinea flag, demographic data about Guinea, and free high resolution images of the Guinea flag for use in projects and on websites. 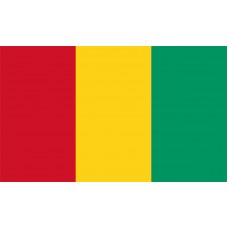 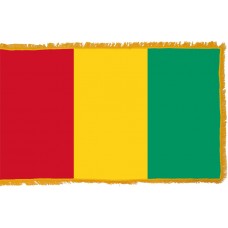 History of the Guinea Flag

The flag of Guinea like many African country flags features the colors red, green, and yellow. The colors sit as vertical bands alongside each other and are of equal width. The bands start with red on the left, which represents the struggle and blood shed for independence, then yellow in the middle, representing the sun and the riches of the land, and then on the right there is the green band representing the green of the land. There are no other markings or symbols on the flag.

Guinea was once ruled by France, hence the three vertical bands creating a tricolor as a nod to the French flag that was once flown in the country. The country's Independence was gained in 1958 which is when this flag was adopted.

The country is located on the western coast of Africa and was formerly known as French Guinea and its official title today is Republic of Guinea. Sometimes it is also referred to as Guinea-Conakry to save confusion with other countries in Africa using the name such as Equatorial Guinea (Central Africa) and it's direct neighbor to the north - Guinea-Bissau which is quite different in many ways having been occupied by the Portuguese in the past.

The country of Guinea is a predominantly rural area comprising of mountains, rivers, savannas and jungles. With major rivers such as the Niger, Gambia, and Senegal having their origins in the country along with twenty-two other rivers and the high rainfall, you can understand why the land is so green. In fact, the capital city of Conakry is said to be one of the wettest capital's in the world with around 134 days of rain each year.

Many parts of this mountainous and jungle clad country are protected, around 35% in total in order to preserve the unique flora and fauna and their natural habitats that can be found here. There are three national parks including the UNESCO World heritage site of Mount Nimba which also covers parts of Cote d'Ivoire. The highest point in Guinea is found here and reaches 1,752 meters.

Another spectacular natural site to be found in Guinea is the Kambadaga Falls, which comprises of three separate cascades and the jungle surrounding it is full of colorful birds and monkeys as well as many other important animal species.

This richness of soil, abundance of water and the favourable climatic conditions does also mean that Guinea has the potential to grow its agriculture and fishing industries once again. During the French colonization and at the start of its independence there were high levels of production of bananas, coffee, peanuts, and palm oil which gave the country wealth, but unfortunately this fell off during the socialist years and with recent political unrest. Building on this potential could bring the much-needed wealth to make improvements to health, the economy, and infrastructure of the country to fully live up to the yellow band in its Guinea Flag.

We offer free images of the Guinea Flag in four sizes (small, medium, large, and high resolution). These images are distributed royalty free for both personal and educational use and are ideal for use in projects and on websites. If you choose to use one of our images, attribution is appreciated, but not required.

The following html code snippets can be copied and pasted to add an image of the Guinea Flag to your website: