We carry authentic Hong Kong Flags in both indoor and outdoor varieties. Our flags are proudly made in the United States from durable nylon and are printed with vibrant long-lasting inks. The Hong Kong national flag is often displayed at embassies, outside of businesses associated with Hong Kong, and at the homes of people who take great pride in their Hong Kong heritage.

Our indoor flags are finished with a pole hem and your choice of with or without golden fringe. Gold fringe is the traditional way to display an indoor flag, however, some people choose without fringe for a simple and clean look that is also less expensive. If you are looking for a complete indoor presentation set, our Build Your Own Indoor International Flag Set program allows you to select a durable nylon indoor Hong Kong Flag and choose between premium quality poles, bases, and ornaments, and tassel. For indoor applications, most buyers choose a 3ft. x 5ft. flag with an 8ft. pole, however, if you have a low ceiling, you may opt for a 7ft. pole, which is designed to work with drop ceilings. If you are looking for a very substantial international flag display, our 4ft. x 6ft. indoor flags can be paired with a 9ft. pole for our largest indoor display option.

Our outdoor international flags are finished with a canvas header and brass grommets and are offered in four sizes: 2ft. x 3ft., 3ft. x 5ft., 4ft. x 6ft., and 5ft. x 8ft., to fit any sized flagpole. Typically, outdoor flags are flown outside of government organizations, businesses, and institutions on in-ground and wall-mount flagpoles, however, some people also buy these flags to display their international pride at home. If you are looking for a wall-mount Hong Kong flag set to display outside of your home, our Build Your Own Outdoor International Flag Set program will allow you to choose between premium quality 6ft. poles and brackets to display the Hong Kong Flag on your front porch. Outdoor flags can also be displayed indoors on interior walls of your home with screws anchored in the wall to attach to the grommets.

In addition to the flags we offer for purchase, we maintain an archive of historical information about the Hong Kong flag, demographic data about Hong Kong, and free high resolution images of the Hong Kong flag for use in projects and on websites. 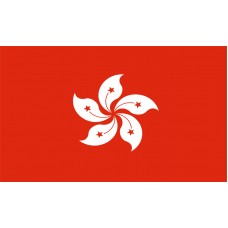 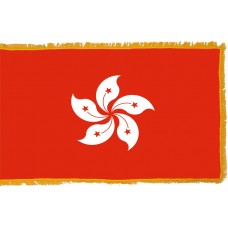 History of the Hong Kong Flag

The flag of Hong Kong was developed and approved in 1990 in preparation for when the former British Colony would become a Special Administrative Region of China in 1997. It was first officially hoisted at midnight on July 1st, 1997 when the colony was formally handed over to the Chinese. The flag is comprised of a solid red background, which was chosen to mirror the red of the People's Republic of China flag and because red is celebratory in Chinese culture. There is a white stylized Bahunia flower set in the middle. This flower is native to Hong Kong although it is normally pink in color. On each petal is a red star, again to tie in with the five stars on the flag of China. The flag was created to encompass the principal of China and Hong Kong coming together as one country but under two systems.

Hong Kong is a place that is all about contrasts and perhaps where the Chinese philosophy of Ying and Yang is most apparent. This philosophy of contrasting elements combining to make a greater whole can be found everywhere in Hong Kong.

This former small British colony located off the south-east coast of China started out as a poor rural fishing village but grew to become an internationally important trade and financial hub. This is mainly due to is location on the old trading routes and being able to combine the best of both worlds. The contrasts start with the vast skyscrapers, busy streets, large high-rise housing estates, and an extensive transport system. It is known to have the largest proportion of skyscrapers in the world with over 7000 buildings having more than 14 floors in comparison; New York only has about half that number.

With a population of around 7 million and a small land mass, the only way to house so many people is with large high-rise housing estates and modern apartment blocks. If you go out to one of the many outlying islands you will find shacks and wooden houses whose style and structure has altered little from when the area was dependent on farming and fishing.

The most efficient way of getting so many people around is a transport system that is fully integrated and includes underground trains, buses, trams, and ferries. Within this very efficient system you also find contrasts as it utilizes the ultra-modern underground system built in the 1980s with the famous star ferries and trams that have been in use since the turn of the 19th century.

In among all of this commercialization and modernity you will find very strong elements of tradition. Residents have a small shrine in their apartment to offer prayers to their Gods and place offerings on them or make use of the many temples tucked in among the skyscrapers.

Tai Chi is performed in any open space, big or small and both the Chinese and Western festivals are observed and celebrated throughout the country. As with the country itself, the flag of Hong Kong has found a way of combining old and new.

We offer free images of the Hong Kong Flag in four sizes (small, medium, large, and high resolution). These images are distributed royalty free for both personal and educational use and are ideal for use in projects and on websites. If you choose to use one of our images, attribution is appreciated, but not required.

The following html code snippets can be copied and pasted to add an image of the Hong Kong Flag to your website: