We carry authentic Kazakhstan Flags in both indoor and outdoor varieties. Our flags are proudly made in the United States from durable nylon and are printed with vibrant long-lasting inks. The Kazakhstan national flag is often displayed at embassies, outside of businesses associated with Kazakhstan, and at the homes of people who take great pride in their Kazakhstan heritage.

Our indoor flags are finished with a pole hem and your choice of with or without golden fringe. Gold fringe is the traditional way to display an indoor flag, however, some people choose without fringe for a simple and clean look that is also less expensive. If you are looking for a complete indoor presentation set, our Build Your Own Indoor International Flag Set program allows you to select a durable nylon indoor Kazakhstan Flag and choose between premium quality poles, bases, and ornaments, and tassel. For indoor applications, most buyers choose a 3ft. x 5ft. flag with an 8ft. pole, however, if you have a low ceiling, you may opt for a 7ft. pole, which is designed to work with drop ceilings. If you are looking for a very substantial international flag display, our 4ft. x 6ft. indoor flags can be paired with a 9ft. pole for our largest indoor display option.

Our outdoor international flags are finished with a canvas header and brass grommets and are offered in four sizes: 2ft. x 3ft., 3ft. x 5ft., 4ft. x 6ft., and 5ft. x 8ft., to fit any sized flagpole. Typically, outdoor flags are flown outside of government organizations, businesses, and institutions on in-ground and wall-mount flagpoles, however, some people also buy these flags to display their international pride at home. If you are looking for a wall-mount Kazakhstan flag set to display outside of your home, our Build Your Own Outdoor International Flag Set program will allow you to choose between premium quality 6ft. poles and brackets to display the Kazakhstan Flag on your front porch. Outdoor flags can also be displayed indoors on interior walls of your home with screws anchored in the wall to attach to the grommets. 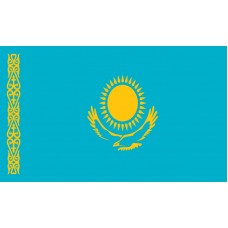 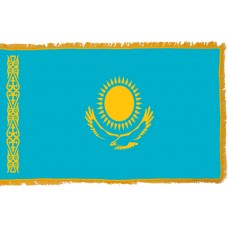 History of the Kazakhstan Flag

The Kazakhstan flag is comprised of a sky blue rectangle with golden features in its center and to the hoist side. The blue color symbolizes the vast sky which covers the country. The main feature of the central image is a golden sun with a flying eagle flying below it. Around the disc are 32 outward pointing arrows representing the sun's live giving powers. The hoist side has a representation of Kazakhstan's traditional national emblem, the Horns of the Ram.

The eagle featured on the Kazakhstan flag is a depiction of the Steppe Eagle. This is a species of the eagle family which thrives throughout central Asia, and is particularly revered in Kazakhstan. The country is part of the vast Steppe region, which is similar to the prairie ranges of North America.

Kazakh people identify with the Steppe Eagle as they feel it symbolizes their connection with their part of the world. The Kazakh identity is of Turkic origin, and Kazakhstan has a strong Turkic identity. The Turkic people settled in large parts of central Asia throughout the middle ages, and Kazakhstan is the largest modern nation populated by Turkic people.

The design at the hoist side of the Kazakhstan flag is a traditional Turkic design. It is known as "koshkar-muiz," which means horns of the ram. This is a reference to the central Asian practice of herding sheep and goats as a means of subsistence whatever the season of the year. Kazakhstan today is part of what used to be the Mongol Empire, established by Genghis Khan.

This, and many other cultures relied on sheep to sustain their societies as they moved across the region. Symbology from this and other central Asian cultures has passed down to Kazakhstan and other modern nations in the region. The "Horns of the Ram" design is widespread throughout cultures in the Steppe region, and Kazakhstan has incorporated it in its national flag.

Kazakhstan is an enormous country with huge natural resources. It sits on natural oil and gas reserves which are the envy of neighboring states, including Russia, China, and Iran. The Kazakh nation was formed before it was enveloped into the Soviet Union in the 20th Century, but was long the envy of other empires.

The national flag uses the Steppe Eagle to symbolize a hopeful future free from foreign interference. It also connects the country to its ancestral past, and is bathed in the endless blue of the Kazakh sky. This central Asian country on the edge of Europe is well aware of its past and hopeful for its future.

Sky of golden sun,
Steppe of golden seed,
Legend of courage -
Take a look at my country!

From the antiquity
Our heroic glory emerged,
They did not give up their pride
My Kazakh people are strong!

My country, my country,
As your flower I will be planted,
As your song I will stream, my country!
My native land -- My Kazakhstan!

The way was opened to the posterity
I have a vast land.
Its unity is proper,
I have an independent country.

It welcomed the time
Like an eternal friend,
Our country is happy,
Such is our country.

We offer free images of the Kazakhstan Flag in four sizes (small, medium, large, and high resolution). These images are distributed royalty free for both personal and educational use and are ideal for use in projects and on websites. If you choose to use one of our images, attribution is appreciated, but not required.

The following html code snippets can be copied and pasted to add an image of the Kazakhstan Flag to your website: