We carry authentic Lesotho Flags in both indoor and outdoor varieties. Our flags are proudly made in the United States from durable nylon and are printed with vibrant long-lasting inks. The Lesotho national flag is often displayed at embassies, outside of businesses associated with Lesotho, and at the homes of people who take great pride in their Lesotho heritage.

Our indoor flags are finished with a pole hem and your choice of with or without golden fringe. Gold fringe is the traditional way to display an indoor flag, however, some people choose without fringe for a simple and clean look that is also less expensive. If you are looking for a complete indoor presentation set, our Build Your Own Indoor International Flag Set program allows you to select a durable nylon indoor Lesotho Flag and choose between premium quality poles, bases, and ornaments, and tassel. For indoor applications, most buyers choose a 3ft. x 5ft. flag with an 8ft. pole, however, if you have a low ceiling, you may opt for a 7ft. pole, which is designed to work with drop ceilings. If you are looking for a very substantial international flag display, our 4ft. x 6ft. indoor flags can be paired with a 9ft. pole for our largest indoor display option.

Our outdoor international flags are finished with a canvas header and brass grommets and are offered in four sizes: 2ft. x 3ft., 3ft. x 5ft., 4ft. x 6ft., and 5ft. x 8ft., to fit any sized flagpole. Typically, outdoor flags are flown outside of government organizations, businesses, and institutions on in-ground and wall-mount flagpoles, however, some people also buy these flags to display their international pride at home. If you are looking for a wall-mount Lesotho flag set to display outside of your home, our Build Your Own Outdoor International Flag Set program will allow you to choose between premium quality 6ft. poles and brackets to display the Lesotho Flag on your front porch. Outdoor flags can also be displayed indoors on interior walls of your home with screws anchored in the wall to attach to the grommets.

In addition to the flags we offer for purchase, we maintain an archive of historical information about the Lesotho flag, demographic data about Lesotho, and free high resolution images of the Lesotho flag for use in projects and on websites. 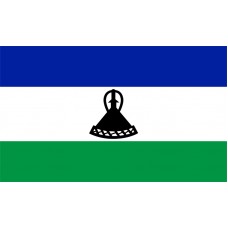 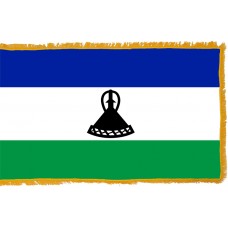 History of the Lesotho Flag

The Lesotho flag consists of three horizontal bands in the colors in blue, white, and green. In the center of the white band, there is a black "Mokorotlo" which is a Basotho hat. Basotho refers to the people of Lesotho. The blue color is symbolic of the sky and the rain, the white color is symbolic of peace, and the green color is symbolic of hope and prosperity. The black color of the hat (changed from brown) is used to represent a black nation and Africa's heritage.

The Mokorotlo is a traditional straw hat that represents the Basotho people. The Lesotho flag used today, was adopted on October 4th, 2006. The first Lesotho flag following their independence from the UK was adopted on October 4th, 1966, meaning that the one used today was adopted exactly 40 years after the first one, to honour the 40 year anniversary of their independence and represent a peaceful country. When the flag for 2006 was introduced, it was chosen from 4 design submissions, all of which included a Basotho hat.

Lesotho officially became a country in 1818, when Moshoeshoe brought groups of people to the area, formed the country and declared himself as King. In 1868, when the country was invaded and under attack, Moshoeshoe sought help from the English Queen Victoria who agreed to help on the condition that Lesotho became part of the British Empire. From 1868 – 1966, Lesotho was a British Protectorate and since gaining independence, it still remains part of the British commonwealth.

Lesotho is a small landlocked country in South Africa that is surrounded by South Africa only and does not have borders with any other country. These countries are referred to as "enclave" countries. As well as Lesotho, there are 2 other enclave countries, which are, the Vatican City and San Marino, which are both surrounded by Italy. Lesotho (formerly known as Basutoland) translates as "the land of people who speak Sesotho." The country is also known as "The Kingdom in the Sky" as it is the only country in the world that is 1,000m above sea level and even its "low point" is the highest in the world. The majority of the country (80%) is made up of mountains. The highest point and highest mountain in Lesotho is "Thabana Ntlenyana" which translates as "beautiful little mountain." The capital city of Lesotho is called "Maseru."

The country's economy is mainly reliant on agriculture, livestock, and mining. Despite being a beautiful country, there is not much tourism and if tourists do visit, it is mainly due to them doing a tour of South Africa, so they generally just tend to spend a couple of days there. Lesotho is home to some beautiful sights, which include "Maletsunyane Falls" or the "Semonkong Falls" which is the highest single drop waterfall in Africa, and "Afriski" which is the highest ski resort in Africa.

We offer free images of the Lesotho Flag in four sizes (small, medium, large, and high resolution). These images are distributed royalty free for both personal and educational use and are ideal for use in projects and on websites. If you choose to use one of our images, attribution is appreciated, but not required.

The following html code snippets can be copied and pasted to add an image of the Lesotho Flag to your website: