We carry authentic Russia Flags in both indoor and outdoor varieties. Our flags are proudly made in the United States from durable nylon and are printed with vibrant long-lasting inks. The Russia national flag is often displayed at embassies, outside of businesses associated with Russia, and at the homes of people who take great pride in their Russian heritage.

Our indoor flags are finished with a pole hem and your choice of with or without golden fringe. Gold fringe is the traditional way to display an indoor flag, however, some people choose without fringe for a simple and clean look that is also less expensive. If you are looking for a complete indoor presentation set, our Build Your Own Indoor International Flag Set program allows you to select a durable nylon indoor Russia Flag and choose between premium quality poles, bases, and ornaments, and tassel. For indoor applications, most buyers choose a 3ft. x 5ft. flag with an 8ft. pole, however, if you have a low ceiling, you may opt for a 7ft. pole, which is designed to work with drop ceilings. If you are looking for a very substantial international flag display, our 4ft. x 6ft. indoor flags can be paired with a 9ft. pole for our largest indoor display option.

Our outdoor international flags are finished with a canvas header and brass grommets and are offered in four sizes: 2ft. x 3ft., 3ft. x 5ft., 4ft. x 6ft., and 5ft. x 8ft., to fit any sized flagpole. Typically, outdoor flags are flown outside of government organizations, businesses, and institutions on in-ground and wall-mount flagpoles, however, some people also buy these flags to display their international pride at home. If you are looking for a wall-mount Russia flag set to display outside of your home, our Build Your Own Outdoor International Flag Set program will allow you to choose between premium quality 6ft. poles and brackets to display the Russia Flag on your front porch. Outdoor flags can also be displayed indoors on interior walls of your home with screws anchored in the wall to attach to the grommets.

In addition to the flags we offer for purchase, we maintain an archive of the audio and lyrics of the Russia National Anthem, historical information about the Russia flag, demographic data about Russia, and free high resolution images of the Russia flag for use in projects and on websites. 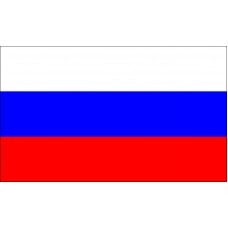 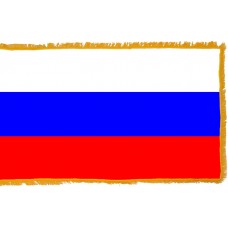 History of the Russian Flag

The Russia Flag consists of three horizontal bands, in the colors of white, blue, and red. The flag first became official as a flag of "Tsardom of Russia" on May 11th, 1696. This flag was used until the Russian Socialist Federative Soviet Republic (or Russian Federation) was established in 1917, following the Russian revolution. During the Soviet Union existence, the national flag consisted of a plain red field with a gold hammer, sickle and star on it.

Following the collapse of the Soviet Union, the Russia Flag was re-adopted and still used today since 1991. There are different interpretations of the meaning of the colors that are used on the flag. It is thought that the white color represents nobility and frankness but also represents peace. The blue color, some think, represents faithfulness and honesty, whilst others think it represents democracy and the ocean. The red color represents courage, generosity, and love but it is also thought to represent blood and the communist history.

Russia is a country in Eurasia that shares borders with Norway, Finland, Estonia, Latvia, Lithuania, Poland, Belarus, Ukraine, Georgia, Azerbaijan, Kazakhstan, China, Mongolia, and North Korea. Russia is the largest country in the world and it spans eleven time zones. Its capital city and largest city in the world is called Moscow. Russia is a country that has endured hundreds of wars and battles and been ruled by different empires, Tsars and dictators.

During the 18th Century, the Russian Empire was one of the largest empires in history and was ruled by an emperor that was known as the Tsar. In October, 1917, "The Bolsheviks" (communists) murdered the Tsar and took over the country and created Marxist communism. In 1922-1953, Russia was ruled by the dictator Josef Stalin who destroyed the country and the people of the country. His cruelty led to the starvation and death of many Russians and he was also responsible for "removing" the military people that would not be loyal to him, and the majority would be sent to prison camps.

Stalin ruled Russia until his death in 1953. During Stalin's rule, in 1941, Nazi Germany invaded, even though it had been agreed between Russia and Nazi Germany in 1939 that they would not attack. During this invasion and war (WWII), Russia lost approximately 27 million Russians, but despite this, they remained the winners of the war.

State Anthem of the Russian Federation

Russia -- our holy nation,
Russia -- our beloved country.
A mighty will, great glory --
These are yours for all time!

From the southern seas to the polar lands
Spread our forests and fields.
You are unique in the world, one of a kind --
Native land protected by God!

Wide spaces for dreams and for living
Are opened for us by the coming years
Our loyalty to our Fatherland gives us strength.
Thus it was, thus it is and always will be!

We offer free images of the Russia Flag in four sizes (small, medium, large, and high resolution). These images are distributed royalty free for both personal and educational use and are ideal for use in projects and on websites. If you choose to use one of our images, attribution is appreciated, but not required.

The following html code snippets can be copied and pasted to add an image of the Russia Flag to your website: