We carry authentic South Africa Flags in both indoor and outdoor varieties. Our flags are proudly made in the United States from durable nylon and are printed with vibrant long-lasting inks. The South Africa national flag is often displayed at embassies, outside of businesses associated with South Africa, and at the homes of people who take great pride in their South African heritage.

Our indoor flags are finished with a pole hem and your choice of with or without golden fringe. Gold fringe is the traditional way to display an indoor flag, however, some people choose without fringe for a simple and clean look that is also less expensive. If you are looking for a complete indoor presentation set, our Build Your Own Indoor International Flag Set program allows you to select a durable nylon indoor South Africa Flag and choose between premium quality poles, bases, and ornaments, and tassel. For indoor applications, most buyers choose a 3ft. x 5ft. flag with an 8ft. pole, however, if you have a low ceiling, you may opt for a 7ft. pole, which is designed to work with drop ceilings. If you are looking for a very substantial international flag display, our 4ft. x 6ft. indoor flags can be paired with a 9ft. pole for our largest indoor display option.

Our outdoor international flags are finished with a canvas header and brass grommets and are offered in four sizes: 2ft. x 3ft., 3ft. x 5ft., 4ft. x 6ft., and 5ft. x 8ft., to fit any sized flagpole. Typically, outdoor flags are flown outside of government organizations, businesses, and institutions on in-ground and wall-mount flagpoles, however, some people also buy these flags to display their international pride at home. If you are looking for a wall-mount South Africa flag set to display outside of your home, our Build Your Own Outdoor International Flag Set program will allow you to choose between premium quality 6ft. poles and brackets to display the South Africa Flag on your front porch. Outdoor flags can also be displayed indoors on interior walls of your home with screws anchored in the wall to attach to the grommets. 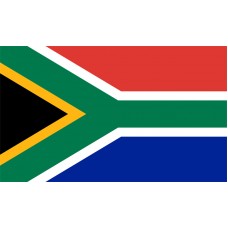 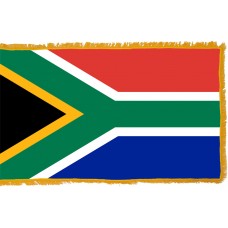 History of the South African Flag

The flag, as a whole, was designed to represent unity. The South Africa flag was adopted on April 27th, 1994 and was designed by Frederick Brownell, following a public competition that was held to design the flag in 1993. At the time it was introduced, it was the only flag in the world to have six colors.

South Africa is the most Southern country in Africa and shares borders with Botswana, Mozambique, Namibia, Swaziland, and Zimbabwe. The country has three capital cities, which are Cape Town (which is considered to be one of the most beautiful cities in the world), Bloemfontein, and Pretoria. The largest city in the country is Johannesburg. South Africa is also referred to as "Rainbow Nation" due to the many different groups of people and languages that it has. South Africa has over 11 official languages.

South Africa was founded in 1652 by the Dutch East India Company's Jan Van Riebeeck. In 1806, it became a part of the British Empire, following the Napoleonic war.

In 1867 diamonds were found in South Africa and in 1884, gold was discovered. From this period South Africa had a major increase in its economic growth. In 1948, "Apartheid" was introduced which was a law that separated the different racial groups (the whites from the blacks), for example, the white people were not allowed to marry the black people and certain jobs were only offered to white people. This law remained until 1994, even though South Africa gained independence during this period, on May 31st, 1961 and had become a sovereign state. In 1994, Apartheid had come to an end and, Nelson Mandela (who was in prison for 27 years due to his resistance to Apartheid and the battle he fought) had been elected as the president of South Africa. He became the first black president as well as winning a Nobel Peace Prize in the same year.

Ringing out from our blue heavens,
From our deep seas breaking round,
Over everlasting mountains,
Where the echoing crags resound

Sounds the call to come together,
And united we shall stand,
Let us live and strive for freedom,
In South Africa our land.

We offer free images of the South Africa Flag in four sizes (small, medium, large, and high resolution). These images are distributed royalty free for both personal and educational use and are ideal for use in projects and on websites. If you choose to use one of our images, attribution is appreciated, but not required.

The following html code snippets can be copied and pasted to add an image of the South Africa Flag to your website: