We carry authentic Denmark Flags in both indoor and outdoor varieties. Our flags are proudly made in the United States from durable nylon and are printed with vibrant long-lasting inks. The Denmark national flag is often displayed at embassies, outside of businesses associated with Denmark, and at the homes of people who take great pride in their Danish heritage.

Our indoor flags are finished with a pole hem and your choice of with or without golden fringe. Gold fringe is the traditional way to display an indoor flag, however, some people choose without fringe for a simple and clean look that is also less expensive. If you are looking for a complete indoor presentation set, our Build Your Own Indoor International Flag Set program allows you to select a durable nylon indoor Denmark Flag and choose between premium quality poles, bases, and ornaments, and tassel. For indoor applications, most buyers choose a 3ft. x 5ft. flag with an 8ft. pole, however, if you have a low ceiling, you may opt for a 7ft. pole, which is designed to work with drop ceilings. If you are looking for a very substantial international flag display, our 4ft. x 6ft. indoor flags can be paired with a 9ft. pole for our largest indoor display option.

Our outdoor international flags are finished with a canvas header and brass grommets and are offered in four sizes: 2ft. x 3ft., 3ft. x 5ft., 4ft. x 6ft., and 5ft. x 8ft., to fit any sized flagpole. Typically, outdoor flags are flown outside of government organizations, businesses, and institutions on in-ground and wall-mount flagpoles, however, some people also buy these flags to display their international pride at home. If you are looking for a wall-mount Denmark flag set to display outside of your home, our Build Your Own Outdoor International Flag Set program will allow you to choose between premium quality 6ft. poles and brackets to display the Denmark Flag on your front porch. Outdoor flags can also be displayed indoors on interior walls of your home with screws anchored in the wall to attach to the grommets.

In addition to the flags we offer for purchase, we maintain an archive of the audio and lyrics of the Denmark National Anthem, historical information about the Denmark flag, demographic data about Denmark, and free high resolution images of the Denmark flag for use in projects and on websites. 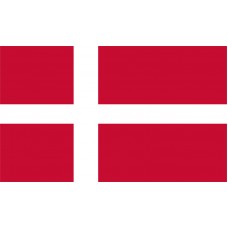 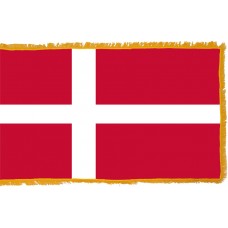 History of the Denmark Flag

The Denmark Flag is the oldest flag in the world that is still used today. It was adopted on June 15th, 1219 and features a red field with a large white cross that meets all the edges of the flag. The vertical line of the cross is positioned slightly to the left of center. The red color on the flag represents the battles fought and the lives lost, while the white cross represents Christianity which was the purpose of the battle.

The cross on this flag has also been adopted by other Nordic countries including Norway, Sweden, Finland, and Iceland. The people of denmark take great pride in the fact theat their flag is the oldest in the world.

In fact, according to Danish legend, during the battle of Valdemar with Estonia, Denmark was losing badly and just as they were about to surrender and began to pray, the flag fell from the sky. It is thought that this flag gave the men the hope and inspiration that they needed to continue in the battle and to ultimately become victorious in the battle.

The Denmark Flag is often referred to as the "Dannebrog" or "Danish Cloth" and every year on June 15th, the flag is raised in tribute to all the soldiers who lost their lives during the battle of Valdemar.

Denmark is a Scandinavian nation located in Northern Europe and is the smallest of the Scandinavian countries, sharing its borders with Norway, Germany, and Sweden. There is a bridge that connects Denmark to Sweden. Denmark has over 443 islands, 70 of which are inhabited. The three largest islands are, Zealand, Funen, and the North Jutlandic Island.

The largest city and capital of Denmark is Copenhagen, which is located on the island of Zealand. Copenhagen is the most visited city in Europe, attracting thousands of tourists each year. The two main attractions that one can visit in Copenhagen are the Tivoli Gardens and the Stroget. The Tivoli Gardens opened in 1843 and are home to the second oldest amusement park. As well as the amusement park, there are many historical buildings and gardens which are popular attractions for visitors.

Stroget is the longest shopping street in Europe and is located in the old city of Copenhagen. Another very famous attraction is a bronze sculpture named, "The Little Mermaid." The statues, which is located at Langelinje Pier and was 100 years old in 2013 was inspired by Hans Christian Andersen's story about a mermaid who swims to the surface every morning and evening to sit on her rock.

There is a Lovely Country (Der er et yndigt land)

There is a lovely country
it stands with broad beeches
near the salty eastern beach
It winds itself in hill, valley,
it is called old Denmark
and it is Freja's hall

There sat in former times,
the armour-suited warriors,
rested from conflict
Then they journeyed forwards to their enemies' injury,
now their bones are resting
behind the mound's menhir

That country is still lovely,
because the sea waves so blue frolic,
and the foliage stands so green
And noble women, beautiful maidens,
and men and brisk swains
inhabit the Danes' islands

Hail king and native country!
Hail every a Dane-citizen,
who works, what he can
Our old Denmark shall endure,
as long as the beech reflects
its top in the blue wave

We offer free images of the Denmark Flag in four sizes (small, medium, large, and high resolution). These images are distributed royalty free for both personal and educational use and are ideal for use in projects and on websites. If you choose to use one of our images, attribution is appreciated, but not required.

The following html code snippets can be copied and pasted to add an image of the Denmark Flag to your website: