We carry authentic Armenia Flags in both indoor and outdoor varieties. Our flags are proudly made in the United States from durable nylon and are printed with vibrant long-lasting inks. The Armenia national flag is often displayed at embassies, outside of businesses associated with Armenia, and at the homes of people who take great pride in their Armenia heritage.

Our indoor flags are finished with a pole hem and your choice of with or without golden fringe. Gold fringe is the traditional way to display an indoor flag, however, some people choose without fringe for a simple and clean look that is also less expensive. If you are looking for a complete indoor presentation set, our Build Your Own Indoor International Flag Set program allows you to select a durable nylon indoor Armenia Flag and choose between premium quality poles, bases, and ornaments, and tassel. For indoor applications, most buyers choose a 3ft. x 5ft. flag with an 8ft. pole, however, if you have a low ceiling, you may opt for a 7ft. pole, which is designed to work with drop ceilings. If you are looking for a very substantial international flag display, our 4ft. x 6ft. indoor flags can be paired with a 9ft. pole for our largest indoor display option.

Our outdoor international flags are finished with a canvas header and brass grommets and are offered in four sizes: 2ft. x 3ft., 3ft. x 5ft., 4ft. x 6ft., and 5ft. x 8ft., to fit any sized flagpole. Typically, outdoor flags are flown outside of government organizations, businesses, and institutions on in-ground and wall-mount flagpoles, however, some people also buy these flags to display their international pride at home. If you are looking for a wall-mount Armenia flag set to display outside of your home, our Build Your Own Outdoor International Flag Set program will allow you to choose between premium quality 6ft. poles and brackets to display the Armenia Flag on your front porch. Outdoor flags can also be displayed indoors on interior walls of your home with screws anchored in the wall to attach to the grommets.

In addition to the flags we offer for purchase, we maintain an archive of the audio and lyrics of the Armenia National Anthem, historical information about the Armenia flag, demographic data about Armenia, and free high resolution images of the Armenia flag for use in projects and on websites. 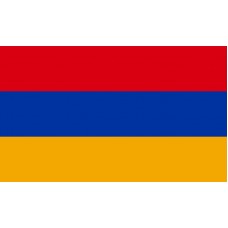 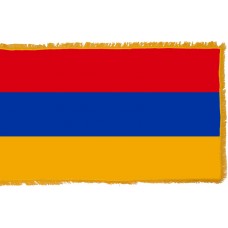 History of the Armenian flag

The Armenian flag features a design of three equal-sized horizontal stripes of red, blue and orange. There are several interpretations of the meanings of the colors chosen on the flag. The most popular interpretation is that the red color represents the blood of the 1,500,000 people that lost their lives the Armenian Genocide, the blue symbolizes a pure sky, and the orange color signifies the courage of the people and Armenia. An alternative explanation is that the three colors represent a rainbow over Mount Ararat, which is a national symbol that is revered as sacred by Armenians. The constitution of the Republic of Armenia, has another explanation which indicates that the red color stands for the Armenian Highland, the continued struggle for survival, freedom, independence, and the Christian faith, the blue color represents the desire of Armenians to live beneath peaceful blue skies, and the orange signifies the creativity, hard work, and determination of Armenians.

The current flag design was first used between 1918-1921 and was readopted on August 24th, 1990. Throughout the nation's history, many different variations of this flag design have been used, which have changed in conjunction with leadership changes. Historically, wooden carvings of animals were mounted on poles and used as a symbol of the country in the same way that flags are used today.

On May 28, 1918, Armenia became independent and several months later, on August 1st, 1918, the national flag was adopted. The flag remained in use until April 2nd, 1921. In 1920, two years after becoming independent, Armenia was invaded and became a part of the Soviet Union and was a republic of the Soviet Union until 1991. The first Armenian SSR (Soviet Socialist Republic) flag was implemented in 1936 and held a strong resemblance to the Soviet flag. It changed again in 1940, followed by another change in 1952. When the Soviet Union collapsed in 1991, Armenia, once again, became independent and re-adopted their national flag. The Armenian flag represents the country's history as well as hope for the future.

The Armenian Genocide, also known as the "Armenian Holocaust," and the "Armenian Massacre," refers to two independent events. In 1915, 300 Armenian leaders and intellectuals as well as 5,000 Armenian civilians (Mostly the poor) were killed by officers who sought to completely remove the Armenians from Turkey so it would become a fully Islamic and Turkish country. The second event was during World War I, when the Young Turks who ruled Turkey ordered the deportation of 1,750,000 Armenians. During this process, hundreds of people died either from starvation or disease and 6000,000 or more were killed by the military.

Many different countries have conquered, ruled, and exploited Armenia throughout its history, which makes the Armenian flag a powerful and significant symbol of their independence to the people of Armenia.

Armenia is a landlocked country that shares borders with Turkey, Iran, Georgia and Azerbaijan. Its capital city is Yerevan, which is 2700 years old and is one of the oldest still occupied cities in the world. It is home to many ancient buildings and museums, describing the countries rich history.

Is now summoning its sons
To the free, independent Armenia.

Here is a flag for you my brother,
That I have sewed
Over the sleepless nights,
And bathed in my tears.

Over the sleepless nights,
And bathed in my tears.

Look at it, tricoloured,
A valuable symbol for us.
Let it shine against the enemy.
Let Armenia be glorious forever.

Let it shine against the enemy.
Let Armenia be glorious forever.

Death is the same everywhere,
A man dies but once,
Blessed is the one that dies
For the freedom of his nation.

Blessed is the one that dies
For the freedom of his nation.

Is now summoning its sons
To the free, independent Armenia.

We offer free images of the Armenia Flag in four sizes (small, medium, large, and high resolution). These images are distributed royalty free for both personal and educational use and are ideal for use in projects and on websites. If you choose to use one of our images, attribution is appreciated, but not required.

The following html code snippets can be copied and pasted to add an image of the Armenia Flag to your website: