We carry authentic Grenada Flags in both indoor and outdoor varieties. Our flags are proudly made in the United States from durable nylon and are printed with vibrant long-lasting inks. The Grenada national flag is often displayed at embassies, outside of businesses associated with Grenada, and at the homes of people who take great pride in their Grenada heritage.

Our indoor flags are finished with a pole hem and your choice of with or without golden fringe. Gold fringe is the traditional way to display an indoor flag, however, some people choose without fringe for a simple and clean look that is also less expensive. If you are looking for a complete indoor presentation set, our Build Your Own Indoor International Flag Set program allows you to select a durable nylon indoor Grenada Flag and choose between premium quality poles, bases, and ornaments, and tassel. For indoor applications, most buyers choose a 3ft. x 5ft. flag with an 8ft. pole, however, if you have a low ceiling, you may opt for a 7ft. pole, which is designed to work with drop ceilings. If you are looking for a very substantial international flag display, our 4ft. x 6ft. indoor flags can be paired with a 9ft. pole for our largest indoor display option.

Our outdoor international flags are finished with a canvas header and brass grommets and are offered in four sizes: 2ft. x 3ft., 3ft. x 5ft., 4ft. x 6ft., and 5ft. x 8ft., to fit any sized flagpole. Typically, outdoor flags are flown outside of government organizations, businesses, and institutions on in-ground and wall-mount flagpoles, however, some people also buy these flags to display their international pride at home. If you are looking for a wall-mount Grenada flag set to display outside of your home, our Build Your Own Outdoor International Flag Set program will allow you to choose between premium quality 6ft. poles and brackets to display the Grenada Flag on your front porch. Outdoor flags can also be displayed indoors on interior walls of your home with screws anchored in the wall to attach to the grommets.

In addition to the flags we offer for purchase, we maintain an archive of historical information about the Grenada flag, demographic data about Grenada, and free high resolution images of the Grenada flag for use in projects and on websites. 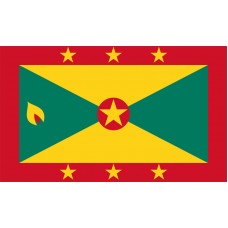 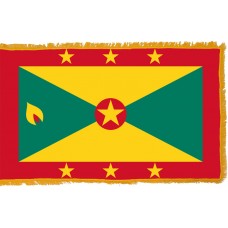 History of the Grenada Flag

The Flag of Grenada was adopted after it gained independence from the United Kingdom in 1974. It consists of three colors - green, red and gold. These colors are used to represent the country's vegetation and agriculture (green), courage and vitality (red), and wisdom and warmth (gold).

Two gold triangles, one top and bottom and two green triangles, one left and one right form a rectangle which is the main background of the flag. Within the green triangle on the left is a yellow and red symbol which represents a nutmeg which grows all over the island along with many other spices, hence a link to the name is given to this former colony of "Isle of Spice", spices being one of its main exports. Mr Anthony C. George who comes from the town of Soubise in the Parish of St Andrew's designed the flag.

It is believed the name Grenada originates from the time that the French colonized the country and called it La Grenade. They had control of Grenada for about one hundred years and prospered from it by exporting sugar. Control was then passed to the British for the next two centuries and they continued to build the country's prosperity by adding the export of spices.

Today the Grenadian economy is mainly dependent on tourism. Like many Caribbean islands it has beautiful beaches and picturesque bays and harbors for visitors to enjoy. It's lush green interior features a number of waterfalls and probably most famously a crater-formed lake called Grand Etang Lake which tourists can see when visiting the Grand Etang National Park.

If you are visiting Grenada you must experience what the island is renowned for, it's spices, in particular, nutmeg. A visit to the Dougaldston Spice Estate which is one of the largest and oldest plantations on the island is where the locals will demonstrate how nutmeg has been grown and processed for centuries to make Grenada one of the top producers in the world of this spice.

Being located in the south east of the Caribbean, Grenada's hurricanes generally do not cause severe damage, but the country did receive a direct hit from Hurricane Ivan in September 2004 having been free of hurricanes for the previous 49 years. The damage caused was horrific with about 90 percent of homes damaged or destroyed. Due to the determination of the citizens, international finance and action from the Grenadian government the island recovered well and was ready for business again in just over a year proving the worth of the red on the Grenada flag representing the courage, fervour and vitality of the people to preserve and maintain this small island nation.

We offer free images of the Grenada Flag in four sizes (small, medium, large, and high resolution). These images are distributed royalty free for both personal and educational use and are ideal for use in projects and on websites. If you choose to use one of our images, attribution is appreciated, but not required.

The following html code snippets can be copied and pasted to add an image of the Grenada Flag to your website: