We carry authentic Guatemala Flags in both indoor and outdoor varieties. Our flags are proudly made in the United States from durable nylon and are printed with vibrant long-lasting inks. The Guatemala national flag is often displayed at embassies, outside of businesses associated with Guatemala, and at the homes of people who take great pride in their Guatemala heritage.

Our indoor flags are finished with a pole hem and your choice of with or without golden fringe. Gold fringe is the traditional way to display an indoor flag, however, some people choose without fringe for a simple and clean look that is also less expensive. If you are looking for a complete indoor presentation set, our Build Your Own Indoor International Flag Set program allows you to select a durable nylon indoor Guatemala Flag and choose between premium quality poles, bases, and ornaments, and tassel. For indoor applications, most buyers choose a 3ft. x 5ft. flag with an 8ft. pole, however, if you have a low ceiling, you may opt for a 7ft. pole, which is designed to work with drop ceilings. If you are looking for a very substantial international flag display, our 4ft. x 6ft. indoor flags can be paired with a 9ft. pole for our largest indoor display option.

Our outdoor international flags are finished with a canvas header and brass grommets and are offered in four sizes: 2ft. x 3ft., 3ft. x 5ft., 4ft. x 6ft., and 5ft. x 8ft., to fit any sized flagpole. Typically, outdoor flags are flown outside of government organizations, businesses, and institutions on in-ground and wall-mount flagpoles, however, some people also buy these flags to display their international pride at home. If you are looking for a wall-mount Guatemala flag set to display outside of your home, our Build Your Own Outdoor International Flag Set program will allow you to choose between premium quality 6ft. poles and brackets to display the Guatemala Flag on your front porch. Outdoor flags can also be displayed indoors on interior walls of your home with screws anchored in the wall to attach to the grommets. 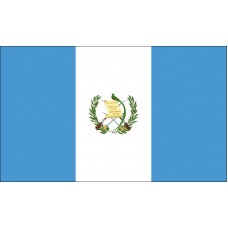 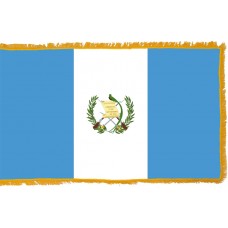 History of the Guatemala Flag

The Flag of Guatemala is also referred to as the "Azuliblanco" or "Pabellon Nacional." The former name in Spanish referring to the two colors on the flag of blue and white. The flag has a white vertical band between two blue vertical bands signifying the geographical position of Guatemala between two seas - the Pacific and the Atlantic and the blue sky above. The white band stands for peace and purity.On the white band, in the center is the national coat of arms which dates back to 1871. This coat of arms consists of the national bird the Quetzal, in green which is holding a white scroll with an inscription of "Libertad de 15 de Septiembre 1821" which is when Guatemala left Spanish rule. On this emblem you will also find a green wreath of laurels, the symbol for victory, two crossed rifles to show the country will defend itself by force, and two crossed swords for honor. Many of the elements of the flag are referenced in the national anthem of the country.

This Central American country has a rich array of geographical and historical sites to be seen including volcanoes, rain forests, Mayan ruins and Spanish colonial buildings. Guatemala was at the center of the ancient Mayan civilization and so many elements of this are still very much apparent to this day. Some of the most extensive Mayan ruins can be found at Tikal, a UNESCO World Heritage site where about 3,000 ruins dating from 600 BC to AD 900 can be found; also, the Museum of Archaeology and Ethnology in Guatemala City holds one of the largest collections of Mayan artefacts.

It is not just the ancient Mayan sites and artefacts that remind us of the incredible history of this country, it is in everyday things like the food which is still very much based on that of the Mayans of corn, beans and chilies. A good percentage of the population is of the indigenous Maya people and over 20 Mayan languages are still spoken in the country even though Spanish is the official language, meaning many inhabitants are bi-lingual.

The Spanish colonization left its mark also as seen in the architecture, the religion of Catholicism, the language, and names of people and places; but these are often combined with Mayan traditions and practices. You will notice the contrast between these two different cultures when travelling around the country.

Those who are of the indigenous Maya people tend to be poorer and live in the rural highland areas, whereas the relatively wealthy European influenced population are found in the urban areas and are known as Ladinos, but this hasn't meant the erosion of the Mayan heritage, it still stays strong. In fact, on gaining their independence from Spain the Guatemalan people chose to go back to their Mayan roots having the Queztal, (the national bird) on the Guatemala flag and even naming their currency the Guatemalan Queztal in line with the fact that the Mayan's used to use the tail feathers of this bird as currency.

Fortune Guatemala, may your altar
Never be trampled by the tormentor
Nor should slaves lick the yoke
Nor should tyrants spit in your face

If tomorrow your sacred soil
Is threatened by foreign invasion
Free into the wind, your beautiful flag
To victory or death it will call

Free into the wind, your beautiful flag
To victory or death it will call
Since your people, with fiery soul
Will be dead before enslaved.

From your old and hard chains
You forged, with an ire-driven hand,
The plow that fertilizes the soil
And the sword that saves honor.

Our fathers fought one day,
Lit up in patriotic burning
And they were able, without bloody clash,
To place you on a throne of love.

And they were able, without bloody clash,
To place you on a throne of love,
That our Nation, in energetic assent,
Gave life to the ideal redeemer.

Well, your brave and proud sons
who admire the peace within
will never avoid the rough battles
if they are to defend their land and their home.

Native bird that lives in your seal
protector that protects your soil
hopefully he will fly high
more than the condor and the royal eagle!

Hopefully he will fly high
more than the condor and the royal eagle
and in his wings, raise up to the sky:
Guatemala, your immortal name!

We offer free images of the Guatemala Flag in four sizes (small, medium, large, and high resolution). These images are distributed royalty free for both personal and educational use and are ideal for use in projects and on websites. If you choose to use one of our images, attribution is appreciated, but not required.

The following html code snippets can be copied and pasted to add an image of the Guatemala Flag to your website: