We carry authentic Montenegro Flags in both indoor and outdoor varieties. Our flags are proudly made in the United States from durable nylon and are printed with vibrant long-lasting inks. The Montenegro national flag is often displayed at embassies, outside of businesses associated with Montenegro, and at the homes of people who take great pride in their Montenegro heritage.

Our indoor flags are finished with a pole hem and your choice of with or without golden fringe. Gold fringe is the traditional way to display an indoor flag, however, some people choose without fringe for a simple and clean look that is also less expensive. If you are looking for a complete indoor presentation set, our Build Your Own Indoor International Flag Set program allows you to select a durable nylon indoor Montenegro Flag and choose between premium quality poles, bases, and ornaments, and tassel. For indoor applications, most buyers choose a 3ft. x 5ft. flag with an 8ft. pole, however, if you have a low ceiling, you may opt for a 7ft. pole, which is designed to work with drop ceilings. If you are looking for a very substantial international flag display, our 4ft. x 6ft. indoor flags can be paired with a 9ft. pole for our largest indoor display option.

Our outdoor international flags are finished with a canvas header and brass grommets and are offered in four sizes: 2ft. x 3ft., 3ft. x 5ft., 4ft. x 6ft., and 5ft. x 8ft., to fit any sized flagpole. Typically, outdoor flags are flown outside of government organizations, businesses, and institutions on in-ground and wall-mount flagpoles, however, some people also buy these flags to display their international pride at home. If you are looking for a wall-mount Montenegro flag set to display outside of your home, our Build Your Own Outdoor International Flag Set program will allow you to choose between premium quality 6ft. poles and brackets to display the Montenegro Flag on your front porch. Outdoor flags can also be displayed indoors on interior walls of your home with screws anchored in the wall to attach to the grommets. 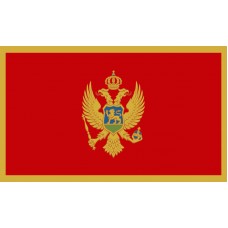 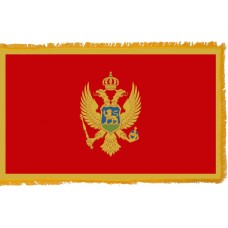 History of the Montenegro Flag

The Montenegro Flag features a red field with a yellow border with the Montenegro coat of arms in the center. The coat of arms is a double-headed golden eagle with a crown, a golden scepter in its right claw and a blue orb in the left claw. The breast shield covering the eagle features a golden lion on a green field in front of the blue sky. The crown, scepter and orb all have a cross at the top of them. The cross is very important and symbolic as it represents the country's religion of Christianity. The double-headed golden eagle represents the closeness of the church and the state and the crown represents the authority. The scepter, orb and the lion all represent power and authority. The Montenegro flag that is used today is based on the flag that was used during the reign of King Nicola I and was adopted on July 13th, 2004.

Montenegro's (also known as Crna Gora) translates as "black mountain" and is a landlocked country in Europe that shares borders with Serbia, Kosovo, Albania, Bosnia, and Herzegovina. The capital and largest city of Montenegro is called Podgorica, which, during WWII, was completely destroyed. Montenegro is a country that has been occupied throughout history by various empires and rulers and has struggled for independence. Between the 15th – 19th century, Montenegro was occupied by the Ottoman Empire until 1878 when it was declared as independent under the rule of King Nicholas I. This date (July 13th) is still celebrated today and is known as "Statehood Day" and is remembered as the day that Montenegro was recognized as the 27th independent state. In 1916-1918, Montenegro was occupied by Austria-Hungary and in 1922, it became part of the Kingdom of Yugoslavia until its collapse in 1991. It remained part of the smaller Republic of Yugoslavia, with Serbia. Montenegro did not gain independence from Serbia until 2006.

Montenegro has been described by the poet Lord Byron as "At the birth of the planet, the most beautiful encounter between land and sea must have been on the Montenegrin Coast." It is a country that has many beautiful attractions, and due to this, tourism plays a massive role on the country's economy. One of the biggest tourist attractions is "Our Lady of the Rock" (Gospa Od Skrpjela). It is a little island which features a church and a museum which requires a small taxi boat to take you there. Another very popular attraction is the cave "Crvena Stijena" which is one of Montenegro's oldest and most historical monuments and contains many cultural and ancient artifacts. The village of Mitrovica is home to one of the oldest olive trees in the world, which is over 2000 years old, called the "Stara Maslina" and is often visited by tourists as well as the beach "Velika Plaza" which is one of the longest beaches in Europe.

Oh, bright dawn of May
Our mother Montenegro
We are sons of your rocks
and keepers of your honesty

We love you, the rocky hills
And your awesome gorges
That never came to know
The chains of shameful slavery.

While our unity gives wings
to our Lov?en cause
Proud shall be, celebrated will be
Our dear homeland.

A river of our waves,
Jumping into two seas,
Will bear voice to the ocean,
That Montenegro is eternal.

We offer free images of the Montenegro Flag in four sizes (small, medium, large, and high resolution). These images are distributed royalty free for both personal and educational use and are ideal for use in projects and on websites. If you choose to use one of our images, attribution is appreciated, but not required.

The following html code snippets can be copied and pasted to add an image of the Montenegro Flag to your website: