We carry authentic Czech Republic Flags in both indoor and outdoor varieties. Our flags are proudly made in the United States from durable nylon and are printed with vibrant long-lasting inks. The Czech Republic national flag is often displayed at embassies, outside of businesses associated with Czech Republic, and at the homes of people who take great pride in their Czech Republic heritage.

Our indoor flags are finished with a pole hem and your choice of with or without golden fringe. Gold fringe is the traditional way to display an indoor flag, however, some people choose without fringe for a simple and clean look that is also less expensive. If you are looking for a complete indoor presentation set, our Build Your Own Indoor International Flag Set program allows you to select a durable nylon indoor Czech Republic Flag and choose between premium quality poles, bases, and ornaments, and tassel. For indoor applications, most buyers choose a 3ft. x 5ft. flag with an 8ft. pole, however, if you have a low ceiling, you may opt for a 7ft. pole, which is designed to work with drop ceilings. If you are looking for a very substantial international flag display, our 4ft. x 6ft. indoor flags can be paired with a 9ft. pole for our largest indoor display option.

Our outdoor international flags are finished with a canvas header and brass grommets and are offered in four sizes: 2ft. x 3ft., 3ft. x 5ft., 4ft. x 6ft., and 5ft. x 8ft., to fit any sized flagpole. Typically, outdoor flags are flown outside of government organizations, businesses, and institutions on in-ground and wall-mount flagpoles, however, some people also buy these flags to display their international pride at home. If you are looking for a wall-mount Czech Republic flag set to display outside of your home, our Build Your Own Outdoor International Flag Set program will allow you to choose between premium quality 6ft. poles and brackets to display the Czech Republic Flag on your front porch. Outdoor flags can also be displayed indoors on interior walls of your home with screws anchored in the wall to attach to the grommets. 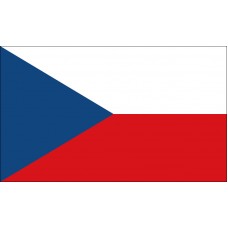 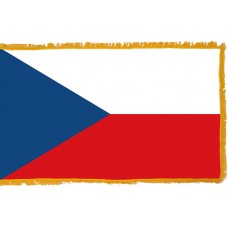 History of the Czech Republic Flag

The Czech Republic flag features a split design where the top half has a white background and the bottom half of the flag has a red background. The hoist-side of the flag features an equilateral triangle where the point of the triangle is pointing in the direction of the fly side of the flag and the point intersects the line separating the red and white portions of the flag. The white color represents the kind and honest nature of the natives of the Czech Republic, the red color represents the courage and loyalty of the citizenry, and the blue color symbolizes the vigilance of the country. The blue triangle was added to the flag to separate it from the Polish flag which had the same design. The Czech Republic flag was approved and adopted on March 30th, 1920 and was the official flag until it was banned by Nazi Germany during World War II and was adopted again in 1945.

The Czech Republic was first known as the "Duchy of Bohemia," which was ruled by the Great Moravian Empire. In 1198, it became the "Kingdom of Bohemia" as part of the Holy Roman Empire. In 1806, following the collapse of the Holy Roman Empire, the Bohemian Kingdom became part of the Austrian Empire until its collapse in 1918, after World War I. In 1918, the Czechs, Slovaks, and Ruthenians united and Czechoslovakia was established. For two years, the flag was half white and half red until it was changed in 1920 to the present flag design that is in use today. In 1939, during World War II, Germany occupied the Czech part of Czechoslovakia, resulting in the flag being banished. In 1945, following the war, the USA and Soviet Union freed Czechoslovakia which was then under the Soviet rule until 1989. In 1992, Czechoslovakia split from Slovakia and a clause was formed forbidding the Czech Republic and Slovakia from using the original flag. The Czech Republic ignored this and re adopted the flag in 1993, whilst Slovakia adopted a new flag.

The Czech Republic is a landlocked country located in Central Europe, which shares borders with Germany, Slovakia, Austria, and Poland. The largest and capital city is Prague which is home to many beautiful and scenic sights. The Czech Republic has been voted as the most visited city in Europe and its economy thrives due to the number of tourists that visit each year. One of the main tourist attractions is the "Prague Castle," which is the biggest castle in Europe, consisting of 700 rooms. Since the 18th Century, Prague has been described as the "handsomest city in Europe," and is the "castle capital of the world." This castle is also home to the "St. Vitrus Cathedral" which contains the Czech crown jewels and is the burial place of the Czech Kings. Prague is also home to Charles University which was established in 1348 and is the oldest university in Europe. The Czech Republic is mainly covered by mountains and is home to over 2,000 castles and ruins, which are popular sites amongst tourists looking to learn about history.

Where is My Home? (Kde domov muj?)

We offer free images of the Czech Republic Flag in four sizes (small, medium, large, and high resolution). These images are distributed royalty free for both personal and educational use and are ideal for use in projects and on websites. If you choose to use one of our images, attribution is appreciated, but not required.

The following html code snippets can be copied and pasted to add an image of the Czech Republic Flag to your website: