We carry authentic Philippines Flags in both indoor and outdoor varieties. Our flags are proudly made in the United States from durable nylon and are printed with vibrant long-lasting inks. The Philippines national flag is often displayed at embassies, outside of businesses associated with Philippines, and at the homes of people who take great pride in their Filipino heritage.

Our indoor flags are finished with a pole hem and your choice of with or without golden fringe. Gold fringe is the traditional way to display an indoor flag, however, some people choose without fringe for a simple and clean look that is also less expensive. If you are looking for a complete indoor presentation set, our Build Your Own Indoor International Flag Set program allows you to select a durable nylon indoor Philippines Flag and choose between premium quality poles, bases, and ornaments, and tassel. For indoor applications, most buyers choose a 3ft. x 5ft. flag with an 8ft. pole, however, if you have a low ceiling, you may opt for a 7ft. pole, which is designed to work with drop ceilings. If you are looking for a very substantial international flag display, our 4ft. x 6ft. indoor flags can be paired with a 9ft. pole for our largest indoor display option.

Our outdoor international flags are finished with a canvas header and brass grommets and are offered in four sizes: 2ft. x 3ft., 3ft. x 5ft., 4ft. x 6ft., and 5ft. x 8ft., to fit any sized flagpole. Typically, outdoor flags are flown outside of government organizations, businesses, and institutions on in-ground and wall-mount flagpoles, however, some people also buy these flags to display their international pride at home. If you are looking for a wall-mount Philippines flag set to display outside of your home, our Build Your Own Outdoor International Flag Set program will allow you to choose between premium quality 6ft. poles and brackets to display the Philippines Flag on your front porch. Outdoor flags can also be displayed indoors on interior walls of your home with screws anchored in the wall to attach to the grommets. 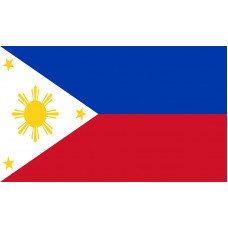 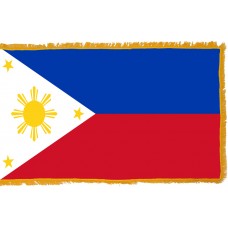 History of the Flag of the Philippines

The Philippines Flag features two horizontal bands in the colors of blue and red. In the left corner of the flag is a white triangle pointing out towards the center of the flag. The triangle features an 8-rayed sun in the middle of it and in each corner of the triangle, there is a 5-pointed yellow star. The red color of the flag represents the courage of the people in the battle for independence and the blue color represents the willingness of the people to sacrifice themselves for the country and their freedom, peace, and justice.

The triangle represents, "Liberty, equality, and fraternity." The sun on the Philippines Flag represents, "the gigantic steps made by the sons of the country along the path of progress and civilization." It represents the people's freedom as well as democracy. The eight rays of the sun represent the eight provinces that were involved in the Philippine revolution against Spain, which are, Manila, Cavite, Bulacan, Pampanga, Nueva Ecija, Tarlac, Laguna, and Batangas. The three stars represent the three main island groups of the country, which are, Luzon, Visayas, and Mindanao. The Philippines Flag was designed by Emilio Aguinaldo in 1897 and adopted on June 12th, 1898. The Philippines is one of the very few countries that uses the same national flag as a war flag. If the Philippines flag is displayed with the red color at the top, this indicates war.

The earliest inhabitants of the Philippines were the Negritos. In 1521, the first European, Portuguese explorer, Ferdinand Magellan arrived on the island and claimed the islands for Spain. In 1565, Miguel Lopez De Legazpi arrived from Mexico, Hispanic settlements were formed and the Philippines became a Spanish colony. In 1898, the Spanish-American war began in Cuba, and eventually reached the Philippines. On June 12th, 1898, Aguinaldo declared independence from Spain, even though the Spanish had sold the Philippines to the Americans and they had control over the Philippines.

This caused a lot of anger and conflict, which resulted in the Philippine-American War that caused 1,000,000 Philippines and over 5,000 Americans to either lose their lives or be wounded. The war officially ended in 1901, even though there were still battles until 1914, when the Philippines were promised independence, which they gained in 1946. The Philippines was the first Southeastern Asian country to gain independence following WWII.

Country Beloved,
Pearl of the Orient,
The burning [fervour] of the heart
In Thy Breast is alive.

Chosen Land,
Cradle Thou [art] of the valourous.
To the invaders,
Thou shalt never submit.

In [the] seas and [the] mountains,
in [the] air, and in skies of Thine azure,
There is beauty in the poem
And [in the] song for freedom beloved.

The sparkle of the flag of Thine
Is victory that is shining.
The Stars and Sun of it
Forevermore shall never darken.

Land of the sun, of glory, and loving,
Life is Heaven in Thine embrace.
'Tis our joy, when there be oppressors,
To die because of Thee.

We offer free images of the Philippines Flag in four sizes (small, medium, large, and high resolution). These images are distributed royalty free for both personal and educational use and are ideal for use in projects and on websites. If you choose to use one of our images, attribution is appreciated, but not required.

The following html code snippets can be copied and pasted to add an image of the Philippines Flag to your website:

Geographical Location of The Philippines