We carry authentic Ethiopia Flags in both indoor and outdoor varieties. Our flags are proudly made in the United States from durable nylon and are printed with vibrant long-lasting inks. The Ethiopia national flag is often displayed at embassies, outside of businesses associated with Ethiopia, and at the homes of people who take great pride in their Ethiopian heritage.

Our indoor flags are finished with a pole hem and your choice of with or without golden fringe. Gold fringe is the traditional way to display an indoor flag, however, some people choose without fringe for a simple and clean look that is also less expensive. If you are looking for a complete indoor presentation set, our Build Your Own Indoor International Flag Set program allows you to select a durable nylon indoor Ethiopia Flag and choose between premium quality poles, bases, and ornaments, and tassel. For indoor applications, most buyers choose a 3ft. x 5ft. flag with an 8ft. pole, however, if you have a low ceiling, you may opt for a 7ft. pole, which is designed to work with drop ceilings. If you are looking for a very substantial international flag display, our 4ft. x 6ft. indoor flags can be paired with a 9ft. pole for our largest indoor display option.

Our outdoor international flags are finished with a canvas header and brass grommets and are offered in four sizes: 2ft. x 3ft., 3ft. x 5ft., 4ft. x 6ft., and 5ft. x 8ft., to fit any sized flagpole. Typically, outdoor flags are flown outside of government organizations, businesses, and institutions on in-ground and wall-mount flagpoles, however, some people also buy these flags to display their international pride at home. If you are looking for a wall-mount Ethiopia flag set to display outside of your home, our Build Your Own Outdoor International Flag Set program will allow you to choose between premium quality 6ft. poles and brackets to display the Ethiopia Flag on your front porch. Outdoor flags can also be displayed indoors on interior walls of your home with screws anchored in the wall to attach to the grommets. 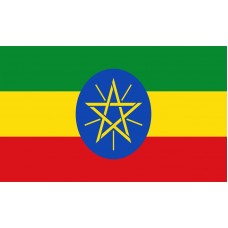 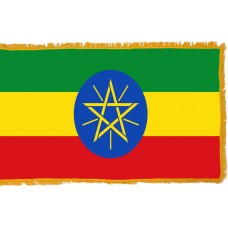 History of the Ethiopian Flag

The Ethiopia Flag reflects the country's historic struggles and its location in Africa. The flag consists of three horizontal bands with a central blue oval. The bands are colored green at the top, yellow in the middle, and red at the bottom. These colors are popular among many African nations.

The flag's central blue oval contains powerful symbols of Ethiopia's world view as the blue color is chosen to symbolize peace. The country has a history of conflict, and now looks forward to prolonged peace. Within the blue oval is a five-pointed yellow star and radiating yellow lines. The star represents the diversity of Ethiopia's people, and the lines represent the rays of the sun that shines down on the country.

The colors of the flag's background bands are also significant. The green top band reflects Ethiopia's natural beauty and is also intended as a symbol of hope. The yellow, central band stands for peace and freedom of religion. The red band at the bottom of the flag represents the blood of those generations who fought for the country's freedom.

The Ethiopia Flag has been used in its current form since 1996, however, its basic design dates back to 1914 when the country formed its own Ethiopian Empire. Before that, the country had been part of the Italian Empire which was one of the European empires that colonized most of the continent of Africa. Ethiopia was one of the earliest countries to successfully overthrow its foreign colonizers. Its three-colored flag has been used by other emerging independent African nations.

One of Ethiopia's most famous heads of state was Haile Selassie. He led the country in fighting Italian Fascist invaders under Benito Mussolini. Not only is he an Ethiopian national hero, he is revered by many people of African ancestry throughout the world. His title was Ras Tafari, with Ras meaning ruler. Rastafarians regard him as the embodiment of God on the Earth.

Ethiopia itself is a massive country with huge significance in Africa. The country lies at the north end of the Great Rift Valley, and much of the west of the country is made of up of the Ethiopian Highlands. Lake Tana is situated in this highland area and is the source of the Blue Nile, which flows into neighboring Sudan to merge with the White Nile and form the River Nile.

Ethiopia was home to the very earliest human beings. A human skull dating back to 4.2 million years ago was found in the country and the world's oldest intact skeleton was also found in Ethiopia. These have been used to examine the link between early humans and our current species, homo sapiens.

Respect for citizenship is strong in our Ethiopia;
National pride is seen, shining from one side to another.
For peace, for justice, for the freedom of peoples,
In equality and in love we stand united.
Firm of foundation, we do not dismiss humanness;
We are people who live through work.
Wonderful is the stage of tradition, mistress of a proud heritage,
Natural grace, mother of a valorous people.
We shall protect you - we have a duty;
Our Ethiopia, live! And let us be proud of you!

We offer free images of the Ethiopia Flag in four sizes (small, medium, large, and high resolution). These images are distributed royalty free for both personal and educational use and are ideal for use in projects and on websites. If you choose to use one of our images, attribution is appreciated, but not required.

The following html code snippets can be copied and pasted to add an image of the Ethiopia Flag to your website: