We carry authentic Japan Flags in both indoor and outdoor varieties. Our flags are proudly made in the United States from durable nylon and are printed with vibrant long-lasting inks. The Japan national flag is often displayed at embassies, outside of businesses associated with Japan, and at the homes of people who take great pride in their Japanese heritage.

Our indoor flags are finished with a pole hem and your choice of with or without golden fringe. Gold fringe is the traditional way to display an indoor flag, however, some people choose without fringe for a simple and clean look that is also less expensive. If you are looking for a complete indoor presentation set, our Build Your Own Indoor International Flag Set program allows you to select a durable nylon indoor Japan Flag and choose between premium quality poles, bases, and ornaments, and tassel. For indoor applications, most buyers choose a 3ft. x 5ft. flag with an 8ft. pole, however, if you have a low ceiling, you may opt for a 7ft. pole, which is designed to work with drop ceilings. If you are looking for a very substantial international flag display, our 4ft. x 6ft. indoor flags can be paired with a 9ft. pole for our largest indoor display option.

Our outdoor international flags are finished with a canvas header and brass grommets and are offered in four sizes: 2ft. x 3ft., 3ft. x 5ft., 4ft. x 6ft., and 5ft. x 8ft., to fit any sized flagpole. Typically, outdoor flags are flown outside of government organizations, businesses, and institutions on in-ground and wall-mount flagpoles, however, some people also buy these flags to display their international pride at home. If you are looking for a wall-mount Japan flag set to display outside of your home, our Build Your Own Outdoor International Flag Set program will allow you to choose between premium quality 6ft. poles and brackets to display the Japan Flag on your front porch. Outdoor flags can also be displayed indoors on interior walls of your home with screws anchored in the wall to attach to the grommets.

In addition to the flags we offer for purchase, we maintain an archive of the audio and lyrics of the Japan National Anthem, historical information about the Japan flag, demographic data about Japan, and free high resolution images of the Japan flag for use in projects and on websites. 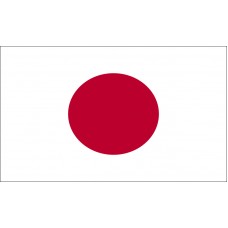 History of the Japanese Flag

The Japan Flag is comprised of a white rectangle with a red circle in the center. The circle represents the sun, which is important to the Japanese people, while the white background is symbolic of honesty and integrity which are highly valued in Japan. The flag represents the country's cultural history and national value system. It is officially called the Nisshoki, which means "sun mark flag," but is more commonly known throughout the country as Hi no maru, which means "circle of the sun."

Japan is known across the world as the "Land of the Rising Sun," as the country lies to the west of the Pacific Ocean and has vast coastlines, which makes it perfectly placed to witness the daily sunrise. The sun has played a huge part in the development of the Japanese people over thousands of years. It is linked directly with original Japanese religion and system of government.

For much of its history, Japan felt no need to have a national flag. Its current design was only officially recognized in 1999, when the Law Regarding the National Flag and National Anthem was enacted. The red sun disc design has been a part of Japanese culture for much longer than the country itself has existed. It is intrinsically linked to the Emperor of Japan, a position held today by Akihito.

Akihito is the most recent of a line of Emperors of Japan dating back nearly 2,000 years. As such, it is the longest surviving ancestral dynasty in the world. Its founder was Emperor Jimmu, who was himself believed to be descended from the Japanese sun goddess Amaterasu.

Amaterasu is a vital part of the Shinto religion. The Japan Flag is a link between the country, its Emperor, and this religion. Shinto is unique to Japan, and is a system of living rather than a belief in any particular God. It gives the Japanese people a way of remaining connected to their past in one of the world's most dynamic economies.

Japan is a country of huge contrasts. Its cities are the envy of many countries, but they nestle in a landscape of mountains in a country prone to earthquakes and volcanic eruptions. Shinto means “way of the Gods.” By practicing it, Japanese people carry out daily exercises and rituals which give spiritual meaning to physical things. These can be trees, rivers, or people. In following Shinto, the Japanese people connect daily to Amaterasu, who is represented by the red disc on their national flag.

The people of Japan have a very special relationship with their country in many ways. This is represented by the simplicity of their national flag. Instantly recognizable around the world, the Circle of the Sun is a unique symbol of a unique country.

Parliamentary government with a constitutional monarchy

The Reign of Our Emperor (Kimigayo)

May your reign
Continue for a thousand, eight thousand generations,
Until the pebbles
Grow into boulders
Lush with moss

We offer free images of the Japan Flag in four sizes (small, medium, large, and high resolution). These images are distributed royalty free for both personal and educational use and are ideal for use in projects and on websites. If you choose to use one of our images, attribution is appreciated, but not required.

The following html code snippets can be copied and pasted to add an image of the Japan Flag to your website: