Our indoor flags are finished with a pole hem and your choice of with or without golden fringe. Gold fringe is the traditional way to display an indoor flag, however, some people choose without fringe for a simple and clean look that is also less expensive. If you are looking for a complete indoor presentation set, our Build Your Own Indoor International Flag Set program allows you to select a durable nylon indoor Central Africa Republic Flag and choose between premium quality poles, bases, and ornaments, and tassel. For indoor applications, most buyers choose a 3ft. x 5ft. flag with an 8ft. pole, however, if you have a low ceiling, you may opt for a 7ft. pole, which is designed to work with drop ceilings. If you are looking for a very substantial international flag display, our 4ft. x 6ft. indoor flags can be paired with a 9ft. pole for our largest indoor display option.

Our outdoor international flags are finished with a canvas header and brass grommets and are offered in four sizes: 2ft. x 3ft., 3ft. x 5ft., 4ft. x 6ft., and 5ft. x 8ft., to fit any sized flagpole. Typically, outdoor flags are flown outside of government organizations, businesses, and institutions on in-ground and wall-mount flagpoles, however, some people also buy these flags to display their international pride at home. If you are looking for a wall-mount Central Africa Republic flag set to display outside of your home, our Build Your Own Outdoor International Flag Set program will allow you to choose between premium quality 6ft. poles and brackets to display the Central Africa Republic Flag on your front porch. Outdoor flags can also be displayed indoors on interior walls of your home with screws anchored in the wall to attach to the grommets. 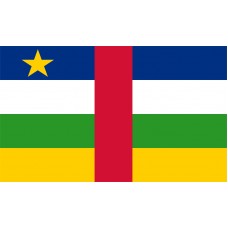 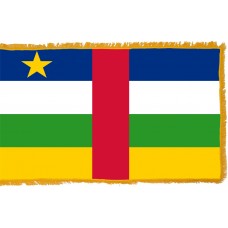 History of the Central African Republic

The Central African Republic flag was adopted in 1958 and is comprised of four equal-sized horizontal stripes in the colors blue, white, green, and yellow. In the middle of the flag, a vertical red stripe cuts through the four horizontal stripes from the top to the bottom of the flag. A yellow 5-pointed star is positioned in the left-hand corner of the flag. The colors used signify the harmony between the Europeans and the Africans. The red, white, and blue colors pay homage to the French tricolor flag, while the red, yellow, and green colors are the Pan-African colors. The red vertical stripe is the common color amongst both the Pan African and French colors and runs across the other four colors to symbolize the unity. The 5-pointed yellow star in the corner symbolizes independence. The red color also signifies the fight for independence and the bloodshed, the blue color represents freedom, the white color signifies peace, and the yellow color stands for independence and the savannas within the country. The Central African Republic Flag was adopted on December 1st, 1958, when the country became the "Central African Republic."

The Central African Republic is a very poor country, however, it is home to many beautiful landmarks and scenery that attracts tourists. The capital city, Bagui is located on the Ubagi River and is home to many attractions including the central market (renowned for malachite necklaces), Boganda museum, the cathedral, and the Saint Paul mission. The landscape of the Central African Republic consists mainly of savannas. The country is home to the most lowland gorillas and forest elephants in the world. Other natural attractions in the country include "Boali Falls," the "Dzanga-Ndoki National Park," where the biggest forest in the country resides as well as the largest population of gorillas, and the "Kaga-Kpoungouvou caves," which are famous for providing housing and refuge for slaves during their escape before slavery was abolished.

Oh! Central Africa, cradle of the Bantu!
Take up again your right to respect, to life!
Long subjugated, long scorned by all,
But, from today, breaking tyranny's hold.
Through work, order and dignity
You reconquer your rights, your unity,
And to take this new step
The voice of our ancestors call us.

To work! In order and dignity,
in the respect for rights and in unity,
Breaking poverty and tyranny,
Holding high the flag of the Fatherland.

We offer free images of the Central Africa Republic Flag in four sizes (small, medium, large, and high resolution). These images are distributed royalty free for both personal and educational use and are ideal for use in projects and on websites. If you choose to use one of our images, attribution is appreciated, but not required.

Add the Central Africa Republic Flag to your Website:

The following html code snippets can be copied and pasted to add an image of the Central Africa Republic Flag to your website: