We carry authentic Honduras Flags in both indoor and outdoor varieties. Our flags are proudly made in the United States from durable nylon and are printed with vibrant long-lasting inks. The Honduras national flag is often displayed at embassies, outside of businesses associated with Honduras, and at the homes of people who take great pride in their Honduras heritage.

Our indoor flags are finished with a pole hem and your choice of with or without golden fringe. Gold fringe is the traditional way to display an indoor flag, however, some people choose without fringe for a simple and clean look that is also less expensive. If you are looking for a complete indoor presentation set, our Build Your Own Indoor International Flag Set program allows you to select a durable nylon indoor Honduras Flag and choose between premium quality poles, bases, and ornaments, and tassel. For indoor applications, most buyers choose a 3ft. x 5ft. flag with an 8ft. pole, however, if you have a low ceiling, you may opt for a 7ft. pole, which is designed to work with drop ceilings. If you are looking for a very substantial international flag display, our 4ft. x 6ft. indoor flags can be paired with a 9ft. pole for our largest indoor display option.

Our outdoor international flags are finished with a canvas header and brass grommets and are offered in four sizes: 2ft. x 3ft., 3ft. x 5ft., 4ft. x 6ft., and 5ft. x 8ft., to fit any sized flagpole. Typically, outdoor flags are flown outside of government organizations, businesses, and institutions on in-ground and wall-mount flagpoles, however, some people also buy these flags to display their international pride at home. If you are looking for a wall-mount Honduras flag set to display outside of your home, our Build Your Own Outdoor International Flag Set program will allow you to choose between premium quality 6ft. poles and brackets to display the Honduras Flag on your front porch. Outdoor flags can also be displayed indoors on interior walls of your home with screws anchored in the wall to attach to the grommets. 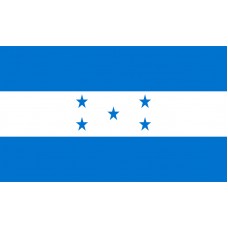 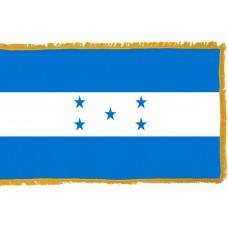 History of the Honduran Flag

The flag of Honduras was based on the flag that was used for the Federal Republic of Central America that was in use from 1823 in the country when it joined the United Provinces of Central America. This flag consisted of three horizontal bands of color, two of cerulean blue, one at the top and one at the bottom, and a white band in the middle, all of equal width. It was amended in 1866 to include five stars, again in the cerulean blue color which were set in the shape of a cross on the central white band.

Like many of the flags of Central American countries the two bands of blue represent the two seas that the country sits between, The Pacific and Atlantic (Caribbean), and white represents the land, the prosperity and peace of its people. The added stars are to represent the former five countries of the Central American Republic - Guatemala, Costa Rica, El Salvador, Nicaragua, and Honduras.

One of the key aspects of Honduras is its many water features, as well as the country's two coastlines. It also has a number of rivers, swamps, lakes, waterfalls, and hot springs, many of which are hidden in its dense areas of jungle.

One of the most important of these water features is the The Mesoamerican Reef System, also known as the Great Mayan Reef which lies off its coast and includes the Honduras Bay Islands. This gives Honduras the honor of having the second most number of coral reefs in the world, just behind Australia which is number one. This vast natural phenomenon which stretches seven hundred miles down the coasts of Mexico, Belize, Guatemala, and Honduras is an important habitat for many types of fish, turtles, and sharks as well as housing a stunning array of different corals. It also takes in the mangroves of the coastal region which again support a variety of animals and birds and also help to protect the shores from hurricanes and storms.

In contrast to the wealth of the seas off Honduras the country is also known for its extensive rain forests including the Rio Platano Biosphere Reserve, which in 1982 was added to the UNESCO World Heritage Sites. It is home to a number of endangered species and is one of the largest protected areas in the country covering 350,000 hectares.

With such a bio diverse range of areas housing 6,000 plant species, 110 mammalian species, 700 bird species, and 250 reptile and amphibians it is no wonder that Honduras is one of the most ecologically protected regions in Latin America. To date it has two biosphere reserves and twenty national parks.

It is easy to see why so much importance is placed on both the land and sea and why the people of Haiti have chosen these to be represented on the flag of Honduras.

Your flag is a splendor of sky
Crossed with a band of snow;
And there can be seen, in its sacred depths,
Five pale blue stars.
In your emblem, which a rough sea
With its wild waves shields,
Behind the bare summit of a volcano,
There is a star of clean light.

Indian maiden, virgin and beautiful you slept,
Of your seas to the resonant song,
When lying in your valleys of gold,
The bold navigator found you;
And on seeing your enrapturing beauty,
To the inflowing ideal of your enchantment,
The blue hem of your splendid mantle
With a kiss of love blessed.

From a country where the sun rises,
Beyond the blue Atlantic,
That man who had dreamt you
In search of you he launched to sea.
When you raised your pale forehead,
In the lively anxiousness of your hope,
Under the gentle dome of your sky
Already floated a strange banner.

It was useless that your beloved Indian
Rushed into the fight with ire,
Because, covered with his blood, Lempira,
In the deep night he sank;
And of the heroic deed, in memory,
The legend alone has kept
A sepulcher in a forgotten place,
And the severe profile of a mountain peak.

It was France, the free, the heroic,
Which in its dreams of centuries slept,
Awoke irate to life
At the virile protest of Danton:
It was France, who sent to the death
The head of the consecrated King,
And which built up proudly at its side,
The altar of the goddess of Reason.

You also, oh my country!, arose
From your servile deep sleep;
You also showed the world
The infamous shackle destroyed.
And in your blessed soil, behind the tall
Hair of the wild jungle,
Like a bird of black feathers,
The fleeting colony was lost.

To guard this divine emblem
We shall march, oh fatherland, to the death;
Our luck will be generous
If we die thinking of your love.
Defending your holy flag,
And shrouded in its glorious folds,
There will be many, Honduras, your dead,
But all shall fall with honor.

We offer free images of the Honduras Flag in four sizes (small, medium, large, and high resolution). These images are distributed royalty free for both personal and educational use and are ideal for use in projects and on websites. If you choose to use one of our images, attribution is appreciated, but not required.

The following html code snippets can be copied and pasted to add an image of the Honduras Flag to your website: