We carry authentic British Flags in both indoor and outdoor varieties. Our flags are proudly made in the United States from durable nylon and are printed with vibrant long-lasting inks. The United Kingdom national flag is often displayed at embassies, outside of businesses associated with United Kingdom, and at the homes of people who take great pride in their British heritage.

Our indoor flags are finished with a pole hem and your choice of with or without golden fringe. Gold fringe is the traditional way to display an indoor flag, however, some people choose without fringe for a simple and clean look that is also less expensive. If you are looking for a complete indoor presentation set, our Build Your Own Indoor International Flag Set program allows you to select a durable nylon indoor United Kingdom Flag and choose between premium quality poles, bases, and ornaments, and tassel. For indoor applications, most buyers choose a 3ft. x 5ft. flag with an 8ft. pole, however, if you have a low ceiling, you may opt for a 7ft. pole, which is designed to work with drop ceilings. If you are looking for a very substantial international flag display, our 4ft. x 6ft. indoor flags can be paired with a 9ft. pole for our largest indoor display option.

Our outdoor international flags are finished with a canvas header and brass grommets and are offered in four sizes: 2ft. x 3ft., 3ft. x 5ft., 4ft. x 6ft., and 5ft. x 8ft., to fit any sized flagpole. Typically, outdoor flags are flown outside of government organizations, businesses, and institutions on in-ground and wall-mount flagpoles, however, some people also buy these flags to display their international pride at home. If you are looking for a wall-mount United Kingdom flag set to display outside of your home, our Build Your Own Outdoor International Flag Set program will allow you to choose between premium quality 6ft. poles and brackets to display the United Kingdom Flag on your front porch. Outdoor flags can also be displayed indoors on interior walls of your home with screws anchored in the wall to attach to the grommets. 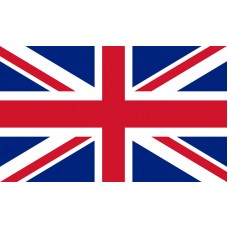 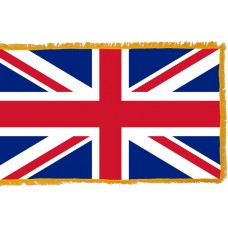 History of the British Flag

The Wales Flag (Wales is part of the United Kingdom) was not added on as Wales was already part of England (a union was formed in 1284) at the time the flag was designed in 1606. The United Kingdom flag is one of the oldest flags in the world as well as one of the most recognized flags in the world and was proclaimed by James I when he became King of England and King of Scotland following Queen Elizabeth I death, and he wanted to combine the two crosses of the nations.

The United Kingdom (officially known as the United Kingdom of Great Britain and Northern Ireland) is made up of four countries which are England, Scotland, Northern Ireland, and Wales and is located in Europe. The capital and largest city is London which is also the largest city in Europe. It is thought that the first people to occupy England were after the last Ice Age. There is much history surrounding the United Kingdom and between the 17th and 20th centuries, it held very high power and control in the world, becoming a colonial empire that ruled many different countries and areas in Africa, Asia, North America, and Oceania.

The United Kingdom has the fifth largest economy in the world and a lot of the economy is based on its agriculture and natural resources, such as, iron, clay, lead, and coal amongst others. Tourism also plays a major role in the economy and the United Kingdom is the sixth most visited tourist destination in the world. The main attraction and the most visited in the United Kingdom is the Tower of London, which is thought to be the most famous castle in the world and is home to royalty's crown jewels. Windsor Castle is also another popular attraction and is the largest royal home in the world as well as the oldest one as it was built by William the Conqueror in 1080AD and is still inhabited.

God Save the Queen

O Lord, our God, arise,
Scatter her enemies,
And make them fall.
Confound their politics,
Frustrate their knavish tricks,
On Thee our hopes we fix,
God save us all.

Thy choicest gifts in store,
On her be pleased to pour;
Long may she reign:
May she defend our laws,
And ever give us cause
To sing with heart and voice
God save the Queen

We offer free images of the United Kingdom Flag in four sizes (small, medium, large, and high resolution). These images are distributed royalty free for both personal and educational use and are ideal for use in projects and on websites. If you choose to use one of our images, attribution is appreciated, but not required.

The following html code snippets can be copied and pasted to add an image of the United Kingdom Flag to your website:

Geographical Location of The United Kingdom