We carry authentic Colombia Flags in both indoor and outdoor varieties. Our flags are proudly made in the United States from durable nylon and are printed with vibrant long-lasting inks. The Colombia national flag is often displayed at embassies, outside of businesses associated with Colombia, and at the homes of people who take great pride in their Colombian heritage.

Our indoor flags are finished with a pole hem and your choice of with or without golden fringe. Gold fringe is the traditional way to display an indoor flag, however, some people choose without fringe for a simple and clean look that is also less expensive. If you are looking for a complete indoor presentation set, our Build Your Own Indoor International Flag Set program allows you to select a durable nylon indoor Colombia Flag and choose between premium quality poles, bases, and ornaments, and tassel. For indoor applications, most buyers choose a 3ft. x 5ft. flag with an 8ft. pole, however, if you have a low ceiling, you may opt for a 7ft. pole, which is designed to work with drop ceilings. If you are looking for a very substantial international flag display, our 4ft. x 6ft. indoor flags can be paired with a 9ft. pole for our largest indoor display option.

Our outdoor international flags are finished with a canvas header and brass grommets and are offered in four sizes: 2ft. x 3ft., 3ft. x 5ft., 4ft. x 6ft., and 5ft. x 8ft., to fit any sized flagpole. Typically, outdoor flags are flown outside of government organizations, businesses, and institutions on in-ground and wall-mount flagpoles, however, some people also buy these flags to display their international pride at home. If you are looking for a wall-mount Colombia flag set to display outside of your home, our Build Your Own Outdoor International Flag Set program will allow you to choose between premium quality 6ft. poles and brackets to display the Colombia Flag on your front porch. Outdoor flags can also be displayed indoors on interior walls of your home with screws anchored in the wall to attach to the grommets. 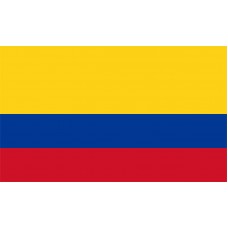 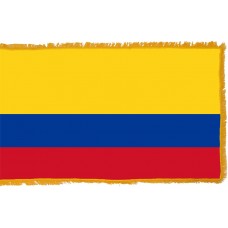 History of the Colombia Flag

The Colombian Flag features a tricolor design where the top yellow stripe takes up 50% of the height of the flag and the blue and red stripes beneath this each take up 25% of the height of the flag. There are several interpretations for the meanings of the colors used on the Colombian flag. One interpretation is that the yellow color symbolizes gold, the richness of the country's soil, and agriculture, while others suggests that the yellow color represents the harmony and justice of the country, as well as the sun. Likewise, according to some sources, the blue color represents the oceans and the sky, whereas others claim that it represents loyalty and attention paid to the country from the people of Colombia. The red color, according to some, is said to signify the blood that was shed in the fight for the country's independence, while other sources suggest that red signifies the determination and dedication of the people. The Colombian flag was created by Francisco de Mirandoshares and adopted on November 26th, 1861. This flag shares the same colors with the flags of Venezuela and Ecuador and is one of the oldest flags in the world.

In 1499, the Spanish arrived in the area now known as Colombia and created the Spanish colony, New Granada. Colombia was under Spanish rule for 250 years. In 1808, when the French invaded Spain, it was an opportunity to try and seek independence. During the first attempts for independence, they were defeated and in 1819, following the collapse of the Spanish Empire, the Colombian forces (led by Venezuelan general Simon Bolivar) claimed victory against the Spanish and Colombia. Venezuela, Ecuador, and Panama declared independence and the country "Gran Colombia" was formed. In 1830, Venezuela and Ecuador separated, leaving Colombia and Panama together until 1835, when Colombia became a separate nation.

Colombia is home to many beautiful sites, which attract tourists to the country. The Salt Cathedral of Zipaquira, located in Bogoto, is an underground church that attracts around 3000 visitors each Sunday for worship. Bogoto is a city known for its beautiful street art; in fact, the city is unique in that street art and graffiti are permitted and encouraged by the government.

Colombia is also known for its natural attractions, in fact the country is thought to be the 2nd most biodiverse country, with the the largest number of species in the world. One natural attraction is the Cano Cristales, also known as the "River of Five Colors," which is a striking river that changes colors between yellow, red, green, blue, and black. Visitors to Colombia also have the opportunity to see the tallest palm trees in the world, with some measuring as high as 60m tall.

The horrible night has ceased,
the sublime liberty
spills the auroras
of its invincible light.
All humanity,
which moans within chains,
understands the words
of He who died on the Cross.

"Independence!" cries
the American world;
soaked in blood of heroes
the land of Columbus.
Still, one great principle,
"The king is not sovereign",
resounds, and those who suffer
bless their passion.

The Orinoco's bed
fills with the remains,
of blood and tears a river
is there seen flowing.
In BÃ¡rbula they don't know
the souls nor the eyes,
if admiration or horror
feel or suffer.

On the shores of the Caribbean,
famished the people fight,
horrors preferring
to treacherous health.
O, aye! for Cartagena
the abnegation is much,
and the shambles of death
its courage despises .

From BoyacÃ¡ in the fields,
the genius of glory,
for every ear a hero
undefeated crowned.
Soldiers without breastplate
won victory;
their virile breath
as shield served.

Bolivar crosses the Andes
that two oceans bathe,
swords as sparks
shine in JunÃ­n.
Untameable centaurs
descend to the plains,
and a prescience begins to be felt,
of the epic the end.

The victorious trumpet
in Ayacucho thunders,
that in every triumph grows
its formidable sound.
In its expansive thrust
Liberty is worn for the first time,
from the American sky
a pavilion forming.

The virgin her hairs
pulls out in agony
and from her beloved widowed
hangs them on a cypress.
Regretting her hope
covered by a cold headstone,
but glorious pride
hallows her fair skin.

Thus the motherland is formed,
Thermopylaes are breaking forth;
constellation of cyclops
its night brightened.
The trembling flower
finding the wind mortal,
underneath the laurels
safety sought.

But it's not complete glory
to defeat in battle,
that the arm that fights
is encouraged by truth.
Independence alone
The great clamour doesn't silence;
if the sun illuminates everyone,
justice is liberty.

From men the rights
NariÃ±o's preaching,
the soul of struggle
prophetically taught.
Ricaurte in San Mateo,
in atoms flying,
"Duty before life,"
with flames he wrote.

We offer free images of the Colombia Flag in four sizes (small, medium, large, and high resolution). These images are distributed royalty free for both personal and educational use and are ideal for use in projects and on websites. If you choose to use one of our images, attribution is appreciated, but not required.

The following html code snippets can be copied and pasted to add an image of the Colombia Flag to your website: