We carry authentic Bhutan Flags in both indoor and outdoor varieties. Our flags are proudly made in the United States from durable nylon and are printed with vibrant long-lasting inks. The Bhutan national flag is often displayed at embassies, outside of businesses associated with Bhutan, and at the homes of people who take great pride in their Bhutan heritage.

Our indoor flags are finished with a pole hem and your choice of with or without golden fringe. Gold fringe is the traditional way to display an indoor flag, however, some people choose without fringe for a simple and clean look that is also less expensive. If you are looking for a complete indoor presentation set, our Build Your Own Indoor International Flag Set program allows you to select a durable nylon indoor Bhutan Flag and choose between premium quality poles, bases, and ornaments, and tassel. For indoor applications, most buyers choose a 3ft. x 5ft. flag with an 8ft. pole, however, if you have a low ceiling, you may opt for a 7ft. pole, which is designed to work with drop ceilings. If you are looking for a very substantial international flag display, our 4ft. x 6ft. indoor flags can be paired with a 9ft. pole for our largest indoor display option.

Our outdoor international flags are finished with a canvas header and brass grommets and are offered in four sizes: 2ft. x 3ft., 3ft. x 5ft., 4ft. x 6ft., and 5ft. x 8ft., to fit any sized flagpole. Typically, outdoor flags are flown outside of government organizations, businesses, and institutions on in-ground and wall-mount flagpoles, however, some people also buy these flags to display their international pride at home. If you are looking for a wall-mount Bhutan flag set to display outside of your home, our Build Your Own Outdoor International Flag Set program will allow you to choose between premium quality 6ft. poles and brackets to display the Bhutan Flag on your front porch. Outdoor flags can also be displayed indoors on interior walls of your home with screws anchored in the wall to attach to the grommets.

In addition to the flags we offer for purchase, we maintain an archive of historical information about the Bhutan flag, demographic data about Bhutan, and free high resolution images of the Bhutan flag for use in projects and on websites. 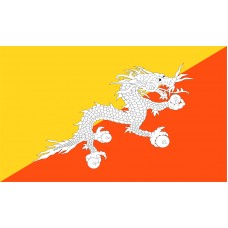 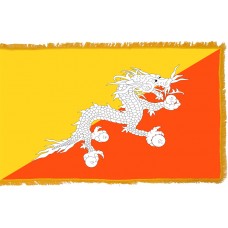 History of the Bhutan Flag

The Bhutan flag a diagonally split from the bottom left to the rop right. The upper hoist-side triangle has a yellow background, while the lower fly-side triangle has an orange background. The central feature of the flag along the dividing line is a large white dragon holding jewels in each of his four claws. The yellow color represents the monarchy, the white color symbolizes purity, and the color orange is symbolic of the Drukpa Monasteries in the country. The jewels that the dragon is holding signify the wealth of the protection of the people in Bhutan and the mouth of the dragon represents for the strength of the people who strive to protect the country. The design elements of the Bhutan flag are derived from the tradition of Tibetan Buddhism. This flag is one of only two flags in the world to feature a dragon; The other flag that includes a dragon is the Welsh flag. The current Bhutan flag was adopted in 1965.

The dragon is a very meaningful symbol to the people of Bhutan as it represents its name. In the national language, Bhutan is called "DrukYal," which translates as "Land of the Dragon." The name pays homage to the loud thunderstorms that echo through the valleys. Tradition says that the loud thunder is actually the voice of a roaring dragon.

Bhutan is a small landlocked country located in South Asia amidst the Eastern Himalayas. The primary religion in Bhutan is Buddhism, which was introduced in the 7th Century AD. The second most popular religion is Hinduism. Bhutan was only recently recognized in 1974 as a country by the United Nations.

The country is governed by a King, Prime minister and Parliament. Bhutan is a very isolated country; In fact, prior to 1974, foreigners were not even allowed to enter the country, and still today, the people of Bhutan are not allowed to marry foreigners. It has a very rudimentary economy, which relies primarily on agriculture and farming as the central industry.

Bhutan has some of the strictest wildlife, environmental, and animal protection laws in the world. For example, if anyone is seen or caught killing an endangered species, in Bhutan they will be sentenced to life imprisonment. The people of Bhutan and their monarch hold very high respect to the environment that even hiking, and mountain climbing is forbidden. This means that the mountain, "Gangkhar Puensum" that is the highest point in Bhutan is also the highest mountain in the world that has never been climbed.

Bhutan remains a very traditional country and the men and women are still expected to dress in the traditional clothing. The men must wear knee-length garments and the women must wear ankle-length dresses. It is the only country in the world that measures national happiness since the King affirmed the policy of, "gross national happiness" making the wellbeing and happiness of the people more important than money. It is also the only country where all citizens become a year older on New Year's Day and the only country where the production and sale of tobacco is banned.

We offer free images of the Bhutan Flag in four sizes (small, medium, large, and high resolution). These images are distributed royalty free for both personal and educational use and are ideal for use in projects and on websites. If you choose to use one of our images, attribution is appreciated, but not required.

The following html code snippets can be copied and pasted to add an image of the Bhutan Flag to your website: