We carry authentic Qatar Flags in both indoor and outdoor varieties. Our flags are proudly made in the United States from durable nylon and are printed with vibrant long-lasting inks. The Qatar national flag is often displayed at embassies, outside of businesses associated with Qatar, and at the homes of people who take great pride in their Qatar heritage.

Our indoor flags are finished with a pole hem and your choice of with or without golden fringe. Gold fringe is the traditional way to display an indoor flag, however, some people choose without fringe for a simple and clean look that is also less expensive. If you are looking for a complete indoor presentation set, our Build Your Own Indoor International Flag Set program allows you to select a durable nylon indoor Qatar Flag and choose between premium quality poles, bases, and ornaments, and tassel. For indoor applications, most buyers choose a 3ft. x 5ft. flag with an 8ft. pole, however, if you have a low ceiling, you may opt for a 7ft. pole, which is designed to work with drop ceilings. If you are looking for a very substantial international flag display, our 4ft. x 6ft. indoor flags can be paired with a 9ft. pole for our largest indoor display option.

Our outdoor international flags are finished with a canvas header and brass grommets and are offered in four sizes: 2ft. x 3ft., 3ft. x 5ft., 4ft. x 6ft., and 5ft. x 8ft., to fit any sized flagpole. Typically, outdoor flags are flown outside of government organizations, businesses, and institutions on in-ground and wall-mount flagpoles, however, some people also buy these flags to display their international pride at home. If you are looking for a wall-mount Qatar flag set to display outside of your home, our Build Your Own Outdoor International Flag Set program will allow you to choose between premium quality 6ft. poles and brackets to display the Qatar Flag on your front porch. Outdoor flags can also be displayed indoors on interior walls of your home with screws anchored in the wall to attach to the grommets.

In addition to the flags we offer for purchase, we maintain an archive of the audio and lyrics of the Qatar National Anthem, historical information about the Qatar flag, demographic data about Qatar, and free high resolution images of the Qatar flag for use in projects and on websites. 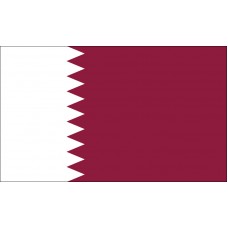 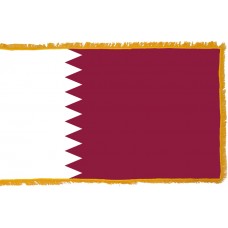 History of the Qatar Flag

The Qatar Flag is white on the left hand side and maroon on the right hand side. The two colors are divided by nine serrated white edges. The color of the flag represents peace and the maroon color represents the blood shed during the various Qatari wars. The nine white serrated edges represent Qatar being included as the ninth member of the "reconciled emirates." The Qatar flag was adopted on September 3rd, 1971 and is the only flag where the width is twice the length of the height. The Qatar flag holds very close resemblance to the Bahrain Flag.

Qatar (known as the State of Qatar) is located in Asia and shares a border with Saudi Arabia and is surrounded by the Persian Gulf. The capital and largest city of Qatar is called Doha. Over half of Qatar's population live in Doha and it is the fastest growing city in Qatar. The second largest city is called Al Wakrah. Qatar is thought to be one of the richest countries in the world today with oil exportation being its biggest income. It is also a very big exporter of natural gas. The oil in Qatar was discovered during the 1940s and by the 1950s it had become the main revenue and the biggest contributor to the economy.

It is thought that the first settlements in Qatar existed in the stone age from relics that have been found and discovered over the years. From 1871-1915, Qatar was under the Ottoman rule, until it became a British Protectorate on November 3rd, 1916. In 1968, the British announced that they would be withdrawing from Qatar and on September 3rd, 1971, Qatar became an independent nation.

As well as the oil and gas, tourism has started to also contribute to the economy. The main tourist attraction is the "Aspire Academy Sports Dome" that is located in Doha. It is one of the biggest sports domes in the world and features a 200m track, diving pool, Olympic-sized pool, full length football pitch, squash courts, and many other various sports areas. Another attraction is the "Zubarah" which is also classed as a world heritage site and it is an ancient fort and ruins that were founded during the early 18th century.

The "Imam Abdul Wahhab Mosque" also known as the "State Grand Mosque" is the largest mosque that Qatar is home to and has 90 domes. The small village of Al Thakira is also recommended to tourists as there is a wide variety of marine life to be seen. It is expected to attract a lot more tourists over the next few years and get more popular, especially as the 2022 football World Cup will be held here, which makes Qatar the first Arab country (as well as the smallest country) to ever host the world cup.

Swearing by God who erected the sky
Swearing by God who spread the light
Qatar will always be free
Sublimed by the souls of the sincere
Proceed thou on the manners of the ascendants
And advance on Prophet's guidance
In my heart,
Qatar is an epic of glory and dignity
Qatar is land of the early men
Who protect us in time of distress,
Doves they can be at times of peace,
Warriors they are at times of sacrifice

We offer free images of the Qatar Flag in four sizes (small, medium, large, and high resolution). These images are distributed royalty free for both personal and educational use and are ideal for use in projects and on websites. If you choose to use one of our images, attribution is appreciated, but not required.

The following html code snippets can be copied and pasted to add an image of the Qatar Flag to your website: