We carry authentic Mauritius Flags in both indoor and outdoor varieties. Our flags are proudly made in the United States from durable nylon and are printed with vibrant long-lasting inks. The Mauritius national flag is often displayed at embassies, outside of businesses associated with Mauritius, and at the homes of people who take great pride in their Mauritius heritage.

Our indoor flags are finished with a pole hem and your choice of with or without golden fringe. Gold fringe is the traditional way to display an indoor flag, however, some people choose without fringe for a simple and clean look that is also less expensive. If you are looking for a complete indoor presentation set, our Build Your Own Indoor International Flag Set program allows you to select a durable nylon indoor Mauritius Flag and choose between premium quality poles, bases, and ornaments, and tassel. For indoor applications, most buyers choose a 3ft. x 5ft. flag with an 8ft. pole, however, if you have a low ceiling, you may opt for a 7ft. pole, which is designed to work with drop ceilings. If you are looking for a very substantial international flag display, our 4ft. x 6ft. indoor flags can be paired with a 9ft. pole for our largest indoor display option.

Our outdoor international flags are finished with a canvas header and brass grommets and are offered in four sizes: 2ft. x 3ft., 3ft. x 5ft., 4ft. x 6ft., and 5ft. x 8ft., to fit any sized flagpole. Typically, outdoor flags are flown outside of government organizations, businesses, and institutions on in-ground and wall-mount flagpoles, however, some people also buy these flags to display their international pride at home. If you are looking for a wall-mount Mauritius flag set to display outside of your home, our Build Your Own Outdoor International Flag Set program will allow you to choose between premium quality 6ft. poles and brackets to display the Mauritius Flag on your front porch. Outdoor flags can also be displayed indoors on interior walls of your home with screws anchored in the wall to attach to the grommets. 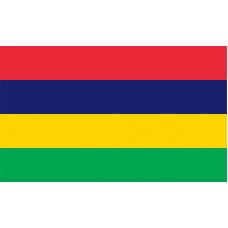 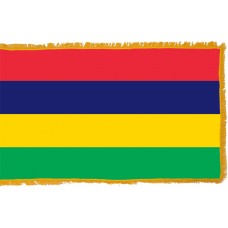 History of the Mauritius Flag

Mauritius is an African island nation in the Indian Ocean. The island was created more than 8 million years ago through volcanic activity and is mainly surrounded by coral reefs. Mauritius is made up of many islands, with the main ones being, The Island of Rodrigues, Agalega Islands, and Cargados Carajos Shoals. It is part of the Mascarene Islands along with Rodrigues and Reunion. The capital city of Mauritius is called Port Louis and it is the wealthiest capital city in Africa. Mauritius is the richest and most densely populated country in Africa.

Mauritius was first discovered by Arab sailors and was named "Dina Arobi." In 1507, Portuguese explorer, Diogo Fernandes Pereira was the first European to arrive on the island and named it "Ilha do Cirne." In 1598, the Dutch fleet arrived in Mauritius, led by Admiral Wybrand Van Warwyk who named the island Mauritius after Prince Maurice Van Nassau who was the ruler of the Dutch republic and in 1638, the Dutch established a colony.

During the Dutch rule, sugarcane was introduced to the island. In 1710, the Dutch abandoned Mauritius and France took control of it in 1715 and renamed it "Isle De France." During the French rule, the capital Port Louis was used as a naval base by Governor Bertrand-Francois Mahede La Bourdonnais. Due to the location of the island, before the Suez Canal, Mauritius was an important base for trade from Europe to the East and this caused a lot of conflict and battles between the French and the British.

In 1810, following the Napoleonic War, the British gained control of the island and changed its name back to Mauritius until its independence in 1968. During Britain's rule, it was used as a naval base and played an important role during WWII as well as becoming the main producing sugar colony which still remains the country's largest export and income.

Mauritius is one of the most popular tourist destinations in the world and has been recognised as the "World's Leading Island Destination" three times.

It is home to many beautiful white sand beaches (93 miles), which include, Flic en Flac, Pereybere, Tamarin, Blue Bay, and La Morne. The main attraction and most renowned of Mauritius, however, is the "Seven Coloured Earth" which are 7 different coloured sand dunes, which include the colors, red, brown, violet, green, purple, blue, and yellow. It is also considered a very safe country and only one of four countries that does not have any tension or conflict with its neighboring countries.

Glo-o-ory to thee,
Motherland, oh motherland of mine,
Sweet is thy beauty,
Sweet is thy fragrance,
around thee we gather,
as one people,
as one nation,
In peace, justice and liberty,
Beloved country may God bless thee,
for ever and ever.

We offer free images of the Mauritius Flag in four sizes (small, medium, large, and high resolution). These images are distributed royalty free for both personal and educational use and are ideal for use in projects and on websites. If you choose to use one of our images, attribution is appreciated, but not required.

The following html code snippets can be copied and pasted to add an image of the Mauritius Flag to your website: