We carry authentic Algeria Flags in both indoor and outdoor varieties. Our flags are proudly made in the United States from durable nylon and are printed with vibrant long-lasting inks. The Algeria national flag is often displayed at embassies, outside of businesses associated with Algeria, and at the homes of people who take great pride in their Algeria heritage.

Our indoor flags are finished with a pole hem and your choice of with or without golden fringe. Gold fringe is the traditional way to display an indoor flag, however, some people choose without fringe for a simple and clean look that is also less expensive. If you are looking for a complete indoor presentation set, our Build Your Own Indoor International Flag Set program allows you to select a durable nylon indoor Algeria Flag and choose between premium quality poles, bases, and ornaments, and tassel. For indoor applications, most buyers choose a 3ft. x 5ft. flag with an 8ft. pole, however, if you have a low ceiling, you may opt for a 7ft. pole, which is designed to work with drop ceilings. If you are looking for a very substantial international flag display, our 4ft. x 6ft. indoor flags can be paired with a 9ft. pole for our largest indoor display option.

Our outdoor international flags are finished with a canvas header and brass grommets and are offered in four sizes: 2ft. x 3ft., 3ft. x 5ft., 4ft. x 6ft., and 5ft. x 8ft., to fit any sized flagpole. Typically, outdoor flags are flown outside of government organizations, businesses, and institutions on in-ground and wall-mount flagpoles, however, some people also buy these flags to display their international pride at home. If you are looking for a wall-mount Algeria flag set to display outside of your home, our Build Your Own Outdoor International Flag Set program will allow you to choose between premium quality 6ft. poles and brackets to display the Algeria Flag on your front porch. Outdoor flags can also be displayed indoors on interior walls of your home with screws anchored in the wall to attach to the grommets.

In addition to the flags we offer for purchase, we maintain an archive of the audio and lyrics of the Algeria National Anthem, historical information about the Algeria flag, demographic data about Algeria, and free high resolution images of the Algeria flag for use in projects and on websites. 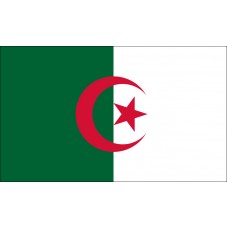 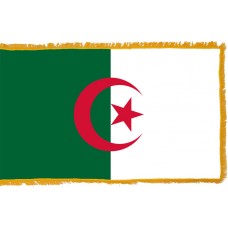 The Algerian national flag is split horizontally into two equal sections of green and white. The green color represents the green plains of Algeria, while white signifies the purity and peacefulness of the nation. A red crescent and five-pointed star are featured prominently in the center, overlapping the green and white sections. This red color represents socialism, while the crescent and five-pointed star signify Islam as the prominent religion in Algeria.

The current design of the Algerian flag was adopted on July 3, 1962, however, there are conflicting accounts of the origin of the design. One report indicates that the design was used by the National Liberation Front in 1954, and is based on a previous design from 1928 that was used by Messali Hadj, a nationalist leader. The current design was used from 1958 to 1962 as a symbol of the provisional government and was retained when the country gained their independence in 1962.

A second theory on the origin of the design purports that the design was first drafted in 1934, with the three colors signifying the predicted unification between the three countries in Northern Africa: Algeria, Morocco, and Tunisia. This theory claims that the first flag was created in 1937 by Messali El Hadj's wife and was first used in protests on July 14, 1937 in Algiers and Belcourt. A flag with the crescent and five point star star located in the upper corner of the flag was said to have been adopted and later modified to todays design in 1943.

The People's Democratic Republic of Algeria is an independent nation located in North Africa. It is situated over an area of 919,595 square miles and is comprised of 48 provinces and 1,541 counties. Algeria is the tenth largest country in the world and the largest country in Africa since South Sudan achieved independence from Sudan in 2011. The capital city and most populous city in the country is Algiers.

The most important component of Algeria's economy are natural gas exports to Europe. Algeria is home to the 16th largest oil supply in the world and it benefits from using its resources to trade military weapons with the Russians whom they are allied with most closely. Although the climate in North African is extremely hot, tourism is not popular in the country due to the the hostile environment.

We swear by the lightning that destroys,
By the streams of generous blood being shed,
By the bright flags that wave,
Flying proudly on the high mountains,
That we have risen up, and whether we live or die,
We are resolved that Algeria shall live -
So be our witness -be our witness - be our witness!

We offer free images of the Algeria Flag in four sizes (small, medium, large, and high resolution). These images are distributed royalty free for both personal and educational use and are ideal for use in projects and on websites. If you choose to use one of our images, attribution is appreciated, but not required.

The following html code snippets can be copied and pasted to add an image of the Algeria Flag to your website: