We carry authentic Switzerland Flags in both indoor and outdoor varieties. Our flags are proudly made in the United States from durable nylon and are printed with vibrant long-lasting inks. The Switzerland national flag is often displayed at embassies, outside of businesses associated with Switzerland, and at the homes of people who take great pride in their Swiss heritage.

Our indoor flags are finished with a pole hem and your choice of with or without golden fringe. Gold fringe is the traditional way to display an indoor flag, however, some people choose without fringe for a simple and clean look that is also less expensive. If you are looking for a complete indoor presentation set, our Build Your Own Indoor International Flag Set program allows you to select a durable nylon indoor Switzerland Flag and choose between premium quality poles, bases, and ornaments, and tassel. For indoor applications, most buyers choose a 3ft. x 5ft. flag with an 8ft. pole, however, if you have a low ceiling, you may opt for a 7ft. pole, which is designed to work with drop ceilings. If you are looking for a very substantial international flag display, our 4ft. x 6ft. indoor flags can be paired with a 9ft. pole for our largest indoor display option.

Our outdoor international flags are finished with a canvas header and brass grommets and are offered in four sizes: 2ft. x 3ft., 3ft. x 5ft., 4ft. x 6ft., and 5ft. x 8ft., to fit any sized flagpole. Typically, outdoor flags are flown outside of government organizations, businesses, and institutions on in-ground and wall-mount flagpoles, however, some people also buy these flags to display their international pride at home. If you are looking for a wall-mount Switzerland flag set to display outside of your home, our Build Your Own Outdoor International Flag Set program will allow you to choose between premium quality 6ft. poles and brackets to display the Switzerland Flag on your front porch. Outdoor flags can also be displayed indoors on interior walls of your home with screws anchored in the wall to attach to the grommets. 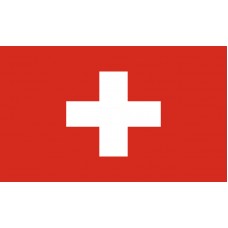 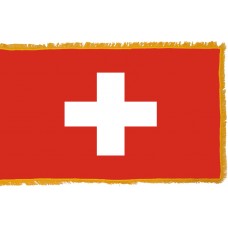 History of the Switzerland Flag

Switzerland is a landlocked country that is located in Central Europe and shares borders with Germany, Austria, Liechtenstein, France, and Italy. It is one of the smallest countries in Europe and the most mountainous as 65% of the country is covered by the Alps mountains. The capital city of Switzerland is Bern and the largest city is Zurich. Switzerland is a country that has been independent since 1499, although there was a brief period that it was occupied by France.

Switzerland is one of the richest countries in Europe and is believed to have the most stable and thriving economy. The economy mainly thrives due to manufacturing, mainly of chemicals, health, and pharmaceutical products. Tourism also contributes to the economy and Switzerland is home to many tourist attractions which include the Snowy Swiss Alps, a popular skiing destination. The most popular attraction is the "Jungfraujoch" which is also referred to as "The Top of Europe." The biggest highlight is the train trip that takes people there, as it begins from the lowest point and ends at a height of 3454 metres. It is one of Switzerland's highest peaks and the longest glacier in Europe "The Great Aletsh Glacier" begins there. Lake Geneva is also a very popular attraction and is the biggest alpine lake in Europe and home to the "Jet d'Eau" which is a famous jet fountain that shoots water 150m into the air. The capital city of Bern is home to the medieval old town which has many important landmarks, such as the tallest cathedral in Switzerland and the "Zytglogge" medieval clock tower.

Formally A Confederation But Similar In Structure To A Federal Republic

When the morning skies grow red
And o'er us their radiance shed,
Thou, O Lord, appearest in their light.
When the Alps glow bright with splendour,
Pray to God, to Him surrender,
For you feel and understand,
That He dwelleth in this land.

In the sunset Thou art night
And beyond the starry sky,
Thou, O loving Father, ever near.
When to Heaven we are departing,
Joy and bliss Thou'lt be imparting,
For we feel and understand
That Thou dwellest in this land.

When dark clouds enshroud the hills
And gray mist the valley fills,
Yet Thou art not hidden from Thy sons.
Pierce the gloom in which we cover
With Thy sunshine's cleansing power
Then we'll feel and understand
That God dwelleth in this land.

We offer free images of the Switzerland Flag in four sizes (small, medium, large, and high resolution). These images are distributed royalty free for both personal and educational use and are ideal for use in projects and on websites. If you choose to use one of our images, attribution is appreciated, but not required.

The following html code snippets can be copied and pasted to add an image of the Switzerland Flag to your website: