We carry authentic China Flags in both indoor and outdoor varieties. Our flags are proudly made in the United States from durable nylon and are printed with vibrant long-lasting inks. The China national flag is often displayed at embassies, outside of businesses associated with China, and at the homes of people who take great pride in their Chinese heritage.

Our indoor flags are finished with a pole hem and your choice of with or without golden fringe. Gold fringe is the traditional way to display an indoor flag, however, some people choose without fringe for a simple and clean look that is also less expensive. If you are looking for a complete indoor presentation set, our Build Your Own Indoor International Flag Set program allows you to select a durable nylon indoor China Flag and choose between premium quality poles, bases, and ornaments, and tassel. For indoor applications, most buyers choose a 3ft. x 5ft. flag with an 8ft. pole, however, if you have a low ceiling, you may opt for a 7ft. pole, which is designed to work with drop ceilings. If you are looking for a very substantial international flag display, our 4ft. x 6ft. indoor flags can be paired with a 9ft. pole for our largest indoor display option.

Our outdoor international flags are finished with a canvas header and brass grommets and are offered in four sizes: 2ft. x 3ft., 3ft. x 5ft., 4ft. x 6ft., and 5ft. x 8ft., to fit any sized flagpole. Typically, outdoor flags are flown outside of government organizations, businesses, and institutions on in-ground and wall-mount flagpoles, however, some people also buy these flags to display their international pride at home. If you are looking for a wall-mount China flag set to display outside of your home, our Build Your Own Outdoor International Flag Set program will allow you to choose between premium quality 6ft. poles and brackets to display the China Flag on your front porch. Outdoor flags can also be displayed indoors on interior walls of your home with screws anchored in the wall to attach to the grommets.

In addition to the flags we offer for purchase, we maintain an archive of the audio and lyrics of the China National Anthem, historical information about the China flag, demographic data about China, and free high resolution images of the China flag for use in projects and on websites. 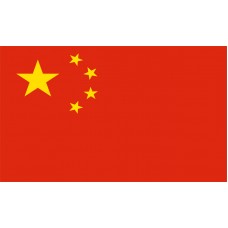 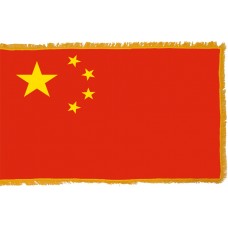 History of the Chinese Flag

The Flag of China features a vibrant red background with a large yellow 5-pointed star in the top left corner with four smaller yellow stars next to it in an arched formation. The red color of the flag represents both revolution and happiness, while the yellow color pays homage to the official color of the Manchu dynasty and represents the Chinese people as the "yellow race." The large yellow star is symbolic of communism, while the four smaller stars represent the four social classes of the Chinese people which are, working class, peasantry class, urban petty bourgeoisie, and national bourgeoisie. The 5 points on the star are symbolic of water, fire, earth, wood, and metal. The Chinese flag is often referred to as the "Five-Star red flag."

The current Chinese flag was adopted on September 27th, 1949 and was first officially flown in a ceremony that declared the people's republic on October 1st, 1949. In 1949, the Chinese government organized a contest, whereby, citizens could submit designs to be considered as the new national flag of China. The submission period was open for about a month, during which, over 3000 designs were received. A committe was created to review the designs and they unanimously selected the current design, which was created by Zeng Liansong, an economist and amatuer artist from Zhejiang, China. Liansong's flag was designed to represent China's history and culture.

China is the world's fourth largest country by land area and the largest country by population. The country is located in East Asia and shares borders with Russia, Mongolia, Kazakhstan, Kyrgyzstan, Tajikistan, Afghanistan, Pakistan, India, Bhutan, Nepal, Burma, Laos, Vietnam, and North Korea. The capital city of China is Beijing and the largest city in the country is Shanghai. China is thought to be the oldest civilization in the world, dating back to 6,000 BC. Moreover, the Chinese language is the oldest language still in use in the world today. China has long-been a very advanced civilization. At one time, the country was known as the "Land of Inventions" as the Chinese invented paper, gunpowder, silk, porcelain, printing, and the compass. It is still very advanced today, and is the second biggest economy in the world, only behind the United States.

China is home to the famous and renowned "Great Wall of China," which is 5,500 miles long ad is the most popular tourist attraction in the country, drawing thousands of visitors from all over the world visiting each year. It stretches from the Korean Border to the Gobi Desert and it is the longest wall in the world. Another popular attraction is the "Forbidden City" in Beijing, which is a palace complex where the various dynasties through history resided. The palace is now a museum.

The Chinese New Year is a very important celebration in China which lasts for two weeks each year. Many people from around the world visit China during this period to be a part of and experience the celebrations.

March of the Volunteers

We offer free images of the China Flag in four sizes (small, medium, large, and high resolution). These images are distributed royalty free for both personal and educational use and are ideal for use in projects and on websites. If you choose to use one of our images, attribution is appreciated, but not required.

The following html code snippets can be copied and pasted to add an image of the China Flag to your website: