We carry authentic Macedonia Flags in both indoor and outdoor varieties. Our flags are proudly made in the United States from durable nylon and are printed with vibrant long-lasting inks. The Macedonia national flag is often displayed at embassies, outside of businesses associated with Macedonia, and at the homes of people who take great pride in their Macedonia heritage.

Our indoor flags are finished with a pole hem and your choice of with or without golden fringe. Gold fringe is the traditional way to display an indoor flag, however, some people choose without fringe for a simple and clean look that is also less expensive. If you are looking for a complete indoor presentation set, our Build Your Own Indoor International Flag Set program allows you to select a durable nylon indoor Macedonia Flag and choose between premium quality poles, bases, and ornaments, and tassel. For indoor applications, most buyers choose a 3ft. x 5ft. flag with an 8ft. pole, however, if you have a low ceiling, you may opt for a 7ft. pole, which is designed to work with drop ceilings. If you are looking for a very substantial international flag display, our 4ft. x 6ft. indoor flags can be paired with a 9ft. pole for our largest indoor display option.

Our outdoor international flags are finished with a canvas header and brass grommets and are offered in four sizes: 2ft. x 3ft., 3ft. x 5ft., 4ft. x 6ft., and 5ft. x 8ft., to fit any sized flagpole. Typically, outdoor flags are flown outside of government organizations, businesses, and institutions on in-ground and wall-mount flagpoles, however, some people also buy these flags to display their international pride at home. If you are looking for a wall-mount Macedonia flag set to display outside of your home, our Build Your Own Outdoor International Flag Set program will allow you to choose between premium quality 6ft. poles and brackets to display the Macedonia Flag on your front porch. Outdoor flags can also be displayed indoors on interior walls of your home with screws anchored in the wall to attach to the grommets. 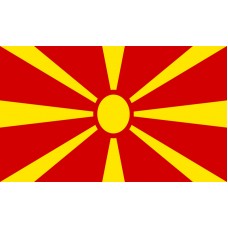 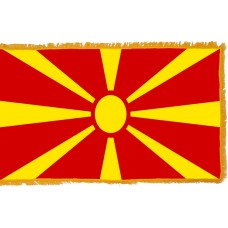 History of the Macedonian Flag

The Macedonian flag is red with a big yellow 8-ray sun with all the rays meeting the edges of the flags. The flag was adopted on October 5th, 1995. The red and yellow colors are the national colors of Macedonia and the sun on it is referred to as "The New Sun of Liberty" and represents a new beginning for Macedonia. The first Macedonia flag after their independence from Yugoslavia was adopted on August 11th, 1992 and that flag was red with a small yellow "Star of Vergina." Greece objected to their new flag as they believed the Vergina star was a Greek symbol that belonged to Greece only. Greece imposed a one-year economic blockade on Macedonia, in order to force them to change the flag. The new Macedonia flag was designed by Professor Miroslav Grcev, and it is one of the newest flags.

Macedonia is a country that has endured many revolutions and struggles to seek independence. In 1389AD, Macedonia was taken over by Turks until 1912. Between 1767-1891 they were many attempts to overthrow the Turks, to no avail. From 1912-1913, Macedonia gained victory against the Turks after being joined by Serbia, Bulgaria, and Greece. Following this, Macedonia still did not have independence and were refused it, and instead Greece took a portion of Macedonia, naming it "Northern Greece" and Serbia took another portion, naming it "Southern Serbia."

In 1918, as Serbia had already claimed a large portion of Macedonia, it then joined with Croatia, Slovenia, and Montenegro and named it Yugoslavia in 1929. During WWII, the German Nazis invaded Yugoslavia, who actually collaborated with them to exterminate the Jews. As a result of this, in 1944, Macedonia gained independence but soon lost it again after the Greek Civil War (1946-1949) and once again, became a part of Yugoslavia. In 1991, Yugoslavia crumbled, and Macedonia regained their independence.

Macedonia is a landlocked country in Europe that shares borders with Kosovo, Serbia, Bulgaria, Greece, and Albania. The capital of Macedonia is Skopje. Macdonia is mainly a mountainous country with the highest mountain being, Mount Korab. The oldest town in Macedonia is called "Ohrid" (oldest human settlement in Europe) and it is home to Lake Ohrid, which is the deepest and oldest lake in Europe and it is also home to the Church of St. Sophia which is seen as the most important monument that Macedonia has as well as the oldest Slav monastery.

A major tourist attraction that Macedonia has is the "Lake Marrovo" which has a half-submerged church in it and the cross at the top of Vodno mountain which is the 4th largest cross in the world. It was built to serve as a memorial for 2,000 years of Christianity and is referred to as the "Millenium Cross." Another major attraction is "Cave Vrelo" which is the deepest underwater cave in the world.

We offer free images of the Macedonia Flag in four sizes (small, medium, large, and high resolution). These images are distributed royalty free for both personal and educational use and are ideal for use in projects and on websites. If you choose to use one of our images, attribution is appreciated, but not required.

The following html code snippets can be copied and pasted to add an image of the Macedonia Flag to your website: