We carry authentic Chile Flags in both indoor and outdoor varieties. Our flags are proudly made in the United States from durable nylon and are printed with vibrant long-lasting inks. The Chile national flag is often displayed at embassies, outside of businesses associated with Chile, and at the homes of people who take great pride in their Chilean heritage.

Our indoor flags are finished with a pole hem and your choice of with or without golden fringe. Gold fringe is the traditional way to display an indoor flag, however, some people choose without fringe for a simple and clean look that is also less expensive. If you are looking for a complete indoor presentation set, our Build Your Own Indoor International Flag Set program allows you to select a durable nylon indoor Chile Flag and choose between premium quality poles, bases, and ornaments, and tassel. For indoor applications, most buyers choose a 3ft. x 5ft. flag with an 8ft. pole, however, if you have a low ceiling, you may opt for a 7ft. pole, which is designed to work with drop ceilings. If you are looking for a very substantial international flag display, our 4ft. x 6ft. indoor flags can be paired with a 9ft. pole for our largest indoor display option.

Our outdoor international flags are finished with a canvas header and brass grommets and are offered in four sizes: 2ft. x 3ft., 3ft. x 5ft., 4ft. x 6ft., and 5ft. x 8ft., to fit any sized flagpole. Typically, outdoor flags are flown outside of government organizations, businesses, and institutions on in-ground and wall-mount flagpoles, however, some people also buy these flags to display their international pride at home. If you are looking for a wall-mount Chile flag set to display outside of your home, our Build Your Own Outdoor International Flag Set program will allow you to choose between premium quality 6ft. poles and brackets to display the Chile Flag on your front porch. Outdoor flags can also be displayed indoors on interior walls of your home with screws anchored in the wall to attach to the grommets.

In addition to the flags we offer for purchase, we maintain an archive of the audio and lyrics of the Chile National Anthem, historical information about the Chile flag, demographic data about Chile, and free high resolution images of the Chile flag for use in projects and on websites. 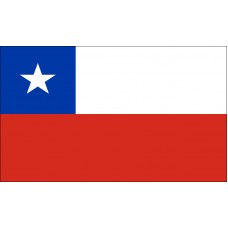 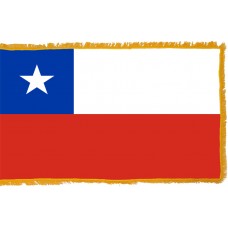 History of the Chilean Flag

The Flag of Chile features a split design with a white background on the top half and a red background on the bottom half. A blue canton that is the same height as the white half is included in the upper hoist-side corner. Inside of the blue canton is a white five-pointed star. The Chilean flag was adopted on October 18th, 1817. The blue color on the flag symbolizes the sky and the ocean, the red color is symbolic of the sacrifices the people of Chile made to gain their independence, and the white color represents the snow covered Andes mountains which occupy 80% of the country. The white star on the flag is used to represent the progress of the country and it is also thought that the one star represents the independent state. The Chilean flag was adopted when Chile gained independence from Spain.

Throughout its history, the Chilean flag has undergone many changes and amendments. In 1812, Chile raised the "Patria Vieja" flag, which translates as "Old Fatherland." This flag featured 3 horizontal bands in the colors of blue, white, and yellow. This was raised during the Chilean war of independence. Following their defeat by the Spanish in 1814, use of the flag was ceased. On May 26th, 1817, the "Bander de la Trasicion," (flag of the transition) was raised following Chile's victory at the Battle of Chacabuco. This flag consisted of 3 horizontal bands in the colors of blue, white, and red. On October 18th, 1817, the flag was changed once more to the current design but using the color of the "Bander de la Trasicion," and one star added as it had become an independent state. The star in Spanish is referred to as "La Estrella Solitaria," which translates to, "Lone Star."

Chile is located in South America between the Pacific Ocean and the Andes mountains. The country shares borders with Peru, Bolivia, Argentina, and the Drake Passage. The largest and capital city of Chile is Santiago, which is also home to the tallest skyscraper in Latin America, known as "Gran Torre de Santiago."

Chile is the longest and narrowest country in the world and is home to many famous landmarks and attractions. The Andes Mountains (the longest mountain range in the world) covers around 80% of the country and is a popular tourist destination. Another popular destination is the "Torres del Pain National Park," which is home to many beautiful lakes, mountains, hills, and glaciers and attracts over 150,000 visitors each year. The park is so large that it would take weeks to tour the whole park. Chile is also home to the famous Easter Island which contains 887 monumental statues that are known as "Maoi." Other natural attractions in Chile are the Atacama desert, which is the driest place on Earth and the "Nevado Ojos del Salado," which is the highest active volcano in the world.

We offer free images of the Chile Flag in four sizes (small, medium, large, and high resolution). These images are distributed royalty free for both personal and educational use and are ideal for use in projects and on websites. If you choose to use one of our images, attribution is appreciated, but not required.

The following html code snippets can be copied and pasted to add an image of the Chile Flag to your website: