We carry authentic Tuvalu Flags in both indoor and outdoor varieties. Our flags are proudly made in the United States from durable nylon and are printed with vibrant long-lasting inks. The Tuvalu national flag is often displayed at embassies, outside of businesses associated with Tuvalu, and at the homes of people who take great pride in their Tuvalu heritage.

Our indoor flags are finished with a pole hem and your choice of with or without golden fringe. Gold fringe is the traditional way to display an indoor flag, however, some people choose without fringe for a simple and clean look that is also less expensive. If you are looking for a complete indoor presentation set, our Build Your Own Indoor International Flag Set program allows you to select a durable nylon indoor Tuvalu Flag and choose between premium quality poles, bases, and ornaments, and tassel. For indoor applications, most buyers choose a 3ft. x 5ft. flag with an 8ft. pole, however, if you have a low ceiling, you may opt for a 7ft. pole, which is designed to work with drop ceilings. If you are looking for a very substantial international flag display, our 4ft. x 6ft. indoor flags can be paired with a 9ft. pole for our largest indoor display option.

Our outdoor international flags are finished with a canvas header and brass grommets and are offered in four sizes: 2ft. x 3ft., 3ft. x 5ft., 4ft. x 6ft., and 5ft. x 8ft., to fit any sized flagpole. Typically, outdoor flags are flown outside of government organizations, businesses, and institutions on in-ground and wall-mount flagpoles, however, some people also buy these flags to display their international pride at home. If you are looking for a wall-mount Tuvalu flag set to display outside of your home, our Build Your Own Outdoor International Flag Set program will allow you to choose between premium quality 6ft. poles and brackets to display the Tuvalu Flag on your front porch. Outdoor flags can also be displayed indoors on interior walls of your home with screws anchored in the wall to attach to the grommets.

In addition to the flags we offer for purchase, we maintain an archive of historical information about the Tuvalu flag, demographic data about Tuvalu, and free high resolution images of the Tuvalu flag for use in projects and on websites. 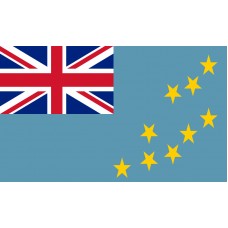 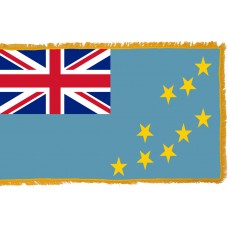 History of the Tuvalu Flag

The Tuvalu Flag features a light blue/sky blue field with the Union Jack in the top left-hand corner of the flag and nine yellow 5-pointed stars on the right-hand side of the flag. The stars on the flag represent the 9 islands of the country and the Union Jack represents the association that the country still has with Great Britain. The Tuvalu flag was adopted on October 1st, 1978 and was replaced briefly until it was re-adopted on April 4th, 1991, due to a change of government.

Tuvalu is an island country that is located in the South Pacific Ocean. Its neighboring countries are the Solomon Islands, Marshall Islands, Nauru, Kiribati, Tokelau, Samoa, and Fiji. Tuvalu is made up of three reef islands and six atolls. The reef islands are Nanumanga, Niutao, and Niulakita and the six atolls are, Funafuti, Nanumea, Nui, Nukufetau, Nukulaelae, and Vaitupu (which is the only island that has a secondary school in the country).

The capital is Funafuti which is home to 56% of the population, making it the most populated atoll. Tuvalu literally translates as "eight standing together" and was named this due to the fact that only eight of the nine islands were inhabited prior to European contact (Niulakita was uninhabited). Tuvalu is the fourth smallest country in the world and is a very low-lying country, approximately 4-5 meters above sea level. It has been predicted that within 30-50 years the islands could disappear due to the high rate that the ocean is rising.

Tuvalu was first sighted by European explorer, Alvaro de Mendana on January 16th, 1568 but it wasn't until the 1800s that the islands were officially recognized. In 1819, Funafuti was called Ellice's Islands which later became applied to all of the islands and in 1892, the Ellice islands became a British Protectorate until 1916. In 1916, the Ellice Islands were combined with the Gilbert Islands and became part of the Gilbert and Ellice Islands colony until 1974. The Ellice islands voted to separate from the Gilbert Islands due to racial tension as well as tension regarding employment and to have a separate British dependency.

The economy in Tuvalu is very strained and the country has to rely a lot on foreign aid and the importation of food and fuel as well as other goods. Tuvalu's main imports come from Fiji, Australia, New Zealand, and Japan. Its main contributor is agriculture and fishing and the export of "Copra" which is the dried flesh of coconuts that is used in making coconut oil. The other main contributor to Tuvalu's economy is the lease of its "Top Level Domain" also referred to as TLD. Tourism does not contribute at all to the economy as it is the least visited country in the world with only 1,000 tourists a year.

We offer free images of the Tuvalu Flag in four sizes (small, medium, large, and high resolution). These images are distributed royalty free for both personal and educational use and are ideal for use in projects and on websites. If you choose to use one of our images, attribution is appreciated, but not required.

The following html code snippets can be copied and pasted to add an image of the Tuvalu Flag to your website: