We carry authentic Gambia Flags in both indoor and outdoor varieties. Our flags are proudly made in the United States from durable nylon and are printed with vibrant long-lasting inks. The Gambia national flag is often displayed at embassies, outside of businesses associated with Gambia, and at the homes of people who take great pride in their Gambia heritage.

Our indoor flags are finished with a pole hem and your choice of with or without golden fringe. Gold fringe is the traditional way to display an indoor flag, however, some people choose without fringe for a simple and clean look that is also less expensive. If you are looking for a complete indoor presentation set, our Build Your Own Indoor International Flag Set program allows you to select a durable nylon indoor Gambia Flag and choose between premium quality poles, bases, and ornaments, and tassel. For indoor applications, most buyers choose a 3ft. x 5ft. flag with an 8ft. pole, however, if you have a low ceiling, you may opt for a 7ft. pole, which is designed to work with drop ceilings. If you are looking for a very substantial international flag display, our 4ft. x 6ft. indoor flags can be paired with a 9ft. pole for our largest indoor display option.

Our outdoor international flags are finished with a canvas header and brass grommets and are offered in four sizes: 2ft. x 3ft., 3ft. x 5ft., 4ft. x 6ft., and 5ft. x 8ft., to fit any sized flagpole. Typically, outdoor flags are flown outside of government organizations, businesses, and institutions on in-ground and wall-mount flagpoles, however, some people also buy these flags to display their international pride at home. If you are looking for a wall-mount Gambia flag set to display outside of your home, our Build Your Own Outdoor International Flag Set program will allow you to choose between premium quality 6ft. poles and brackets to display the Gambia Flag on your front porch. Outdoor flags can also be displayed indoors on interior walls of your home with screws anchored in the wall to attach to the grommets.

In addition to the flags we offer for purchase, we maintain an archive of the audio and lyrics of the Gambia National Anthem, historical information about the Gambia flag, demographic data about Gambia, and free high resolution images of the Gambia flag for use in projects and on websites. 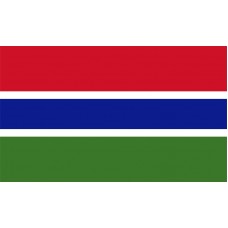 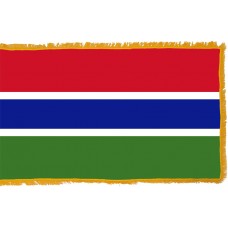 History of the Gambia Flag

The Gambia Flag features three horizontal bands in the colors of red, blue, and green which are separated by two thin white lines. The Blue color represents the Gambia sea, the red color represents the sun due to how close Gambia is to the equator, and the green color represents Gambia's forests and agriculture. The white lines on the flag represent peace, love, and unity. The Gambian flag was adopted on February 18th, 1965 when it finally reached independence and was first raised on this day at midnight. The color scheme of the Gambian flag is the same as the color scheme on its coat of arms.

In 1661, the British arrived on the island and managed to conquer James Island. By the 1820s, Gambia had become a British protectorate and in 1888 it became part of the British colony. In 1964, it was agreed between the British and Gambian delegations that Gambia would receive full independence in 1965 but the head of state would still be Elizabeth II. Following their independence, the government decided that instead of the Queen, they would choose an elected Prime Minister and on April 24th, 1970 Sir Dawda Kairaba Jawara was declared the Prime Minister and head of state.

Gambia is the smallest country in Africa. It is a long thin country that is only bordered by Senegal. The capital city of the country is Banjul and can be found on St. Mary's island. The largest cities in Gambia are "Serekunda" and "Brikama." The major river is the Gambia river, from which the country's name is derived. Gambia's economy is mainly based around farming, fishing, and tourism.

Tourism is increasing and improving in the country with a lot of tourists visiting the island for the famous sandy beaches. Another main tourist attraction in Gambia is the "Abuko Nature Reserve" which is the first wildlife reserve in Gambia which opened in 1968 and is home to Nile crocodiles, a wide variety of birds, four species of primate and reptiles along with many more animals and wildlife. The "Kachikally Crocodile Pool" is also very renowned and it is only one of three crocodile pools in the country and is home to approximately 80 crocodiles. The crocodile pools are used as sites for fertility rituals.

"Arch 22" is another popular sight that is often visited and is an arch on the road leading into Banjul that was built in 1996, paying tribute to the army Coup d'etat of July 1994. The arch is the tallest structure in Gambia and has three floors. One of the most famous sights to visit is the "Senegambian Stone Circles." These monuments are dated back between the 3rd and the 16th Century. In this area, one can see 29,000 stones, 17,000 monuments and 2,000 individual sites.

For The Gambia Our Homeland

For The Gambia, our homeland
We strive and work and pray,
That all may live in unity,
Freedom and peace each day.
Let justice guide our actions
Towards the common good,
And join our diverse peoples
To prove man's brotherhood.
We pledge our firm allegiance,
Our promise we renew;
Keep us, great God of nations,
To The Gambia ever true.

We offer free images of the Gambia Flag in four sizes (small, medium, large, and high resolution). These images are distributed royalty free for both personal and educational use and are ideal for use in projects and on websites. If you choose to use one of our images, attribution is appreciated, but not required.

The following html code snippets can be copied and pasted to add an image of the Gambia Flag to your website: