We carry authentic Cameroon Flags in both indoor and outdoor varieties. Our flags are proudly made in the United States from durable nylon and are printed with vibrant long-lasting inks. The Cameroon national flag is often displayed at embassies, outside of businesses associated with Cameroon, and at the homes of people who take great pride in their Cameroon heritage.

Our indoor flags are finished with a pole hem and your choice of with or without golden fringe. Gold fringe is the traditional way to display an indoor flag, however, some people choose without fringe for a simple and clean look that is also less expensive. If you are looking for a complete indoor presentation set, our Build Your Own Indoor International Flag Set program allows you to select a durable nylon indoor Cameroon Flag and choose between premium quality poles, bases, and ornaments, and tassel. For indoor applications, most buyers choose a 3ft. x 5ft. flag with an 8ft. pole, however, if you have a low ceiling, you may opt for a 7ft. pole, which is designed to work with drop ceilings. If you are looking for a very substantial international flag display, our 4ft. x 6ft. indoor flags can be paired with a 9ft. pole for our largest indoor display option.

Our outdoor international flags are finished with a canvas header and brass grommets and are offered in four sizes: 2ft. x 3ft., 3ft. x 5ft., 4ft. x 6ft., and 5ft. x 8ft., to fit any sized flagpole. Typically, outdoor flags are flown outside of government organizations, businesses, and institutions on in-ground and wall-mount flagpoles, however, some people also buy these flags to display their international pride at home. If you are looking for a wall-mount Cameroon flag set to display outside of your home, our Build Your Own Outdoor International Flag Set program will allow you to choose between premium quality 6ft. poles and brackets to display the Cameroon Flag on your front porch. Outdoor flags can also be displayed indoors on interior walls of your home with screws anchored in the wall to attach to the grommets. 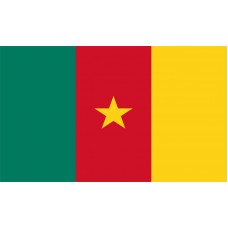 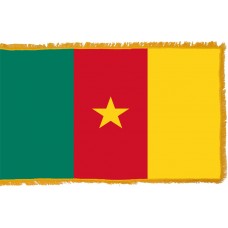 History of the Cameroon Flag

The Cameroon flag features a tricolor design with three equal-sized vertical stripes of green, red, and yellow. The central feature of the flag is a yellow 5-point star in the middle of the red stripe. The green color signifies the country's rich vegetation and aspirations for the future, the red color is symbolic of independence, and the yellow color represents the sun as well as the soil and savannas in the country. The star in the center signifies the unity of the country as it was composed of both French and English territories. The colors and sequence of the Cameroon flag were derived from the Ethiopian flag and Cameroon is the second African country that uses the Pan-African colors on the flag.

The Cameroon flag has undergone changes throughout the country's history. In 1884, Cameroon became a German Colony and used a flag comprised of 3 horizontal stripes of black, white, and red with an elephant in the center. The name of the country at this time was "Kamerun." Following World War I, in 1919, Cameroon was divided between France and Great Britain, known as the British Southern Cameroons and the French Cameroons. France ruled the East from Cameroon's capital, Yaounde and the British ruled the West from Nigeria. During this period from 1922, the flag was blue, with a Union Jack in the top left corner and a white circle on the right-hand side with British Cameroon written inside it.

In 1960, France granted independence to Cameroon and on February 20th, 1960 a new flag was raised with the green, red, and yellow stripes that is still in use today. In 1961, the British Southern Cameroons united with the French Cameroons and created a federation. Once again, the flag was changed. It kept the tricolor it adopted the year before and two golden stars were added in the green band at the top to represent the British and the French and it was known as the "Federal Republic of Cameroon." The Cameroon flag remained like this from 1961-1975 and was changed again on May 20th, 1975, when the British and French states unified and remains the same today.

Cameroon is a country in Central Africa that shares borders with Nigeria, Chad, Central African Republic, Equatorial Guinea, Gabon, Republic of Congo, and the Atlantic Ocean. It is known as one of the wettest countries on Earth due to the heavy rainfall it encounters each year. Its capital city is "Yaounde" and its largest city is "Douala." Due to its varied culture and geography, it is referred to as "The hinge of Africa" or "Miniature Africa."

Cameroon is home to many beautiful sights and landscapes including deserts, mountains, savannas, rainforests, and the best beaches in Africa. The Dja Faunal Reserve, which is surrounded by the Dja River, is one of the largest rainforests in Africa and is notable for being the best protected. Cameroon is also home to the Royal Palace of Foumban which is the oldest palace in Africa and still serves as the residence of the Sultan. Mount Cameroon, which is an active volcano and Cameroon's highest point is another attraction in the country.

O Cameroon, Cradle of Our Forefathers

O Cameroon, Thou Cradle of our Fathers, Holy Shrine where in our midst they now repose, Their tears and blood and sweat thy soil did water, On thy hills and valleys once their tillage rose. Dear Fatherland, thy worth no tongue can tell! How can we ever pay thy due? Thy welfare we will win in toil and love and peace, Will be to thy name ever true!

Land of Promise, land of Glory! Thou, of life and joy, our only store! Thine be honour, thine devotion, And deep endearment, for evermore.

From Shari, from where the Mungo meanders From along the banks of lowly Boumba Stream, Muster thy sons in union close around thee, Mighty as the Buea Mountain be their team; Instil in them the love of gentle ways, Regret for errors of the past; Foster, for Mother Africa, a loyalty That true shall remain to the last.

We offer free images of the Cameroon Flag in four sizes (small, medium, large, and high resolution). These images are distributed royalty free for both personal and educational use and are ideal for use in projects and on websites. If you choose to use one of our images, attribution is appreciated, but not required.

The following html code snippets can be copied and pasted to add an image of the Cameroon Flag to your website: