Our indoor flags are finished with a pole hem and your choice of with or without golden fringe. Gold fringe is the traditional way to display an indoor flag, however, some people choose without fringe for a simple and clean look that is also less expensive. If you are looking for a complete indoor presentation set, our Build Your Own Indoor International Flag Set program allows you to select a durable nylon indoor Northern Marianas Islands Flag and choose between premium quality poles, bases, and ornaments, and tassel. For indoor applications, most buyers choose a 3ft. x 5ft. flag with an 8ft. pole, however, if you have a low ceiling, you may opt for a 7ft. pole, which is designed to work with drop ceilings. If you are looking for a very substantial international flag display, our 4ft. x 6ft. indoor flags can be paired with a 9ft. pole for our largest indoor display option.

Our outdoor international flags are finished with a canvas header and brass grommets and are offered in four sizes: 2ft. x 3ft., 3ft. x 5ft., 4ft. x 6ft., and 5ft. x 8ft., to fit any sized flagpole. Typically, outdoor flags are flown outside of government organizations, businesses, and institutions on in-ground and wall-mount flagpoles, however, some people also buy these flags to display their international pride at home. If you are looking for a wall-mount Northern Marianas Islands flag set to display outside of your home, our Build Your Own Outdoor International Flag Set program will allow you to choose between premium quality 6ft. poles and brackets to display the Northern Marianas Islands Flag on your front porch. Outdoor flags can also be displayed indoors on interior walls of your home with screws anchored in the wall to attach to the grommets. 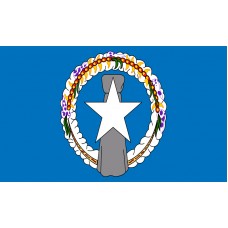 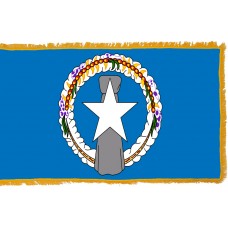 The Northern Mariana Islands are a string of islands (or archipelago) that are located in the North Pacific Ocean and are bordered by Taiwan, Japan, Marshall Islands, Micronesia, Indonesia, Guam, Papa New Guinea, and the Philippines. The capital is the island of Saipan. The Northern Mariana Islands are a commonwealth of the USA which means that the USA supports the country and provides military protection for it. The Northern islands mainly consist of volcanos, some of which are still active, and the southern islands are made of limestone. The most Southern island and largest, is the island of Guam.

It is thought that the first people to settle the island were the Chamorros who arrived between 4,000-2,000 B.C. The first European to arrive to the islands was Portuguese explorer, Ferdinand Magellan, who arrived on the island of Guam in 1521. Ferdinand Magellan then proceeded to claim the islands for Spain. Three days after arriving on the island, Magellan left following a clash with the native Chamorros, as they took his boat. Magellan did not understand the culture and their beliefs that little property of the natives was actually private and if someone took something that they needed, for example, a boat to go fishing etc. then it was not considered as stealing.

The Spanish fought with the Chamorros until they retrieved the boat and Ferdinand Magellan referred to the islands as "Las Islas de Los Ladrones" which translates as "The islands of the thieves." The Spanish, following Magellan's visit, made the islands theirs and in 1565, they became part of the Spanish West Indies and in 1668, their name was changed from the islands of the thieves to "Las Marianas" which was after Queen Mariana, who was the mother of Charles II of Spain. Over the years, the population began to decrease as the majority of natives (approximately 90%-95%) had either died or married non-Chamorro occupiers. To repopulate the country, settlers from the Philippines and Caroline Islands (Carolinians) were brought to the islands.

In 1898, following the Spanish-American war, Spain surrendered Guam to the USA and sold the remaining islands of the Marianas, including the Caroline Islands, to Germany. Germany then made the islands part of the colony, German New Guinea. In 1919, after Japan invaded the Norther Marianas and declared war on Germany, and as a result of their victory, all of the islands were given to Japan. During the period that the Northern Mariana Islands were under Japanese ruling, a large amount of Japanese migrated here. During WWII, the islands were a major battling point between Japan and USA and following Japan’s defeat, the Northern Mariana Islands would then be administered by the USA.

We offer free images of the Northern Marianas Islands Flag in four sizes (small, medium, large, and high resolution). These images are distributed royalty free for both personal and educational use and are ideal for use in projects and on websites. If you choose to use one of our images, attribution is appreciated, but not required.

Add the Northern Marianas Islands Flag to your Website:

The following html code snippets can be copied and pasted to add an image of the Northern Marianas Islands Flag to your website: