We carry authentic Seychelles Flags in both indoor and outdoor varieties. Our flags are proudly made in the United States from durable nylon and are printed with vibrant long-lasting inks. The Seychelles national flag is often displayed at embassies, outside of businesses associated with Seychelles, and at the homes of people who take great pride in their Seychelles heritage.

Our indoor flags are finished with a pole hem and your choice of with or without golden fringe. Gold fringe is the traditional way to display an indoor flag, however, some people choose without fringe for a simple and clean look that is also less expensive. If you are looking for a complete indoor presentation set, our Build Your Own Indoor International Flag Set program allows you to select a durable nylon indoor Seychelles Flag and choose between premium quality poles, bases, and ornaments, and tassel. For indoor applications, most buyers choose a 3ft. x 5ft. flag with an 8ft. pole, however, if you have a low ceiling, you may opt for a 7ft. pole, which is designed to work with drop ceilings. If you are looking for a very substantial international flag display, our 4ft. x 6ft. indoor flags can be paired with a 9ft. pole for our largest indoor display option.

Our outdoor international flags are finished with a canvas header and brass grommets and are offered in four sizes: 2ft. x 3ft., 3ft. x 5ft., 4ft. x 6ft., and 5ft. x 8ft., to fit any sized flagpole. Typically, outdoor flags are flown outside of government organizations, businesses, and institutions on in-ground and wall-mount flagpoles, however, some people also buy these flags to display their international pride at home. If you are looking for a wall-mount Seychelles flag set to display outside of your home, our Build Your Own Outdoor International Flag Set program will allow you to choose between premium quality 6ft. poles and brackets to display the Seychelles Flag on your front porch. Outdoor flags can also be displayed indoors on interior walls of your home with screws anchored in the wall to attach to the grommets. 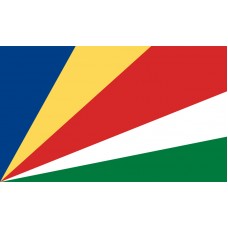 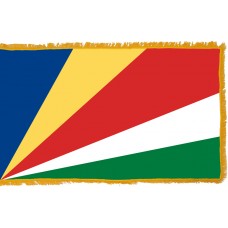 History of the Seychelles Flag

The Seychelles flag was adopted on January 8th, 1996 and since gaining independence in 1976, the current flag is the 3rd flag that has been used. The first flag that was used since gaining independence was a flag that featured alternating blue and red triangles. In 1977, after the President was overthrown the old flag was removed and a red, white, and green flag was introduced that was based on the flag of the Seychelles People's United Party.

The Seychelles is an island country that is located in the Indian Ocean on the African continent. It was named after Jean Moreau de Sechelles, who was King Louis XV minister of finance. It is a country that consists of approximately 155 islands (the majority of them are uninhabited). The capital of the Seychelles is called Victoria and is the smallest capital in the world. The largest island is called Mahe, and the island of Praslin is the second largest. The Seychelles has two regions that are known as, "The Granitic Islands" and the "Coral Islands." These are the world's only islands that are formed of granite rock and they are also the world's oldest ocean islands.

For thousands of years, the islands were uninhabited and the first sighting of them happened in 1502 by the Admiral Vasco Da Gama. The first people who arrived on the island were Captain Alexander Sharpeigh's crew, known as the "The Ascension" who arrived during their fourth voyage of British East India Company. In 1756, the French began to take control of the island when a "stone of possession" was laid on the island of Mahe by Captain Nicholas Morphey. In 1794, the British took control of the islands when Jean Baptiste Queaue Quincy negotiated the country's status and eventually they gained full control in 1810. In 1976, Seychelles gained independence as a Republic.

The Seychelles economy is mainly reliant on tourism and fishing. It has become a very popular tourist destination with many attractions on the various islands. The island of Praslin is very popular amongst tourists due to the beaches, Bird Island is home to the heaviest living tortoise in the wild and Moyenne Island is believed to have buried treasure but is also believed to be haunted, which is why no one approaches it.

Join together all Seychellois (Koste Seselwa)

Seychelles our only motherland
Where we live in harmony
Happiness, love and peace
We give thanks to God.

Preserve the beauty of our country
The riches of our oceans
A precious heritage
For the happiness of our children.

Live forever in unity
Raise our flag
Together for all eternity
Join together all Seychelles.

We offer free images of the Seychelles Flag in four sizes (small, medium, large, and high resolution). These images are distributed royalty free for both personal and educational use and are ideal for use in projects and on websites. If you choose to use one of our images, attribution is appreciated, but not required.

The following html code snippets can be copied and pasted to add an image of the Seychelles Flag to your website: