We carry authentic Ireland Flags in both indoor and outdoor varieties. Our flags are proudly made in the United States from durable nylon and are printed with vibrant long-lasting inks. The Ireland national flag is often displayed at embassies, outside of businesses associated with Ireland, and at the homes of people who take great pride in their Irish heritage.

Our indoor flags are finished with a pole hem and your choice of with or without golden fringe. Gold fringe is the traditional way to display an indoor flag, however, some people choose without fringe for a simple and clean look that is also less expensive. If you are looking for a complete indoor presentation set, our Build Your Own Indoor International Flag Set program allows you to select a durable nylon indoor Ireland Flag and choose between premium quality poles, bases, and ornaments, and tassel. For indoor applications, most buyers choose a 3ft. x 5ft. flag with an 8ft. pole, however, if you have a low ceiling, you may opt for a 7ft. pole, which is designed to work with drop ceilings. If you are looking for a very substantial international flag display, our 4ft. x 6ft. indoor flags can be paired with a 9ft. pole for our largest indoor display option.

Our outdoor international flags are finished with a canvas header and brass grommets and are offered in four sizes: 2ft. x 3ft., 3ft. x 5ft., 4ft. x 6ft., and 5ft. x 8ft., to fit any sized flagpole. Typically, outdoor flags are flown outside of government organizations, businesses, and institutions on in-ground and wall-mount flagpoles, however, some people also buy these flags to display their international pride at home. If you are looking for a wall-mount Ireland flag set to display outside of your home, our Build Your Own Outdoor International Flag Set program will allow you to choose between premium quality 6ft. poles and brackets to display the Ireland Flag on your front porch. Outdoor flags can also be displayed indoors on interior walls of your home with screws anchored in the wall to attach to the grommets.

In addition to the flags we offer for purchase, we maintain an archive of the audio and lyrics of the Ireland National Anthem, historical information about the Ireland flag, demographic data about Ireland, and free high resolution images of the Ireland flag for use in projects and on websites. 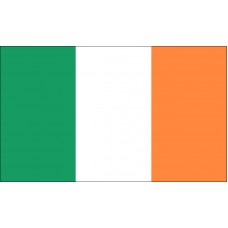 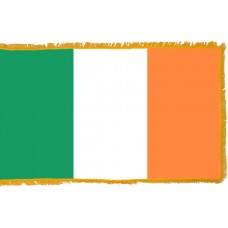 History of the Ireland Flag

It was first flown by a man named Thomas Francis Meagher who was a leader of the young Irelanders. Meagher was keen to create a "New Ireland" where the Catholics and the Protestants would unite in their fight for independence against the British. Following the 1848 revolution in Paris, Berlin, Vienna, Rome, Prague, and Budapest, Thomas Meagher, William Smith O'Brien and Richard O'Gorman went to congratulate the French on defeating King Louis Phillippe. Meagher found his inspiration from the Revolution to defeat the British Rule.

While in France, a group of French women created the Irish Tricolor and presented it to Meagher who then proceeded to present it to the Irish Citizens whilst stating, "The White in the center signifies a lasting truce between the orange and the green and I trust that beneath its folds the hands of Irish Protestants and Irish Catholics, may they be clasped in generous and heroic brotherhood." The Irish Flag was first regarded as a national flag in 1916 when it was raised above Dublin's General Post Office by Gearoid O'Sullivan but was not officially adopted until 1921.

Ireland is an island in Europe and in Irish, is referred to as "Eire." It is divided into two areas, which are Northern Ireland, which is part of the United Kingdom and Southern Ireland which covers approximately 85% of the total area. The capital city of Ireland is Dublin. Ireland is also referred to as the "Emerald Isle" due to its lush greenery.

Ireland has been a target for many invasions throughout the years, mainly due to its location. In 1168, the British invaded by taking lands and made changes in the politics which created a lot of friction and conflict between the British and Irish. In 1495, during the rule of Henry VII, the British took control of the Irish Parliament and made an attempt to ruin the Roman Catholic Churches.

By 1660, during Queen Elizabeth's reign all the lands were taken from the Irish and claimed by the British. The British governed Ireland until 1690, when they were defeated by Ireland and Ireland began to claim back what was theirs. They signed a treaty with London, which was rejected by Irish Protestants in Parliament. In 1801, the Irish Parliament was overthrown and Ireland became part of a new "United Kingdom of Great Britain and Ireland" until it sought its independence in 1922, following the Irish war of independence.

Soldiers are we,
whose lives are pledged to Ireland,
Some have come
from a land beyond the wave,
Sworn to be free,
no more our ancient sireland,
Shall shelter the despot or the slave.
Tonight we man the "bearna baoil",
In Erin's cause, come woe or weal,
'Mid cannon's roar and rifles' peal,
We'll chant a soldier's song

We offer free images of the Ireland Flag in four sizes (small, medium, large, and high resolution). These images are distributed royalty free for both personal and educational use and are ideal for use in projects and on websites. If you choose to use one of our images, attribution is appreciated, but not required.

The following html code snippets can be copied and pasted to add an image of the Ireland Flag to your website: