We carry authentic Malaysia Flags in both indoor and outdoor varieties. Our flags are proudly made in the United States from durable nylon and are printed with vibrant long-lasting inks. The Malaysia national flag is often displayed at embassies, outside of businesses associated with Malaysia, and at the homes of people who take great pride in their Malaysian heritage.

Our indoor flags are finished with a pole hem and your choice of with or without golden fringe. Gold fringe is the traditional way to display an indoor flag, however, some people choose without fringe for a simple and clean look that is also less expensive. If you are looking for a complete indoor presentation set, our Build Your Own Indoor International Flag Set program allows you to select a durable nylon indoor Malaysia Flag and choose between premium quality poles, bases, and ornaments, and tassel. For indoor applications, most buyers choose a 3ft. x 5ft. flag with an 8ft. pole, however, if you have a low ceiling, you may opt for a 7ft. pole, which is designed to work with drop ceilings. If you are looking for a very substantial international flag display, our 4ft. x 6ft. indoor flags can be paired with a 9ft. pole for our largest indoor display option.

Our outdoor international flags are finished with a canvas header and brass grommets and are offered in four sizes: 2ft. x 3ft., 3ft. x 5ft., 4ft. x 6ft., and 5ft. x 8ft., to fit any sized flagpole. Typically, outdoor flags are flown outside of government organizations, businesses, and institutions on in-ground and wall-mount flagpoles, however, some people also buy these flags to display their international pride at home. If you are looking for a wall-mount Malaysia flag set to display outside of your home, our Build Your Own Outdoor International Flag Set program will allow you to choose between premium quality 6ft. poles and brackets to display the Malaysia Flag on your front porch. Outdoor flags can also be displayed indoors on interior walls of your home with screws anchored in the wall to attach to the grommets. 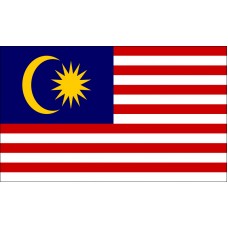 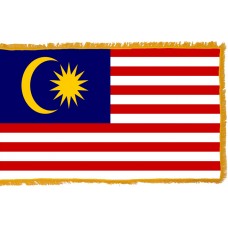 History of the Malaysian Flag

The Malaysia flag features 14 red and white stripes with a dark blue rectangle in the top left-hand corner that has a yellow crescent and a yellow 14-point star (which is known as "Bintang Persekutuan" – The Federal Star). The 14 stripes represent the 13-member states (formerly 14) and their equality and the 14 points on the star represents the unity between these states. The crescent represents Islam (the main religion) and the yellow color used for both the crescent and the sun is the royal color of the rulers. The blue rectangle also represents the unity.

The design of the Malaysia flag was heavily influenced by the USA flag. The original Malaysia flag was adopted on May 26th, 1950 and was the same as the present one except it had 11 stripes instead of 14, and the star on it had 11 points. In 1947, a competition was held to create the new national flag. After 373 entries were received, architect Mohamed Hamzah's design was chosen. The star on the flag that he designed, however, only had 5 points and was changed following independence fighter, Dato' Onn Jaafar's suggestion to change it to 11 points to represent the states.

On September 16th, 1963, the present flag was adopted to honour Singapore, Sarawak, and North Borneo joining the federation, making 14 states. It was after this that the new nation was named Malaysia. Even though Singapore left the federation, the Malaysia flag remained the same. In 1997, the Malaysian flag was finally named, "Jallur Gemilang" which translates as "Stripes of Glory."

Malaysia is located in Southeast Asia and shares borders with Thailand, Indonesia, and Brunei. It is linked to Singapore via a bridge. The capital city is called Kuala Lumpur, which is also the largest city in the country.

The country is divided into two parts. East Malaysia is on the northern part of Borneo and the mainland is on the Malay Peninsula. When it was first colonised by Portugal, and then by Britain, the country was called "Malaya," but after gaining independence from the UK, it became the "Federation of Malaya" until 1963 when the three states joined, and it was changed to Malaysia. Every year, National Day is celebrated on August 31st and is referred to as "Hari Merdeka," which translates as "Day of Freedom" to honour their independence.

Malaysia is home to some beautiful sights and greenery, which include the "Taman Negra" which is one of the oldest rainforests in the world. It is also home to the largest cave chamber in the world, known as "Sarawak Chamber" and is located in the Gunung Mulu National Park in the city of Sarawak. The "Petronas Towers" are twin skyscrapers located in Kuala Lumpur that were the world's tallest buildings between 1998-2004 but remain very monumental buildings to the people of Malaysia.

We offer free images of the Malaysia Flag in four sizes (small, medium, large, and high resolution). These images are distributed royalty free for both personal and educational use and are ideal for use in projects and on websites. If you choose to use one of our images, attribution is appreciated, but not required.

The following html code snippets can be copied and pasted to add an image of the Malaysia Flag to your website: