We carry authentic Norway Flags in both indoor and outdoor varieties. Our flags are proudly made in the United States from durable nylon and are printed with vibrant long-lasting inks. The Norway national flag is often displayed at embassies, outside of businesses associated with Norway, and at the homes of people who take great pride in their Norwegian heritage.

Our indoor flags are finished with a pole hem and your choice of with or without golden fringe. Gold fringe is the traditional way to display an indoor flag, however, some people choose without fringe for a simple and clean look that is also less expensive. If you are looking for a complete indoor presentation set, our Build Your Own Indoor International Flag Set program allows you to select a durable nylon indoor Norway Flag and choose between premium quality poles, bases, and ornaments, and tassel. For indoor applications, most buyers choose a 3ft. x 5ft. flag with an 8ft. pole, however, if you have a low ceiling, you may opt for a 7ft. pole, which is designed to work with drop ceilings. If you are looking for a very substantial international flag display, our 4ft. x 6ft. indoor flags can be paired with a 9ft. pole for our largest indoor display option.

Our outdoor international flags are finished with a canvas header and brass grommets and are offered in four sizes: 2ft. x 3ft., 3ft. x 5ft., 4ft. x 6ft., and 5ft. x 8ft., to fit any sized flagpole. Typically, outdoor flags are flown outside of government organizations, businesses, and institutions on in-ground and wall-mount flagpoles, however, some people also buy these flags to display their international pride at home. If you are looking for a wall-mount Norway flag set to display outside of your home, our Build Your Own Outdoor International Flag Set program will allow you to choose between premium quality 6ft. poles and brackets to display the Norway Flag on your front porch. Outdoor flags can also be displayed indoors on interior walls of your home with screws anchored in the wall to attach to the grommets.

In addition to the flags we offer for purchase, we maintain an archive of the audio and lyrics of the Norway National Anthem, historical information about the Norway flag, demographic data about Norway, and free high resolution images of the Norway flag for use in projects and on websites. 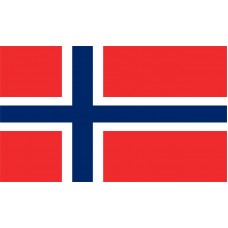 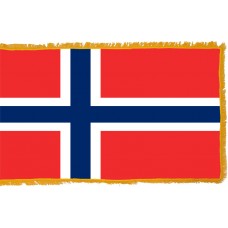 History of the Norway Flag

The Norway Flag is red and features an indigo Scandinavian cross with a white border that reaches to the edges of the flag. The vertical part of the cross is not positioned in the center of the flag but more towards the left side of it. The red, white, and blue colors were influenced from the French flag (French Tricolour) and they are a symbol of freedom and liberty. The red and white colors represent Norway's union with Denmark and the blue color represents Norway's union with Sweden. The blue cross is Scandinavian and it represents Christianity. The Norway Flag was adopted on July 17th, 1821, while Norway was still in a union with Sweden.

Norway (which is officially known as "Kongeriket Norge" – Kingdom of Norway) is a Scandinavian country that is located in Northern Europe and shares borders with Russia, Finland, Sweden, and the North Sea. Its capital city and largest city is called Oslo. It is a country that features so much beautiful scenery and landscapes and is home to some of the largest fjords, which include, "Sognefjorden" which is the largest fjord in Norway and the 3rd largest Fjord in the world. It is a country that is very popular for skiing during the winter months and the majority of tourists that visit in the summer are mainly visiting to see the Northern Lights (Aurora Borealis).

The early 14th Century was considered to be Norway's Golden Age due to the increase in trading with other countries and the peace within the country. In 1349, however, the bubonic plague (black death) invaded Norway, killing a third of its population. This had a huge effect on the country, wiping out some communities and reducing the country's economy as well as weakening the King's position due to the reduction in tax income. As a result, in 1380, Olaf Haakonsson acquired both the Norway throne as well as the Denmark throne and created the union between Denmark and Norway, which caused many conflicts and battles. In 1397, the Kalmar union was formed between Norway, Denmark, and Sweden. Norway was the weaker nation and played a minor role until Sweden declared its independence from the union in 1520, resulting in the formation of the Denmark-Norway nation.

During the 17th Century, Sweden and Denmark were warring, but Norway's economy continued to prosper due to the timber trade and in 1813, the movement for Norwegian independence began. On May 17th, 1814, a constitution was formed in Norway and May 17th is celebrated every year as "Norwegian Constitution Day." A few weeks after the constitution, Sweden invaded Norway and Norway had to agree to Swedish rule which existed until Norway gained independence in 1905. As a result of the Swedish rule, many Norwegians decided to emigrate and by 1930, approximately 800,000 people had left the country.

Yes, we love with fond devotion
This our land that looms
Rugged, storm-scarred o'er the ocean
With her thousand homes.
Love her, in our love recalling
Those who gave us birth.
And old tales which night, in falling,
Brings as dreams to earth.

Norsemen whatsoe'er thy station,
Thank thy God whose power
willed and wrought the land's salvation
In her darkest hour.
All our mothers sought with weeping
And our sires in fight,
God has fashioned in His keeping
Till we gained our right.

Yes, we love with fond devotion
This our land that looms
Rugged, storm-scarred o'er the ocean
With her thousand homes.
And, as warrior sires have made her
Wealth and fame increase,
At the call we too will aid her
Armed to guard her peace.

We offer free images of the Norway Flag in four sizes (small, medium, large, and high resolution). These images are distributed royalty free for both personal and educational use and are ideal for use in projects and on websites. If you choose to use one of our images, attribution is appreciated, but not required.

The following html code snippets can be copied and pasted to add an image of the Norway Flag to your website: