We carry authentic Tunisia Flags in both indoor and outdoor varieties. Our flags are proudly made in the United States from durable nylon and are printed with vibrant long-lasting inks. The Tunisia national flag is often displayed at embassies, outside of businesses associated with Tunisia, and at the homes of people who take great pride in their Tunisian heritage.

Our indoor flags are finished with a pole hem and your choice of with or without golden fringe. Gold fringe is the traditional way to display an indoor flag, however, some people choose without fringe for a simple and clean look that is also less expensive. If you are looking for a complete indoor presentation set, our Build Your Own Indoor International Flag Set program allows you to select a durable nylon indoor Tunisia Flag and choose between premium quality poles, bases, and ornaments, and tassel. For indoor applications, most buyers choose a 3ft. x 5ft. flag with an 8ft. pole, however, if you have a low ceiling, you may opt for a 7ft. pole, which is designed to work with drop ceilings. If you are looking for a very substantial international flag display, our 4ft. x 6ft. indoor flags can be paired with a 9ft. pole for our largest indoor display option.

Our outdoor international flags are finished with a canvas header and brass grommets and are offered in four sizes: 2ft. x 3ft., 3ft. x 5ft., 4ft. x 6ft., and 5ft. x 8ft., to fit any sized flagpole. Typically, outdoor flags are flown outside of government organizations, businesses, and institutions on in-ground and wall-mount flagpoles, however, some people also buy these flags to display their international pride at home. If you are looking for a wall-mount Tunisia flag set to display outside of your home, our Build Your Own Outdoor International Flag Set program will allow you to choose between premium quality 6ft. poles and brackets to display the Tunisia Flag on your front porch. Outdoor flags can also be displayed indoors on interior walls of your home with screws anchored in the wall to attach to the grommets.

In addition to the flags we offer for purchase, we maintain an archive of the audio and lyrics of the Tunisia National Anthem, historical information about the Tunisia flag, demographic data about Tunisia, and free high resolution images of the Tunisia flag for use in projects and on websites. 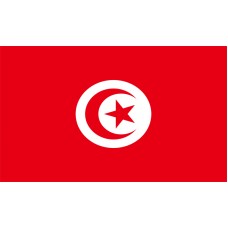 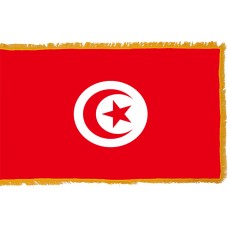 History of the Tunisian Flag

Red is also the traditional color of Islam and it symbolizes the resistance against the Turkish supremacy. The white color represents peace and the 5-pointed star and crescent of the Tunisia flag as well as being a symbol of good luck, they represent the unity of all the Muslims and the five pillars of Islam. The disc in the center represents "the radiance of the nation as the sun." The Tunisia flag was officially adopted as a national flag in 1959 but was adopted as the naval sign of the Kingdom of Tunis in 1831, which makes it one of the world's oldest flags.

Tunisia is a country in Africa (the smallest country) and shares borders with Algeria, Libya, and the Mediterranean Sea. The largest and capital city is called Tunis (which is where Tunisia’s name originated from). In the 8th Century BC, the Phoenicians founded Carthage in Tunisia that fought with Rome from 264BC until their defeat in 146BC. Following the Roman's victory, Tunisia became a Roman Province for over 500 years. In 697, the whole of Tunisia was conquered by Arabs and was later ruled by the Ottoman Empire for over 300 years. In 1881, Tunisia was invaded by France and officially became a protectorate of France on May 12th, 1881. Tunisia remained a French Protectorate until it gained independence in 1956.

The majority of Tunisia's economy relies on agriculture, mining, and tourism. Tunisia attracts approximately 7 million tourists a year which makes it one of Africa’s most visited countries. Tunisia is home to many old and historical attractions as well as home to some of the most beautiful beaches in the Mediterranean. One of its most popular attractions is the "Amphitheatre of El Djem" which was built in 238AD when Tunisia was part of the Roman Province of Africa. It is considered to be one of the most well-preserved ruins in the world as well as being one of the biggest amphitheaters in the world.

The "Baths of Antoninus" are the largest Roman Thermae (baths) that were built on the continent and one of the largest three in the whole Roman Empire that are another of Tunisia's most famous landmarks. Another main attraction is the "Medina of Tunis" that is located in Tunisia's capital city and contains 700 monuments that include palaces, mosques, museums, and fountains. The capital city Tunis is also home to the "Bardo National Museum" which is thought to be one of the most significant museums in the Mediterranean basin and is also the second largest museum in Africa and displays Tunisia’s diverse history through the many civilizations.

O defenders of the Nation, hasten to the meeting of glory!
We are ready to die, if it is necessary, die so that our country will live!
This our blood in our veins urges us.

There is nobody in our country who refuses to be in the ranks of its soldiers!
We are bound together by our oath of fidelity.
We will live on her soil in dignity
or we will die, for her, in glory.

Be master of your destiny, o my country, and be happy!
Because it is not worth to live without being master of your sovereignty
My boiling blood and all the wealth I possess,
I am ready to sacrifice it for my country and my people.
Glory to you, Tunisia! Greatness of your people, remain forever proud!
Look at your children launching out, such as lions,
In assault on the enemy on the day of the battle

Our heritage, among the nations, is the strength of our arms,
the arms as hard as the rock of these imposing buildings
And which hold high the banner of the country.
This banner makes us proud, and it is proud to be carried by us.
Arms that bring us towards the highest tops
Of glory and greatness
And which guarantee the realization of our ambitions
Which will bring misfortune to the enemies of our Fatherland
But who are peaceful with all those who want peace.

When the people wants to live, destiny must surely respond
Darkness will disappear, chains will certainly break!

We offer free images of the Tunisia Flag in four sizes (small, medium, large, and high resolution). These images are distributed royalty free for both personal and educational use and are ideal for use in projects and on websites. If you choose to use one of our images, attribution is appreciated, but not required.

The following html code snippets can be copied and pasted to add an image of the Tunisia Flag to your website: