We carry authentic Turkey Flags in both indoor and outdoor varieties. Our flags are proudly made in the United States from durable nylon and are printed with vibrant long-lasting inks. The Turkey national flag is often displayed at embassies, outside of businesses associated with Turkey, and at the homes of people who take great pride in their Turkish heritage.

Our indoor flags are finished with a pole hem and your choice of with or without golden fringe. Gold fringe is the traditional way to display an indoor flag, however, some people choose without fringe for a simple and clean look that is also less expensive. If you are looking for a complete indoor presentation set, our Build Your Own Indoor International Flag Set program allows you to select a durable nylon indoor Turkey Flag and choose between premium quality poles, bases, and ornaments, and tassel. For indoor applications, most buyers choose a 3ft. x 5ft. flag with an 8ft. pole, however, if you have a low ceiling, you may opt for a 7ft. pole, which is designed to work with drop ceilings. If you are looking for a very substantial international flag display, our 4ft. x 6ft. indoor flags can be paired with a 9ft. pole for our largest indoor display option.

Our outdoor international flags are finished with a canvas header and brass grommets and are offered in four sizes: 2ft. x 3ft., 3ft. x 5ft., 4ft. x 6ft., and 5ft. x 8ft., to fit any sized flagpole. Typically, outdoor flags are flown outside of government organizations, businesses, and institutions on in-ground and wall-mount flagpoles, however, some people also buy these flags to display their international pride at home. If you are looking for a wall-mount Turkey flag set to display outside of your home, our Build Your Own Outdoor International Flag Set program will allow you to choose between premium quality 6ft. poles and brackets to display the Turkey Flag on your front porch. Outdoor flags can also be displayed indoors on interior walls of your home with screws anchored in the wall to attach to the grommets.

In addition to the flags we offer for purchase, we maintain an archive of the audio and lyrics of the Turkey National Anthem, historical information about the Turkey flag, demographic data about Turkey, and free high resolution images of the Turkey flag for use in projects and on websites. 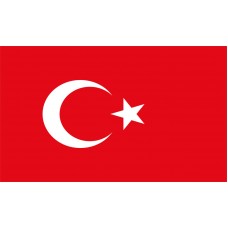 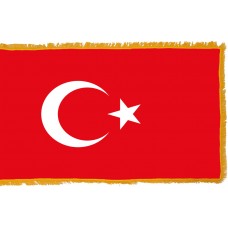 History of the Turkish Flag

The Turkey Flag features a red field with a 5-pointed white star and a crescent towards the left-hand side of the flag. The color red represents the blood shed by Turkey's soldiers and the white color represents the peace. The crescent and star are a symbol of Islam. It is thought that the Turkey flag represents "the reflection of the moon and star in a pool of blood of Turkish warriors." The Turkey flag is also referred to as "Al Bayrak" which translates as the "Red Flag" or "Al Sancak" which translates as the red banner and is mentioned in Turkey's national anthem. The Turkey flag has been derived from the Ottoman Flag (adopted in 1844) and was adopted on June 5th, 1936.

Turkey is a transcontinental country (a country that is located on more than one continent) in Eurasia (land that combines the continents Europe and Asia) but 97% of Turkey's land lies in Asia. It shares borders with Armenia, Azerbaijan, Iran, Iraq, Syria, Bulgaria, Greece, and Georgia. The capital city is called Ankara and the largest city is called Istanbul. Anatolia (the Asian part of Turkey) is one of the oldest settled regions in the world.

Turkey is a country that has had many civilizations throughout history, such as the Hittites, Roman Empire, Mongol Empire, Byzantine Empire, and the Ottoman Empire. The largest city, Istanbul, was the capital of three of these Empires (Roman, Byzantine, and Ottoman) for approximately 2000 years. Following the breakdown of the Mongol Empire, the Ottoman Empire was built during the 14th century. The Ottoman Empire ruled other countries across Europe and is the longest Empire that existed. The breakdown of this Empire came during World War I when it was part of the central powers (opposition of the Allied Powers) and 500,000 Armenians were killed during the American Genocide. Following the empire's destruction, modern-day Turkey was formed in 1923.

A lot of Turkey’s economy is based around manufacturing, such as cars, planes, electronics and clothing. Tourism as well plays a major role and Turkey is known to be a very popular tourist destination due to its beaches and historical sites and monuments. One of Turkey's most well-known destinations is Istanbul's Grand Bazaar which is one of oldest (as well as biggest) malls in the world that dates back to 1455.

The current mall now consists of 61 streets that are home to 3,000 shops and have between 300,000-400,000 visitors a day. Istanbul is also home to the "Sulemaniye Mosque" which is the largest mosque in the city that was completed in 1558. The "Hagia Sophia" which is also known as the "Church of the Holy Wisdom" or "Church of the Divine" is one of the greatest monuments in the world that was erected during the Byzantine Empire during the 16th century under the rule of Justinian I. The "Pamukkale," also known as the "Cotton Castle" is a location on a hillside that features hot springs and has been used as a spa for centuries and is a destination popular amongst tourists.

Fear not! For the crimson flag that proudly ripples in this glorious twilight, shall never fade,
Before the last fiery hearth that is ablaze within my nation is extinguished.
For That is the star of my nation, and it will forever shine;
It is mine; and solely belongs to my valiant nation.

Frown not, I beseech you, oh thou coy crescent,
But smile upon my heroic race! Why the anger, why the rage?
Our blood which we shed for you will not be worthy otherwise;
For freedom is the absolute right of my God-worshipping nation.
I have been free since the beginning and forever shall be so.
What madman shall put me in chains! I defy the very idea!
I'm like the roaring flood; powerful and independent,
I'll tear apart mountains, exceed the heavens 3 and still gush out!

The lands of the West may be armored with walls of steel,
But I have borders guarded by the mighty chest of a believer.
Recognize your innate strength, my friend! And think: how can this fiery faith ever be killed,
By that battered, single-fanged monster you call "civilization"?

My friend! Leave not my homeland to the hands of villainous men!
Render your chest as armor and your body as trench! Stop this disgraceful rush!
For soon shall come the joyous days of divine promise...
Who knows? Perhaps tomorrow? Perhaps even sooner!

View not the soil you tread on as mere earth - recognize it!
And think about the shroudless thousands who lie so nobly beneath you.
You're the noble son of a martyr, take shame, hurt not your ancestor!
Unhand not, even when you're promised worlds, this paradise of a homeland.

What man would not die for this heavenly piece of land?
Martyrs would gush out should one simply squeeze the soil! Martyrs!
May God take my life, all my loved ones and possessions from me if He will,
But may He not deprive me of my one true homeland for the world.

Oh glorious God, the sole wish of my pain-stricken heart is that,
No heathen's hand should ever touch the bosom of my sacred Temples.
These adhans, whose shahadahs are the foundations of my religion,
May their noble sound last loud and wide over my eternal homeland.

For only then, shall my fatigued tombstone, if there is one, prostrate 5 a thousand times in ecstasy,
And tears of fiery blood shall flow out of my every wound,
And my lifeless body shall gush out from the earth like an eternal spirit,
Perhaps only then, shall I peacefully ascend and at long last reach the heavens.

We offer free images of the Turkey Flag in four sizes (small, medium, large, and high resolution). These images are distributed royalty free for both personal and educational use and are ideal for use in projects and on websites. If you choose to use one of our images, attribution is appreciated, but not required.

The following html code snippets can be copied and pasted to add an image of the Turkey Flag to your website: