Our indoor flags are finished with a pole hem and your choice of with or without golden fringe. Gold fringe is the traditional way to display an indoor flag, however, some people choose without fringe for a simple and clean look that is also less expensive. If you are looking for a complete indoor presentation set, our Build Your Own Indoor International Flag Set program allows you to select a durable nylon indoor St. Vincent & Grenadines Flag and choose between premium quality poles, bases, and ornaments, and tassel. For indoor applications, most buyers choose a 3ft. x 5ft. flag with an 8ft. pole, however, if you have a low ceiling, you may opt for a 7ft. pole, which is designed to work with drop ceilings. If you are looking for a very substantial international flag display, our 4ft. x 6ft. indoor flags can be paired with a 9ft. pole for our largest indoor display option.

Our outdoor international flags are finished with a canvas header and brass grommets and are offered in four sizes: 2ft. x 3ft., 3ft. x 5ft., 4ft. x 6ft., and 5ft. x 8ft., to fit any sized flagpole. Typically, outdoor flags are flown outside of government organizations, businesses, and institutions on in-ground and wall-mount flagpoles, however, some people also buy these flags to display their international pride at home. If you are looking for a wall-mount St. Vincent & Grenadines flag set to display outside of your home, our Build Your Own Outdoor International Flag Set program will allow you to choose between premium quality 6ft. poles and brackets to display the St. Vincent & Grenadines Flag on your front porch. Outdoor flags can also be displayed indoors on interior walls of your home with screws anchored in the wall to attach to the grommets. 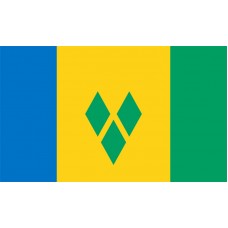 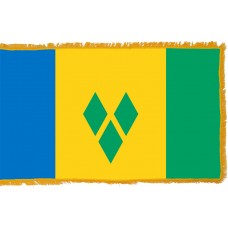 History of the St. Vincent and Grenadines Flag

St. Vincent and Grenadines is a country in the Southern Caribbean that consists of the main island, which is St. Vincent and a chain of smaller islands. There are over 32 islands (only nine of which are inhabited) and cays (low bank of reef or coral) that make up St. Vincent. The most populated city and the capital of St. Vincent and Grenadines is called Kingstown. Kingstown is also referred to as the "City of Arches" as it is home to over 400 arches. The second largest island is Bequia which is also referred to as "Island of the Clouds." The island was given the name "St. Vincent" by Christopher Columbus when he discovered it on January 22nd, 1498 and named it after the Spanish Saint, "Saint Vincent of Saragossa." Grenadines is derived from the Spanish word for pomegranate.

The first inhabitants of St. Vincent and Grenadines were the Island Caribs who did not allow any European settlements until 1719. In 1627, the British claimed the island of St. Vincent, but it was actually the French who established the first colony at "Barrouallie" in 1719. Between 1754-1763, during the 7 years' war, the British gained control of the island after the French ceded it following the Treaty of Paris.

The British control caused a lot of conflict and friction between the British and the Island Caribs and it led to the "First Carib War" which resulted in a lot of Caribs being exiled. In 1779, the French, once again, gained control of the island until 1783, when the British regained it following the Treaty of Versailles, which caused conflict and battles again between the British and the Black Caribs from 1783-1796. On October 27th, 1969 St. Vincent and Grenadines was granted by Britain "Associate Statehood" and was granted full independence on October 2nd, 1979, following a referendum.

St. Vincent and Grenadines economy revolves around agriculture (mainly banana production) and tourism. It is a popular tourist destination mainly for snorkeling, fishing, and sailing, especially the Tobago Cay Archipelago which consists of five small islands. The capital Kingstown is another popular destination and is known for all its churches. The country became more of a tourist attraction following the "Pirates of the Caribbean" movies, that helped to expose the country.

We offer free images of the St. Vincent & Grenadines Flag in four sizes (small, medium, large, and high resolution). These images are distributed royalty free for both personal and educational use and are ideal for use in projects and on websites. If you choose to use one of our images, attribution is appreciated, but not required.

Add the St. Vincent & Grenadines Flag to your Website:

The following html code snippets can be copied and pasted to add an image of the St. Vincent & Grenadines Flag to your website: