We carry authentic Vietnam Flags in both indoor and outdoor varieties. Our flags are proudly made in the United States from durable nylon and are printed with vibrant long-lasting inks. The Vietnam national flag is often displayed at embassies, outside of businesses associated with Vietnam, and at the homes of people who take great pride in their Vietnamese heritage.

Our indoor flags are finished with a pole hem and your choice of with or without golden fringe. Gold fringe is the traditional way to display an indoor flag, however, some people choose without fringe for a simple and clean look that is also less expensive. If you are looking for a complete indoor presentation set, our Build Your Own Indoor International Flag Set program allows you to select a durable nylon indoor Vietnam Flag and choose between premium quality poles, bases, and ornaments, and tassel. For indoor applications, most buyers choose a 3ft. x 5ft. flag with an 8ft. pole, however, if you have a low ceiling, you may opt for a 7ft. pole, which is designed to work with drop ceilings. If you are looking for a very substantial international flag display, our 4ft. x 6ft. indoor flags can be paired with a 9ft. pole for our largest indoor display option.

Our outdoor international flags are finished with a canvas header and brass grommets and are offered in four sizes: 2ft. x 3ft., 3ft. x 5ft., 4ft. x 6ft., and 5ft. x 8ft., to fit any sized flagpole. Typically, outdoor flags are flown outside of government organizations, businesses, and institutions on in-ground and wall-mount flagpoles, however, some people also buy these flags to display their international pride at home. If you are looking for a wall-mount Vietnam flag set to display outside of your home, our Build Your Own Outdoor International Flag Set program will allow you to choose between premium quality 6ft. poles and brackets to display the Vietnam Flag on your front porch. Outdoor flags can also be displayed indoors on interior walls of your home with screws anchored in the wall to attach to the grommets.

In addition to the flags we offer for purchase, we maintain an archive of the audio and lyrics of the Vietnam National Anthem, historical information about the Vietnam flag, demographic data about Vietnam, and free high resolution images of the Vietnam flag for use in projects and on websites. 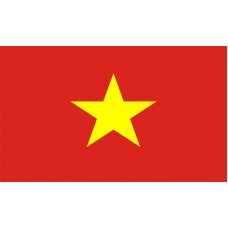 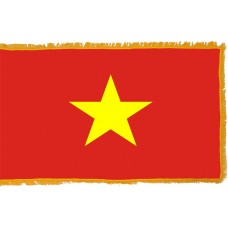 History of the Vietnamese Flag

The Vietnam Flag features a red field with a large gold 5-pointed star in the center. The red color represents the blood shed in the fight for independence and the goals of the social revolution, the yellow color represents the "color of our skin", and the 5-pointed star represents the five different classes of the people in Vietnam, which are, Intellectuals, Farmers, Workers, Businesspeople, and Military Personnel. The Vietnam flag was first designed and created in 1941 by leader Nguyen Huu Tien to resist against the Japanese occupation. In a poem written, Tien stated that:

"All those of red blood and yellow skin. Together we fight under the nation's secured flag. The flag is soaked with our crimson blood, shed for the nation. The yellow star is the color of our race's skin. Stand up, quickly! The nation's soul is calling for us intellectuals peasants, workers, traders and armymen united as a five-pointed yellow star."

The Vietnam flag was officially adopted on September 5th, 1945. Vietnam is a country that is located in Southeast Asia and shares borders with China, Laos, Cambodia, Gulf of Thailand, Philippines, Malaysia, and Indonesia. The capital and second largest city in Vietnam is called Hanoi and the largest city is called Ho Chi Minh. Vietnam is a country that had 1,000 years of independence before it came under the rule of China, Japan and France. In 1884, the whole country came under the rule of France and in 1887, it became part of French Indochina.

The French maintained control and their colonies of Vietnam until WWII, when the Japanese invaded French Indochina in 1940. In 1941, leader Ho Chi Minh sought independence from the French and from Japanese occupation and declared independence on September 2nd, 1945, following Japan's military defeat. This led to the First Indochina War which began on December 19th, 1946 and ended on July 20th, 1954 when French Indochina was dissolved into three separate countries, which were Vietnam and the Kingdoms of Cambodia and Laos. At the same time, Vietnam was also divided into the North and South administrative regions.

Vietnam's economy is largely based on the agriculture and manufacturing. Tourism also contributes to the economy with the number of tourists greatly increasing each year. It is home to many beautiful attractions with the main attraction being "Ha Long Bay" which translates as "Bay of Descending Dragons" and consists of thousands of islands and islets and limestone pillars. It is also home to the "Hang Son Doong" which is the world's largest cave and has its own river and jungle. Another main attraction is the "Imperial City" and the fortress and palace that was built in 1362 and took approximately 203 years to complete. The fortress represents Vietnam's wealth and its power as boars carried the materials to build the fortress.

Armies of Vietnam, forward!
With one single determination to save our Fatherland,
Our hurried steps resound on the long and arduous road.
Our flag, red with the blood of victory, bears the spirit of the country.
The distant rumbling of the guns mingles with our marching song.
The path to glory is built by the bodies of our foes.
Overcoming all hardships, together we build our resistance bases.
Ceaselessly for the People's cause let us struggle,
Let us hasten to the battlefield!
Onward! All together advancing!
For one eternal Vietnam.

Soldiers of Vietnam, forward!
The gold star afluttering
Leading the people of our native land out of misery and suffering.
Let us join our efforts in the fight to build a new life.
Arise and break these chains.
For too long have we swallowed our hatred.
Be ready for all sacrifices and life will be radiant.
Ceaselessly for the People's cause, let us struggle,
Let us hasten to the battlefield!
Onward! All together advancing!
For one eternal Vietnam.

We offer free images of the Vietnam Flag in four sizes (small, medium, large, and high resolution). These images are distributed royalty free for both personal and educational use and are ideal for use in projects and on websites. If you choose to use one of our images, attribution is appreciated, but not required.

The following html code snippets can be copied and pasted to add an image of the Vietnam Flag to your website: