We carry authentic Turkmenistan Flags in both indoor and outdoor varieties. Our flags are proudly made in the United States from durable nylon and are printed with vibrant long-lasting inks. The Turkmenistan national flag is often displayed at embassies, outside of businesses associated with Turkmenistan, and at the homes of people who take great pride in their Turkmenistan heritage.

Our indoor flags are finished with a pole hem and your choice of with or without golden fringe. Gold fringe is the traditional way to display an indoor flag, however, some people choose without fringe for a simple and clean look that is also less expensive. If you are looking for a complete indoor presentation set, our Build Your Own Indoor International Flag Set program allows you to select a durable nylon indoor Turkmenistan Flag and choose between premium quality poles, bases, and ornaments, and tassel. For indoor applications, most buyers choose a 3ft. x 5ft. flag with an 8ft. pole, however, if you have a low ceiling, you may opt for a 7ft. pole, which is designed to work with drop ceilings. If you are looking for a very substantial international flag display, our 4ft. x 6ft. indoor flags can be paired with a 9ft. pole for our largest indoor display option.

Our outdoor international flags are finished with a canvas header and brass grommets and are offered in four sizes: 2ft. x 3ft., 3ft. x 5ft., 4ft. x 6ft., and 5ft. x 8ft., to fit any sized flagpole. Typically, outdoor flags are flown outside of government organizations, businesses, and institutions on in-ground and wall-mount flagpoles, however, some people also buy these flags to display their international pride at home. If you are looking for a wall-mount Turkmenistan flag set to display outside of your home, our Build Your Own Outdoor International Flag Set program will allow you to choose between premium quality 6ft. poles and brackets to display the Turkmenistan Flag on your front porch. Outdoor flags can also be displayed indoors on interior walls of your home with screws anchored in the wall to attach to the grommets. 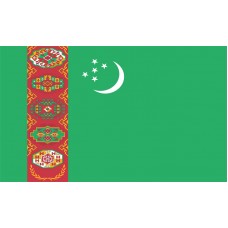 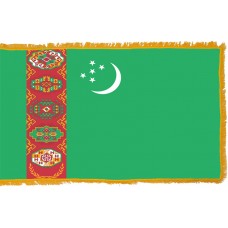 History of the Turkmenistan Flag

The Turkmenistan Flag features a green field with a red vertical band on the left-hand side of the flag that displays five carpet guls (medallion-like designs that are traditional of Turkmenistan’s hand-woven carpets) that sit above two olive branches. At the top of the flag, on the right-hand side of the red band, there is a white crescent with five white 5-pointed stars next to it. The green color is symbolic of Islam, the crescent is also a symbol of Islam as well as representing hope and a bright future for the country, and the five white stars represent the five regions of Turkmenistan which are, Ahal, Balkan, Dashoguz, Lebap, and Mary (which was formerly known as Merv). The red band that features the five guls represent Turkmenistan's famous carpet industry and are also a national symbol as well as being symbolic of the five major tribes of the country which are, Teke, Yomut, Saryk, Chowdur, and Arsary. The olive branches that are below the guls represent the "status of permanent neutrality." The Turkmenistan Flag was first adopted on February 19th, 1992 and was modified on January 24th, 2001 and is considered to be one of the most detailed flags in the world. Prior to this flag, Turkmenistan used the flag of the Russian Empire.

Turkmenistan (which translates as "Land of the Turkmen") is a landlocked country that is located in Central Asia. It shares borders with Kazakhstan, Afghanistan, Uzbekistan, and the Caspian Sea. The capital and largest city of Turkmenistan is called Ashgabat which also translates as "City of Love" or "City of Devotion." The majority of the country (70%) consists of the "Karakum Desert" which translates as "Black Sands."

Turkmenistan is a country that has been at the center of many civilizations throughout history. It has been under the rule of Persian Empires, Mongol Empires, Alexander the Great, Turkic Warriors, and under the control of the Soviet Union. Turkmenistan finally gained independence on 27th October 1991, following the collapse of the Soviet Union. This day is a national holiday that is widely celebrated.

Turkmenistan is very wealthy in natural resources, such as gas and is home to one of the largest reserves of natural gas in the world. The "Darvaza Gas Crater," also referred to as "Door to Hell" or "Gates of Hell" is a gas field that collapsed in 1971 into an underground cavern and became a crater. This gas crater is often visited by tourists. Turkmenistan is also one of the largest cotton producers in the world.

Turkmenistan is home to many historical sites that are gradually becoming more popular and more visited. The ancient oasis-city, Merv (now known as Mary) that was inhabited from approximately 4,000 years ago is still home to many monuments that are regularly visited. The monument of Neutrality which is also known as "The Tripod" and located in the capital, Ashgabat is another popular attraction that was built to represent the country's neutrality.

I am ready to give life for native hearth
The spirit of ancestors descendants are famous for
My land is sacred. My flag flies in the world
A symbol of the great neutral country flies.

The forever great creation of the people
Native land, sovereign state
Turkmenistan, light and song of soul
Long live and prosper for ever and ever!

My nation is united and in veins of tribes
Ancestors' blood, undying flows
Storms and misfortunes of times are not dreadful for us
Let us increase fame and honour!

The forever great creation of the people
Native land, sovereign state
Turkmenistan, light and song of soul
Long live and prosper for ever and ever!

We offer free images of the Turkmenistan Flag in four sizes (small, medium, large, and high resolution). These images are distributed royalty free for both personal and educational use and are ideal for use in projects and on websites. If you choose to use one of our images, attribution is appreciated, but not required.

The following html code snippets can be copied and pasted to add an image of the Turkmenistan Flag to your website: