Our indoor flags are finished with a pole hem and your choice of with or without golden fringe. Gold fringe is the traditional way to display an indoor flag, however, some people choose without fringe for a simple and clean look that is also less expensive. If you are looking for a complete indoor presentation set, our Build Your Own Indoor International Flag Set program allows you to select a durable nylon indoor Dominican Republic Flag and choose between premium quality poles, bases, and ornaments, and tassel. For indoor applications, most buyers choose a 3ft. x 5ft. flag with an 8ft. pole, however, if you have a low ceiling, you may opt for a 7ft. pole, which is designed to work with drop ceilings. If you are looking for a very substantial international flag display, our 4ft. x 6ft. indoor flags can be paired with a 9ft. pole for our largest indoor display option.

Our outdoor international flags are finished with a canvas header and brass grommets and are offered in four sizes: 2ft. x 3ft., 3ft. x 5ft., 4ft. x 6ft., and 5ft. x 8ft., to fit any sized flagpole. Typically, outdoor flags are flown outside of government organizations, businesses, and institutions on in-ground and wall-mount flagpoles, however, some people also buy these flags to display their international pride at home. If you are looking for a wall-mount Dominican Republic flag set to display outside of your home, our Build Your Own Outdoor International Flag Set program will allow you to choose between premium quality 6ft. poles and brackets to display the Dominican Republic Flag on your front porch. Outdoor flags can also be displayed indoors on interior walls of your home with screws anchored in the wall to attach to the grommets. 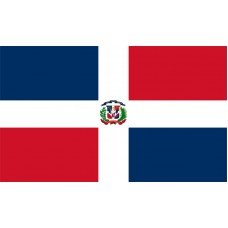 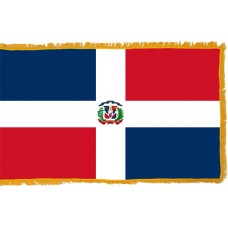 History of the Dominican Republic Flag

The Dominican Republic Flag represents the country's successful fight for freedom. The flag's design is based around a white cross, which symbolizes salvation. Around the cross are four rectangles, colored red for blood and blue for liberty. At the center of the flag is the country's coat of arms.

The Dominican Republic Flag was designed by Jose Joaquin Puello. Puello is a national hero in the country, because he was one of the few black heroes of the War of Independence. He had been a Colonel in the Haitian army, and he refused to take part in their planned takeover of his country's government. Puello was extremely popular among black and mulatto soldiers and the general population.

Haiti and the Dominican Republic are two countries which make up the island of Hispaniola. This entire island was a slave colony under Spanish control from 1492. Christopher Columbus claimed the island for Spain as one of his first American conquests. It is the second largest island in the Caribbean Sea, after Cuba.

Like many other Caribbean islands, Hispaniola provided great wealth for its colonizers from sugar plantations. These were worked by slaves, mainly from western Africa. They cleared forested areas to grow sugar cane. The Dominican Republic's climate is both hot and wet for much of the year, which is ideal for growing sugar cane.

It is thought that Columbus landed in the country by accident. Its native inhabitants were the Taino people, who were not hostile to their new visitors. With their help, Columbus set up the Caribbean's earliest colonies in what is now the Dominican Republic.

The country is very popular with tourists, as it has beautiful beaches and some spectacular scenery. Like the rest of the Caribbean area, it is prone to hurricanes. It is a much more popular destination than its neighbor, Haiti, which is on the western end of the island of Hispaniola.

There are about five million visitors to the Dominican Republic every year. As the country's population is about 10 million people, this represents a tremendous boost to its economy. It is a very popular golfing destination, and is valued as a destination to get married. It also has rain forest areas and the tallest mountain in the Caribbean.

From its roots in the colonial era, the Dominican Republic has prospered into a thriving country. Its flag is a symbol to its people of how far they have come as a nation. The Dominican Republic Flag represents salvation, liberty and the blood of its heroes. The country's people are very proud of their heritage and their beautiful country.

Valiant Quisqueyans, let us raise
Our song with vivid emotion
And let's show to the face of the world
Our undefeated, glorious flag.

Hail, the people who strong and intrepid,
Into war launched itself unto death!
When in warfare challenge of death,
Her slavery chains she broke.

None people deserves to be free
If he is slave, indolent and servile;
If in his heart the flame is not burning,
Which was sparked by heroic manliness.

But Quisqueya, the indomitable and brave,
Her head will always lift up high,
For if she were enslaved a thousand times,
Many more times shall she know how to be free.

If it will be exposed to ruse and deceit
Unto contempt of a real imposer,
On to Las Carreras! Beler! ...it were places
Where the traces of glory are found.

Where on the top of the heroic bastion,
The word of the libarated became flesh,
Where the genius of Sanchez and Duarte
Taught to be free or to die.

And if an unattended leader the splendor
Of these glorious events could ignore,
One has seen in Capotillo in the war
The flag of fire wave.

And the fire that lets the proud lion
Of Castilla become stupefied,
Removes him from the glorious beaches
Where the crossed banner waves.

Compatriots, let us proudly
Show our face, from today prouder than ever;
Quisqueya may be destroyed
But a slave again, never!

It is a sanctuary of love that every character
Of the fatherland feels alive!
And it is his coat of arms, the right;
And it is his device: be free or die.

Freedom that still rises cool-bloodedly
The victory in her triumphal car.
And the clarion of war re-echoes
Proclaiming his immortal glory.

We offer free images of the Dominican Republic Flag in four sizes (small, medium, large, and high resolution). These images are distributed royalty free for both personal and educational use and are ideal for use in projects and on websites. If you choose to use one of our images, attribution is appreciated, but not required.

The following html code snippets can be copied and pasted to add an image of the Dominican Republic Flag to your website:

Geographical Location of The Dominican Republic